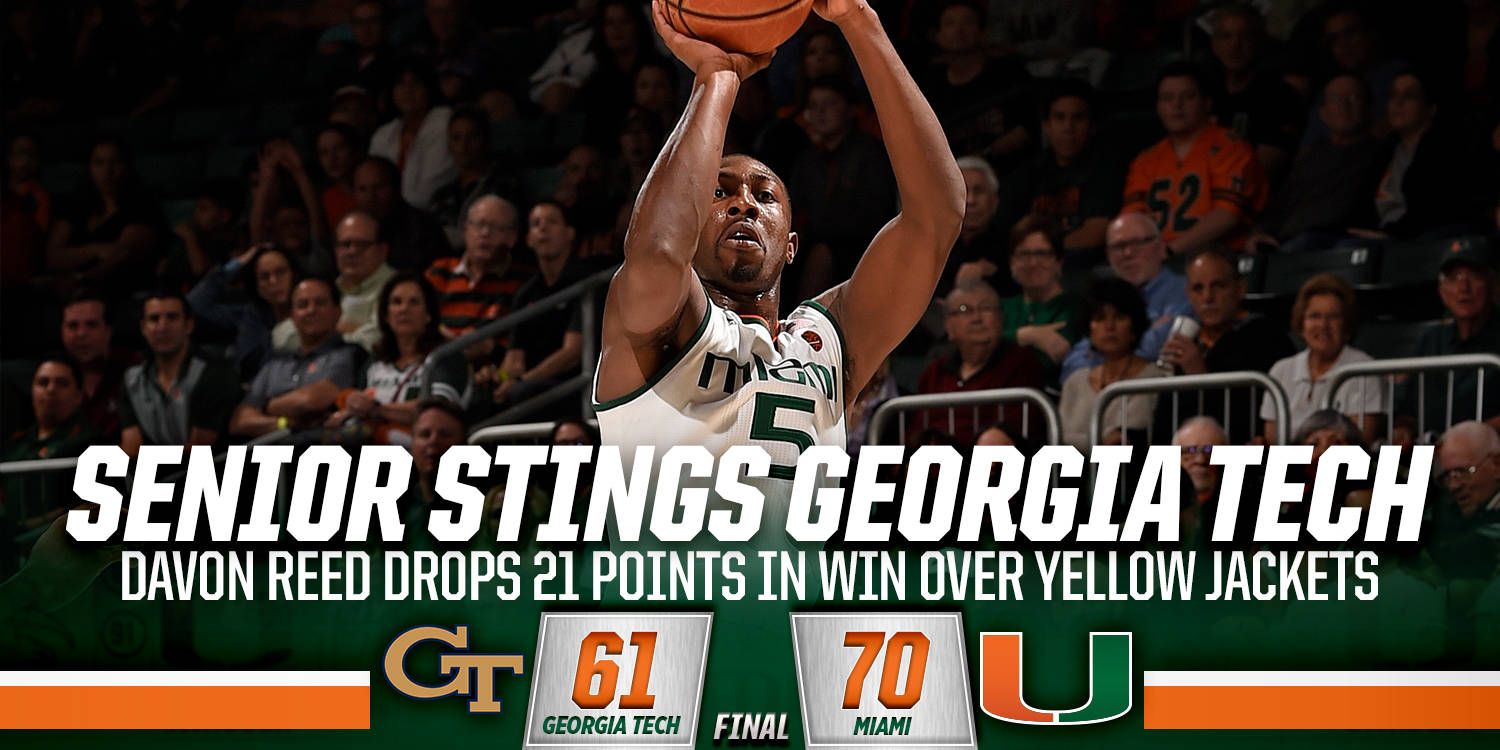 CORAL GABLES, Fla. – Down to seven scholarship players for most of the second half Wednesday night, the Miami Hurricanes earned a hard-fought ACC victory over Georgia Tech, 70-61, at the Watsco Center.

With junior Ja’Quan Newton serving the first of a three-game suspension and sophomore Ebuka Izundu missing most of the second half with leg cramps, the Hurricanes rallied to secure their 25th home win in the last 27 games.

Facing a six-point deficit at the half, Georgia Tech tied the game at 43-43 on a three-pointer by Quinton Stephens early in the second, forcing head coach Jim Larrañaga to call a timeout.

After an impressive take to the rim by Vasiljevic that put Miami ahead by a bucket at 45-43, Georgia Tech took its first lead since 19-18 on a three-pointer by Josh Okogie.

The lead was short-lived.

Reed connected on his third triple of the night with 13:27 left to put Miami back on top two possessions later, jumpstarting a 14-4 run over the next five minutes in a game-deciding stretch.

After a Yellow Jacket turnover on the ensuing possession, Vasiljevic found Huell in the paint for a thunderous dunk with 12:10 left in the contest.

Another dunk from Huell bumped the lead to six, and a three-pointer from Vasiljevic made it 58-50 with 8:54 remaining.

During Tuesday’s practice, Larrañaga was planning on playing with just six scholarship players. The staff game-planned without Huell, due to a foot injury suffered at Louisville, or Bruce Brown, who was diagnosed with tonsillitis earlier in the week.

After the game, he credited the team’s medical staff for getting the duo ready for the game.

“How he was able to come in and go 4-for-7 from the field and give us 21 minutes on a bad foot, it was just a tremendous effort,” Larrañaga said of Huell.

A 27-3 disparity in free throw attempts helped the Hurricanes earn another win in front of 7,111 fans.

“Against the ninth defense in the country, we shot 55 percent from the field and 50 percent from three…an outstanding offensive performance,” Larranaga said. “Defensively, yesterday, I couldn’t have emphasized it more. Stay out of foul trouble.”

“I think we played aggressive tonight,” Reed said. “We were able to get to the backboards and our overall aggression and attack mode, I think that led to us getting more foul shots than them.”

Vasiljevic had his sixth double-digit output of the season and first since Jan. 4 vs. Syracuse.

“Coach emphasized throughout the week to visualize how I would play in practice,” Vasiljevic said. “This morning I woke up feeling confident.”

Reed had his sixth 20-point game of the season in the victory.

Playing without its second-leading scorer in Newton (14.7 points per game), the Hurricanes offense impressed in the opening period.

Trailing 5-0 early, Miami ripped off an 11-3 run to take its first lead of the ballgame. A tip-in slam from Murphy tied the game 5-5, and a hook shot in the lane by Izundu with 14:49 remaining put Miami ahead for the first time at 9-8.

The Hurricanes stretched their first-half lead as large as eight at 34-26 with 2:57 remaining in the first period on a free throw by Anthony Lawrence.

Miami shot 12-of-23 (52 percent) from the field in the first half, including 3-of-7 from three-point range. The hosts started 11-of-12 from the charity stripe and Reed led all Hurricanes with 10 first-half points.

The Canes outrebounded the Yellow Jackets 18-9 in the opening 20 minutes and 31-17 for the game.

Murphy and Vasiljevic each finished the first half with eight points.

Without Newton, Larrañaga decided to use the combination of Reed, Murphy, Izundu, Lawrence and freshman Bruce Brown for the first time this season.
Georgia Tech leading scorer Ben Lammers led all scorers with 11 in the first half. He finished with 15.

Miami’s starters against Georgia Tech were Bruce Brown, Davon Reed, Anthony Lawrence Jr., Kamari Murphy and Ebuka Izundu. This is first game of the season the Hurricanes opened with this group and only the fourth different starting lineup of the season.

Senior guard Davon Reed drained three shots from long distance on his way to his sixth 20-point game of the season (21) against the Yellow Jackets. Reed has knocked down 52 shots from long range in the past 17 games and has hit a three in every game this season (25 games).

The native of New Jersey has now hit multiple 3-pointers in 18 outings, including three-or-more 12 times. He also tied his season-high in rebounds with seven this evening.

Miami improves to 13-8 all-time against Georgia Tech, and 6-4 while playing at the Watsco Center. Head Coach Jim Larrañaga is 6-2 at Miami against the Yellow Jackets, and the Canes have won the past two matchups.

Freshman forward Dewan Huell set his ACC high in scoring (13), while surpassing 10 points for the first time since scoring 14 against Rutgers Nov. 30.

Last night I was thinking to myself we’re going to be without Ja’Quan Newton, probably going to be without Dewan Huell, probably going to be without Bruce Brown. Because Dewan hurt his foot against Louisville and didn’t play, all he did was treatment on Sunday, Monday, Tuesday and today leading right up to the game. How he was able to go 4-for-7 from the field and give us 21 minutes on a bad foot is a tremendous effort. Secondly Bruce showed up Monday morning and our trainer diagnosed him with tonsillitis, and he started on medications, so I though overnight hopefully that will clear up. Tuesday he showed up worse with a 102 temperature, he was feeling awful. So he had no preparation for the game. He or Dewan. And when you play a team like Georgia Tech that does so many interesting things offensively and defensively, our preparation was key. With DJ at the point, Davon at the two, and Anthony Lawrence at the three, Murph at the four and Ebuka Izundo at the five, with only Rodney Miller to back him up. Miraculously our athletic trainers and our doctors did a fantastic job. Our two players, Bruce Brown and Dewan Huell, who are freshmen, who at this point of the year usually hit a wall and are drained, but Bruce played 37 minutes and Dewan played 21.  Against the ninth-ranked defense in the country, we shot 55 percent from field 53 percent from three and 81 percent from the foul line, so it was an outstanding offensive performance. And defensively, yesterday I couldn’t emphasize it more, stay out of foul trouble we only have six scholarship guys.

On the second half…

My job as a coach is to mentor these young men and try to set the right example and send the right messages to them, and for the most part they listen and follow instructions very, very well. But we can’t be with them 100 percent of the time and they have to learn to make good decisions when I’m not looking over their shoulder.  If a guy doesn’t make the right decision, we need to send a message to him that its not acceptable in our program and hopefully the message is heard loud and clear. But they’re kids, they make mistakes whether its on the court or off the court. And we have to discipline them, not punish. Discipline is about teaching, punishing is punitive and you’re putting someone down for their behavior. You have a lot of life ahead of you, so we’re going to help you learn the difference between doing something right and doing something that isn’t.

“I have to give Miami credit, Coach Larrañaga is one of the great coaches of the game, the team is very good, and this is a good win for Miami. We had some empty possessions and when you look at the way they shot the ball against our defense, that’s a recipe for disaster.  We’re very limited, and if we’re not near perfect or perfect, it’s just hard for us. We don’t have that margin for error. We got our butts kicked on the glass and our butts kicked at the free throw line. Due to the fact of our deficiencies and our margin for error is zero, if we aren’t perfect for darn near every possession,it just makes it really hard for us.”

On Ben Lammers’ performance…
“He didn’t play real well today. If he doesn’t play well, then it’s hard for us.  And he hadn’t practiced, so I don’t know if he was off rhythm. He hasn’t practiced based on his ankle. And Q (Quinton Stephens) hasn’t practiced. That’s not an excuse. Guys aren’t practicing because of injuries. There is nothing I can do about that. I have to follow what the athletic trainer and medical staff say. I just think it’s hard when guys don’t practice to keep in rhythm.  It is what it is, guys have to get it done, have to get healthy and have to get it done. Bottom line.”

On shooting only three free throws…
“We got our butts kicked on the glass. If Miami shoots 27 free throws and we shoot three, that’s awfully hard for us to win a game.”