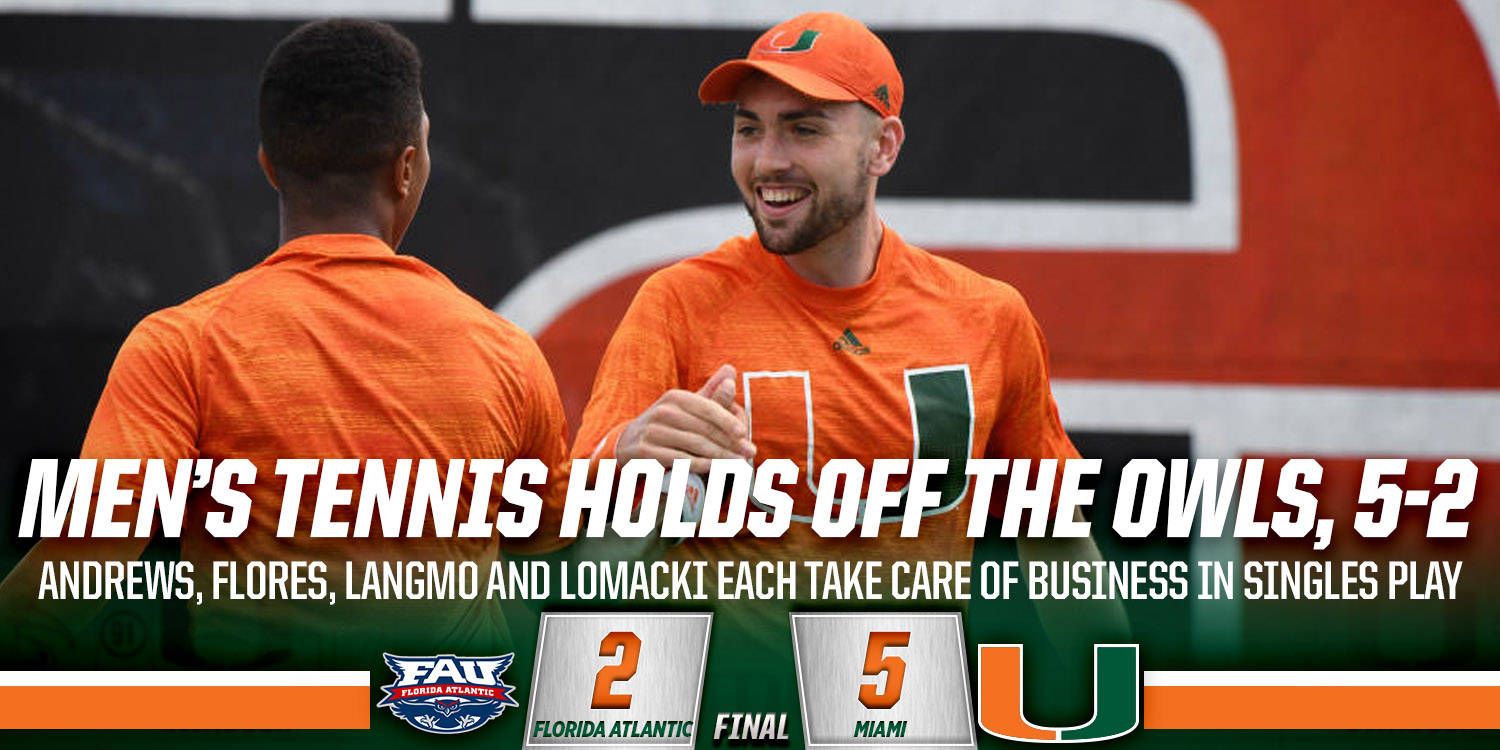 CORAL GABLES, Fla. – The University of Miami men’s tennis team earned its third victory of the season, 5-2, against the Florida Atlantic University Sunday at the Neil Schiff Tennis Center.

“Like I said [after falling to Mississippi State on Friday] a good practice was necessary for us, which we had yesterday. We actually had a really good practice as a team and we addressed some of the things that we have been talking about,” head coach Aljosa Piric said. “We came out today and had good energy and purpose, to beat a solid FAU team.”

The Hurricanes (3-2) opened the match strong with a pair of doubles victories to take the one point advantage, as well as momentum into singles play.

“I think we played well at 2 and 3 doubles, especially at No. 3, where [junior] Christian [Langmo] and [sophomore] Dane [Dunlap] played really well. No. 2 doubles went back and forth a little bit, but [junior] Piotr [Lomacki] came out huge under pressure,” Piric said. “We talk about being poised under pressure and that match right there was a perfect example of that. That match got us the doubles point which obviously gave us a little bit of confidence.”

At No. 3, Langmo and Dunlap got the day started, taking down Stefan Burnett and Arthur Stefani, 6-2.

At No. 2, juniors Lomacki and Nile Clark got the Canes on the board first, after defeating Felipe Frias and Anthony Schohn, 6-3.

Court one ended with Remi Chancerel and Andrei Morin-Kougoucheff leading the senior tandem of Jesse Flores and Max Andrews, 5-4.

The Hurricanes continued to hold the advantage in singles play, with five of six competitors – Lomacki, Flores, Langmo, Andrews and Dunlap– taking opening set victories in their respected matches.

At No. 4, Andrews gave Miami a two-point advantage after defeating Frias, 6-3, 6-1. Moments later, No. 63 Lomacki earned his third dual match victory of the season and the Canes third-point of the match, downing Morin-Kougoucheff, 6-4, 6-2.

On court two, a battle took place between Langmo and Chancerel, with the Owls junior opening the match strong with a 4-1 advantage. However, Langmo would not back down as he stormed back to take the opening set, 6-4.

In a back and forth second set, Langmo once again found himself trailing. This time down 3-4 in the tiebreaker, the junior once again rallied a comeback, taking the final four points, as well as the match, 6-4, 7-6 (7-4).

“I have to give credit, our guys played really well. Piotr took care of business; Max played well today, and really took care of his court.” Piric said. “Christian then got us a crucial point there to close the match out. He had to play a tough tiebreaker, but he came out with a couple tough points under pressure.”

With the match already clinched, Miami looked to gain some bonus points at No. 3 and 6.

After taking the first set, 6-3, Flores dropped the second set to Schohn, 1-6. Trailing, 3-5, in the final set, the senior rallied from behind to force a tiebreaker. The Native of Oakville, Ont., Canada, earned the tiebreaker and Miami’s fifth point of the match, 7-6 (7-5).

Miami will return to the Neil Schiff Center Sunday, Feb. 19 at 12 p.m., as the Canes open ACC play against their rival Clemson University.