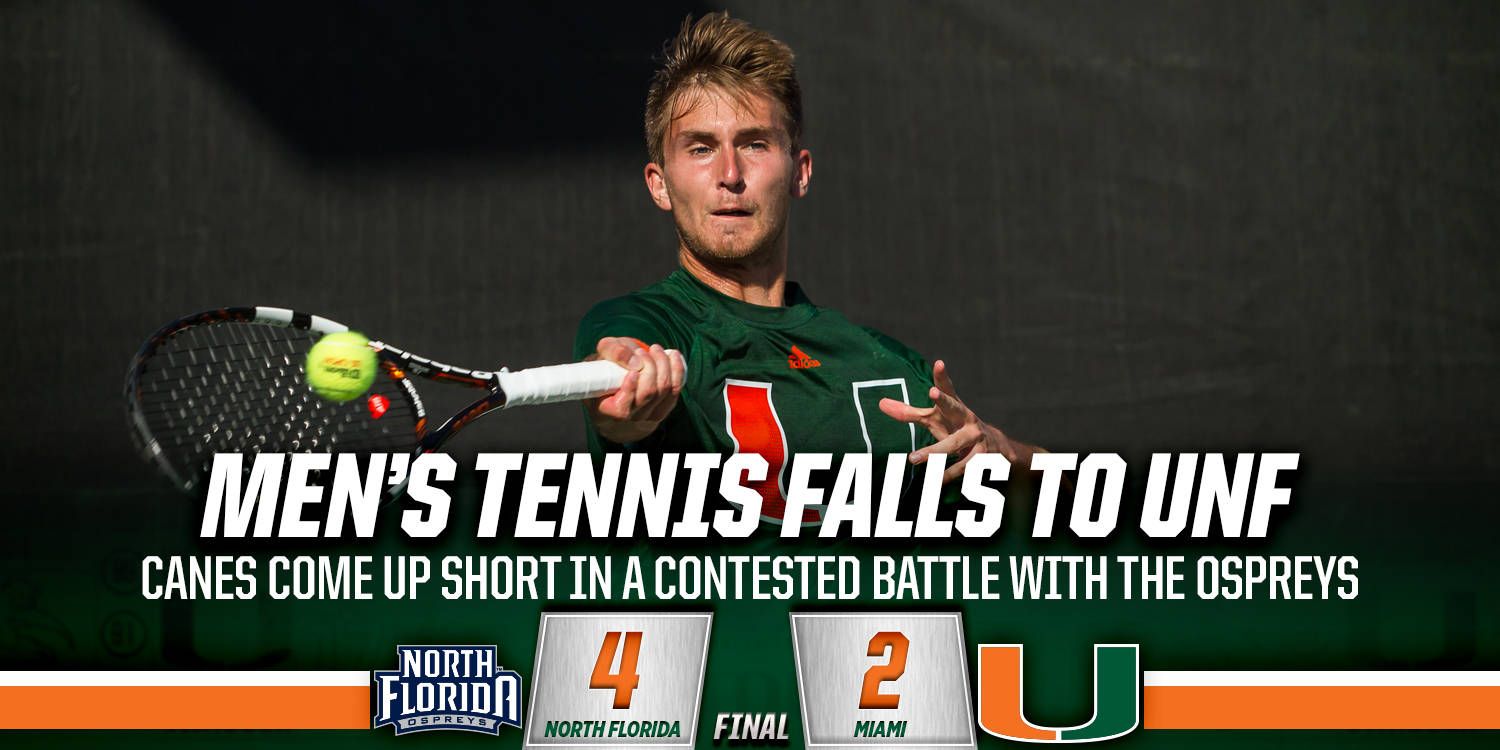 CORAL GABLES, Fla. – The University of Miami men’s tennis team dropped its first match of the season, 4-2, against the University of North Florida Sunday at the Neil Schiff Tennis Center.

Piotr Lomacki earned a pair of victories in both doubles and singles play for Miami (1-1) but it was not enough to take down the Ospreys (2-2).

“North Florida, I have to give them credit. They came into our house and played us well. They started off in doubles with a lot of energy,” head coach Aljosa Piric said. “They have a really good doubles team–a couple of highly national ranked teams in there–but our guys responded. Overall, I was happy with our doubles effort, I was happy with the energy we brought. It came down to a couple tiebreakers at No. 1 and 3. We lost both of those. Credit to North Florida for taking the first point.”

In a closely contested match from start to finish, the Hurricanes got off on the right foot, as juniors Lomacki and Nile Clark teamed up to defeat Jefta Kecic and Yannick Zuern, 7-5.

On courts one and three, the senior tandem of Max Andrews and Jesse Flores, along with junior Christian Langmo and sophomore Dane Dunlap, both came from behind to force tiebreakers in their respected matches.

Trailing 3-5, Langmo and Dunlap won the next two games and entered a tiebreaker, after splitting the following two games. In the tiebreaker, the pair dropped the match, 6-7(1), to Jonathan Deautriell and Sahil Deshmukh.

On court one, the seniors battled No. 12 Jack Findel-Hawkins and Lasse Muscheites, ultimately falling, 6-7(3).

Trailing 1-0 in the match, the Hurricanes turned to singles play to get on the board. No. 86 Lomacki quickly tied the match, defeating No. 51 Findel-Hawkins in a straight set, 6-1, 6-1.

“In singles, I think our guys came out physically engaged and ready to play. However, as we just talked about as a team, when you are playing very close matches it comes down to a few points, critical points, “ Piric said. “We just have to get better at those, better at embracing pressure and stepping up in pressure moments. Believing in our preparation and trusting in ourselves to do the right things. And as the season progresses we are going to keep talking about that and working on that. And we will be looking to turn that around soon.”

At No. 6 Dunlap earned his second career dual match victory and evened the match back up at two a piece, defeating Jonathan Deautriell, 7-5, 2-6, 6-2.

After taking the first set, 7-5, Flores dropped the next two against Zuern, falling, 5-7, 2-6, 3-6. Zuern’s victory earned the Ospreys match point, as Andrews and Langmo remained battling their opponents.

Muscheites sealed the match for UNF, with a 7-5, 6-7 (0), 6-4 victory over Andrews. At the point the match was sealed, Langmo and Kecic had just finished the second tiebreaker of their match, 7-6 (2), 6-7 (4), when North Florida was declared the victors. Their match remained unfinished.

Following the loss Miami returns to the practice courts for the next two weeks before facing Troy University, in another home match, on Saturday, Feb. 4 at 12 p.m.