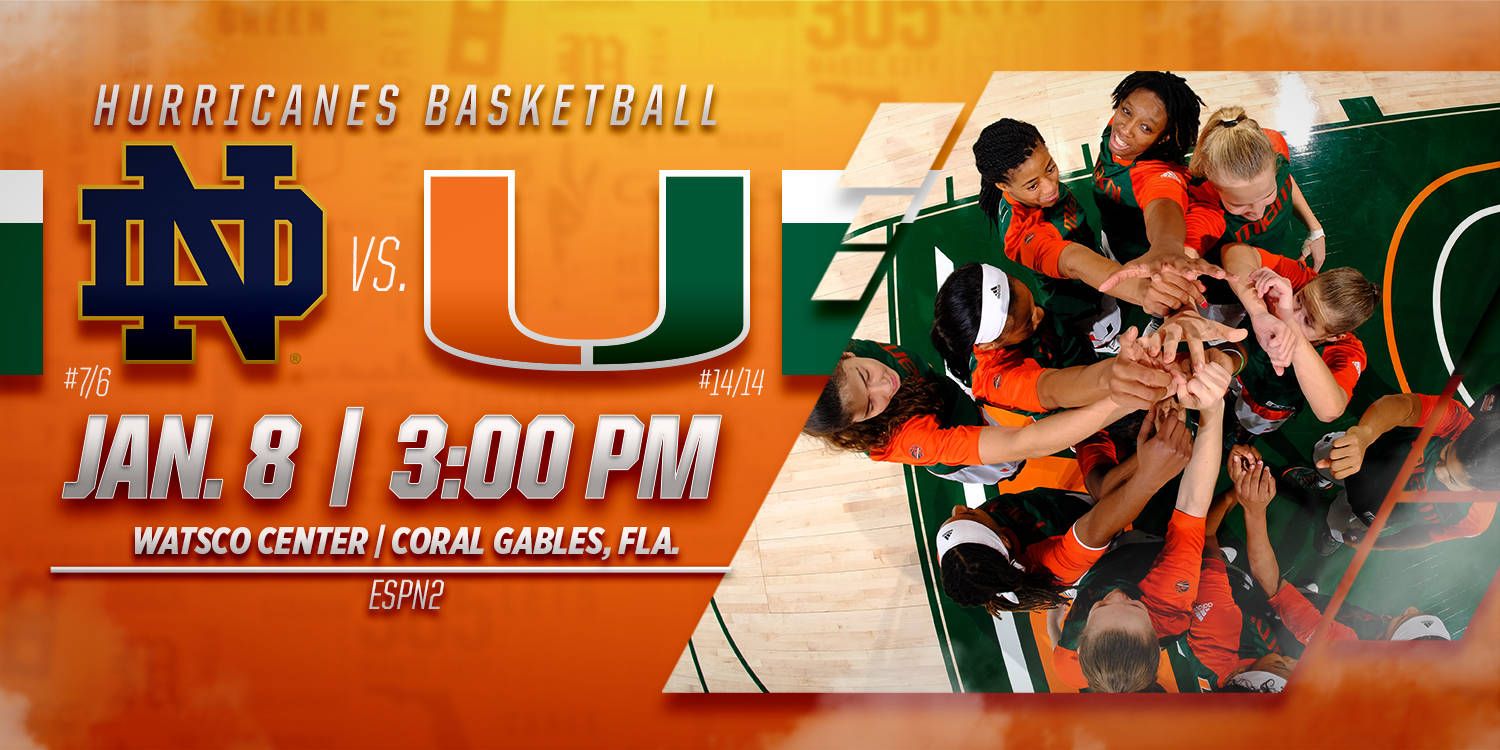 CORAL GABLES, Fla. – After notching a pair of road victories to open 2017, including one over a top-25 opponent, the University of Miami women’s basketball team will play its first home game of the new year Sunday afternoon against No. 7/6 Notre Dame.

The Hurricanes, who are 7-1 at home this season, have a 4-17 all-time mark against the Fighting Irish, including a 2-6 record over the past eight meetings. Most recently, No. 2/3 Notre Dame posted a 78-67 victory against Miami in the ACC Tournament semifinals last season on March 5, 2016.

Miami is coming off its second top-25 road triumph of the season, a 67-64 win at RV/No. 23 NC State Thursday night in Raleigh, N.C. Redshirt senior forward Keyona Hayes recorded her third double-double of the season, leading all players in points (18) and rebounds (10). Senior guard Adrienne Motley added 16 points for the Hurricanes, who fell behind by 14 points in the first period and then scored 31 of the next 40 points and never trailed again.

Notre Dame, picked to win the ACC and ranked first in the AP Poll to open the season, heads into Sunday’s matchup with a 14-2 (2-1 ACC) record. The Fighting Irish are led by sophomore guard Arike Ogunbowale’s 15.1 points per game, while junior forward Brianna Turner, an Associated Press Preseason First Team All-American, averages 14.9 points and a team-best 7.1 rebounds.

The matchup between Miami and Notre Dame will be broadcast live on ESPN2 with Beth Mowins and Debbie Antonelli on the call, and is available on WatchESPN HERE. The action will also be carried live on WVUM 90.5 FM HERE, while live stats for the game can be found HERE.

Miami will have a special guest captain from the Austen Everett Foundation join the team Sunday. Additionally, team posters and schedule cards will be available at the marketing table by the main entrance.

Following its matchup with the Fighting Irish, Miami will host No. 18/18 Virginia Tech, the ACC’s lone undefeated team, Jan. 11 at 7 p.m.