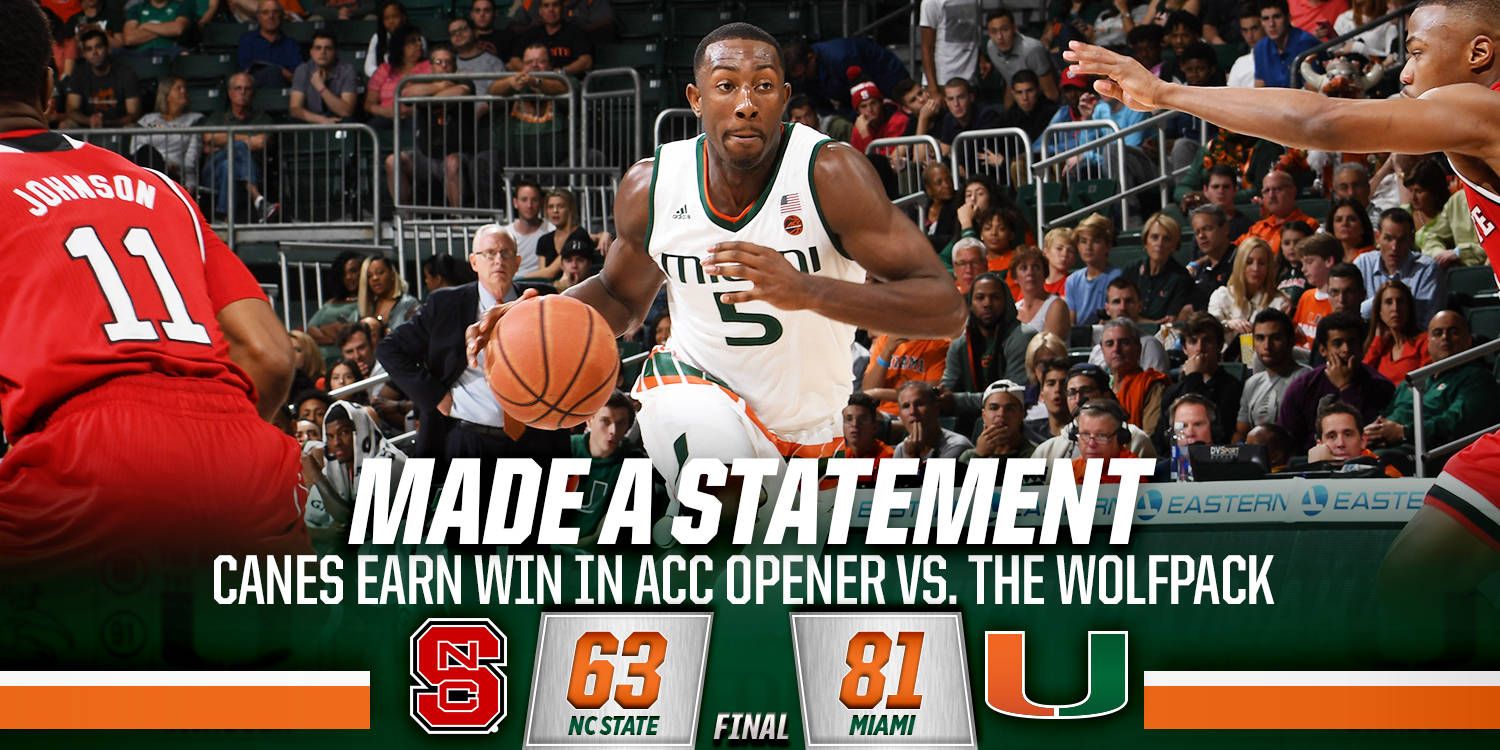 Canes Down Wolfpack 81-63 in ACC Opener

Freshmen Bruce Brown, Dewan Huell, Rodney Miller and DJ Vasiljevic each played in the first ACC games of their careers.

Senior guard Davon Reed scored 12 first-half points and ended the night with 20 points. He has now recorded three career 20-point games, with 21 against both FAU (12-16-16) and Virginia (2-22-16). He has scored in double digits 11 times this season, including nine straight games.

Reed knocked down a 3-pointer a 18:52 in the first half to score Miami’s first points of the ACC slate. He finished the night with three  makes from downtown, now hitting 173-pointers in the past five outings. He has hit multiple shots from long range in nine games this season and has hit a three in every contest.

Freshman guard Bruce Brown pulled down eight boards and now has grabbed at least four rebounds in each of the first 13 games, has eight-or-more in six outings and pulled down double-digit boards in two contests.

With 11 points and 10 rebounds, senior forward Kamari Murphy recorded the fourth double-double of his career, his third as a Hurricane and second of the season. He has now recorded double-digit rebounds five times this season, all within in the last nine games, and logged double-digit points three times.

“Well that was an outstanding performance, defensively, from us, from start to finish. We have great respect for NC State’s ability to put a ton of points on the board. Dennis Smith is truly one of the great players in the country. Forget that he is just a freshman, he is one of the best point guards. Torin Dorn and Terry Henderson are major double figure scorers. So you really have to defend them well. We have had trouble in the past defending their big people. So from start to finish I thought we were really focused on the defensive end of the floor. I thought my staff did a great job of preparing them. Chris Caputo who is our associate head coach and our defensive coordinator, he talked a lot to the scout team coordinator, who is Adam Fisher. And along with Jamal Brunt, who organizes our offense. The three of them came up with a great game plan and the players were very focused on executing it. But as Davon [Reed] said, ‘It is only one. A Very important one, you like to get off to a good start but it is only one of 18.’ So we are going to have to put this one quickly behind us and get ready for the next one.”

On what the team did especially well defensively…

“Well, they’re really great in the open court and scoring off of the turnovers. And the last timeout we had 20 something turnovers. And tonight we only had eight. We took care of the basketball, we did not make a lot of miscues that led to their fast break layups and dunks. We also distributed the ball. Our three starting guards – Ja’Quan [Newton], Bruce [Brown] and Davon [Reed] – were able to get scoring opportunities because our big guys were so active. Setting screens, bringing their men away from the basket and I thought one of the key matchups was Anthony Lawerence Jr. coming in off the bench and giving us a nice lift in the first half. And of course Kamari Murphy having a double-double, 11 points and 10 rebounds. It has got to be a team effort, and it will be a challenge every night to play against these players. Because as talented as these guys are, so are 10 of the other teams in this conference. And you saw that in some of the earlier games today when Virginia Tech scored 89 and then you see Georgia Tech was able to defeat North Carolina. And Florida State earned a road win, Clemson won on the road at Wake. Those are really impressive victories.”

On what he saw out of junior guard Ja’Quan Newton…

“Well I think he has been. He is our leading scorer; he leads us in assists. His challenge is to distribute the ball and get everybody else involved. And today I really thought he did a good job of that. Early in the offense we were getting Davon Reed shots, Anthony Lawerence Jr. shots. The whole thing about offense is good balance. We did not make as many threes as we would have liked, but we were really good in the paint. Really good at driving the ball and finishing.”

“Like he has handled the whole season. He is really special. He just enjoys himself. He wants to compete every night. I thought in the first half his energy level was so high, that he was going to have a hard time calming down and making a shot. But the second half he seemed to be very poised.“

“They defended really well. I thought they actually outplayed us in just about every aspect of the game today. Offensively, we’ve got to learn to have more poise and execute what we’re trying to run better. Certainly, you have to give those guys credit. I thought they came out with a plan to not let Dennis (Smith, Jr.) get into the paint very much. What we’ve got to learn how to do is execute our offense against good defensive teams and defend better against good offensive teams, we are not there yet and we have to learn quickly – in this league. They outplayed us in every aspect of the game today.”

On the play of Ja’Quan Newton…

“I thought he was great. He played well. He scored the ball, he got to the paint and really – not just Newton – I thought that (Davon) Reed and (Bruce) Brown, those three guys, they got into the paint all day long and that was something we talked about – to try and keep them out of the paint and we didn’t do a good job of that. They beat us off the dribble, got to the rim, so those three guys, I thought were terrific on the perimeter for Miami.”

On whether team’s are going to start coming after Dennis Smith, Jr…

“I’m sure they are – there’s no question. People are going to want to make a name (for themselves) and that’s part of being Dennis Smith – you have to learn quick and he does and he will. He knows that he’s going to get everyone’s best shot – like today – Ja’Quan played great.”