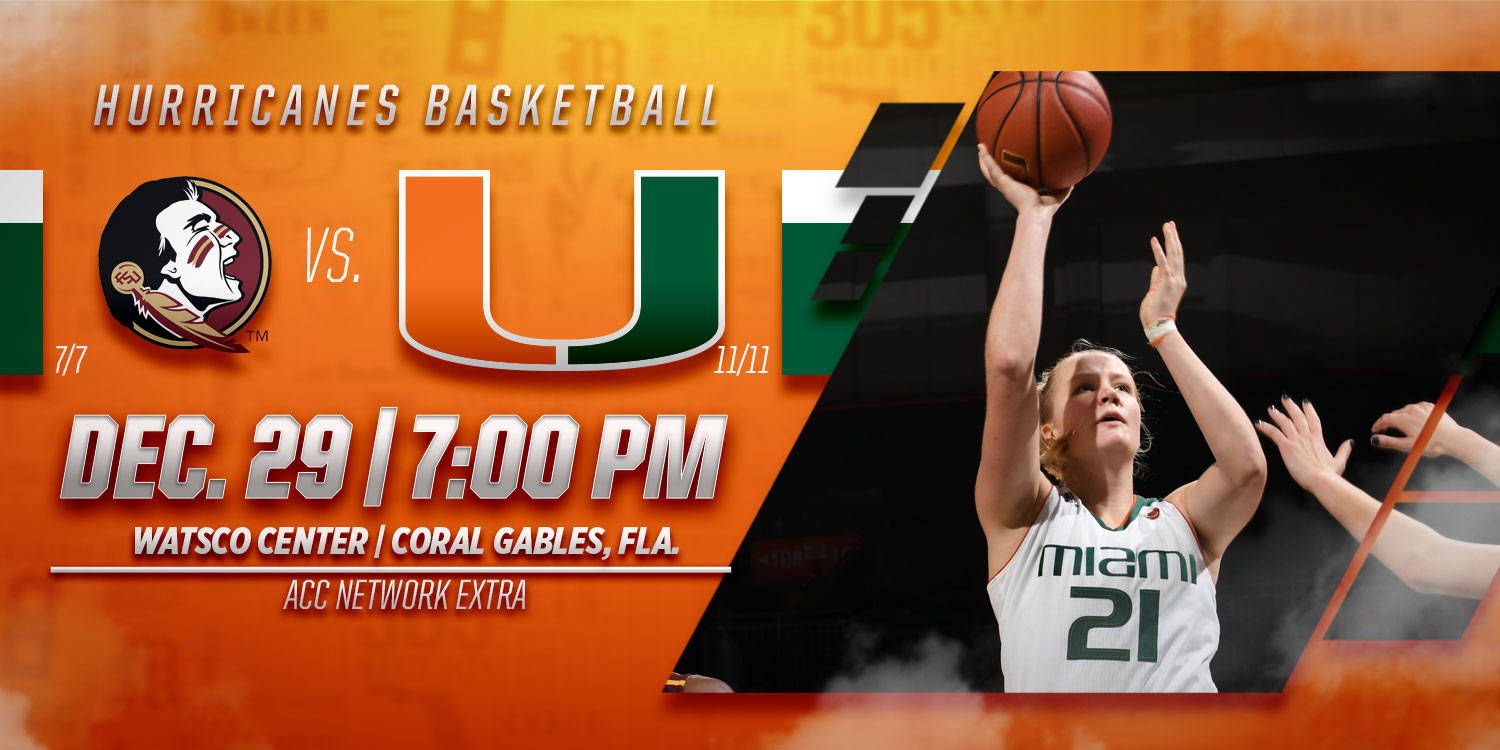 CORAL GABLES, Fla. – The University of Miami women’s basketball team will begin conference action Thursday at 7 p.m., with a top-15 matchup against seventh-ranked Florida State at the Watsco Center.

No. 11/11 Miami (11-1) and Florida State will be meeting with both teams ranked for the fourth consecutive time and with at least one ranked for the sixth time in a row.

The Hurricanes are 13-39 all-time against the Seminoles, with the two sides facing off at least twice a year since 2005 after not playing at all from 1993-2004. In the most recent matchup, which came in last season’s ACC Tournament quarterfinals, Miami registered a 74-56 victory on March 4, 2016.

Miami is riding an 11-game winning streak and wrapped up non-conference play with just one defeat for the second year in a row. The Hurricanes topped Coppin State, 75-35, and Maine, 76-51, to win the Miami Holiday Tournament before an eight-break in advance of ACC competition.

Against Maine, senior guard Adrienne Motley scored a game-high 21 points on 8-of-9 shooting, while junior forward/center Erykah Davenport notched a double-double with 11 points and 10 rebounds. In addition, senior guard Jessica Thomas scored 12 points to reach 1,000 in her career, and finished with seven assists and zero turnovers.

Florida State (12-1) has four players averaging double figures in the scoring column, with senior guard Leticia Romero’s 14.3 points per game leading the way. The Seminoles, who went 25-8 (13-3 ACC) in 2015-16 and advanced to a second straight Sweet 16, were tabbed third in the preseason ACC poll this year.

Miami and Florida State are a combined 23-2 on the season and each team has won its last 11 contests.

The meeting between the Hurricanes and Seminoles will be broadcast live on ACC Network Extra HERE, as well as carried live on WVUM 90.5 FM HERE. Live stats for the game can be found HERE.

Prior to the game, Thomas will be honored on the court for recording 1,000 points. Additionally, fans who purchased the “Hanukkah with the Hurricanes” package will receive a shirt with “Hurricanes” written in Hebrew on it. Team posters and schedule cards will be available at the marketing table by the main entrance.

Following its matchup with the Seminoles, Miami will have its first ACC road game when it plays at Pittsburgh Jan. 2 at 7 p.m.