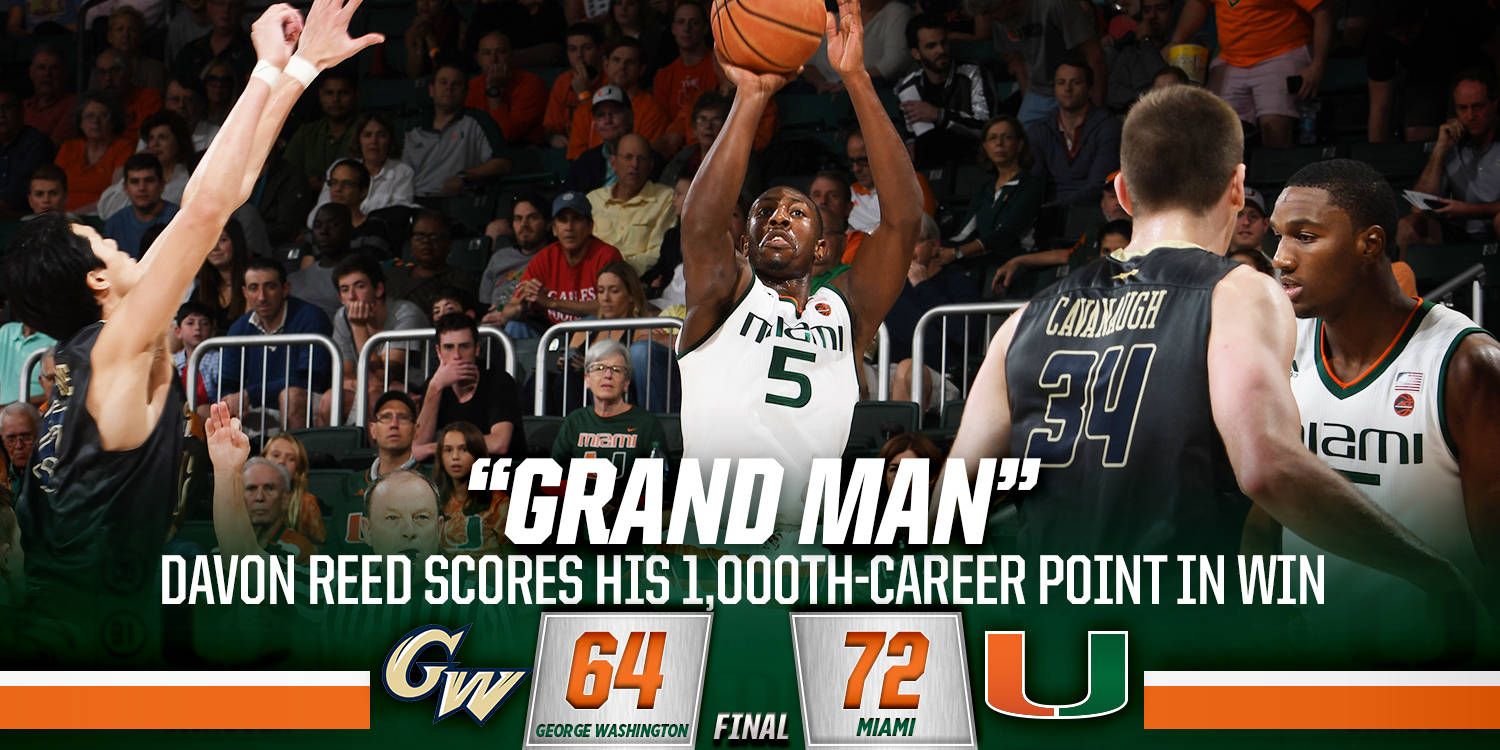 JaQuan Newton finished with 14 points and Bruce Brown had 14 points and 12 rebounds for the Hurricanes (9-2). Ebuka Izundu added 12 points.

Both teams enjoyed huge first half runs. Davon Reed keyed a 23-4 spurt with three 3-pointers that gave Miami a 28-8 lead with 8:45 remaining.

The Colonials responded with a 22-6 run in the next 7:29. Yuta Watanabe scored 11 points, including three 3-pointers and his third conversion from behind the arc with 1:16 left got George Washington within 34-30.

Miami: Reed became the 37th player in Hurricanes history to reach 1,000 points after his dunk with 5:45 remaining in the second half.

In his 109th game at The U, senior guard Davon Reed scored 17 points against George Washington, solidifying his name in the Hurricanes’ 1,000-point club. He is the 37th Hurricane to score 1,000 points.

Reed led Miami in scoring with 17 points and three steals, while Bruce Brown had a team-high 12 rebounds.

Brown recorded his second double-double of his career, two games removed from becoming only the second player in program history to record a triple-double against South Carolina State. The native of Boston finished the evening with 14 points and a career high 12 rebounds.

Four Miami players scored in double figures for the Canes, as Reed had 17, Newton 14, Brown 14 and Ebuka Izundu had 12. Every Hurricane to earn time on the court scored at least two points.

Brown has grabbed at least four rebounds in each of the first 10 games, and has eight-or-more in five outings. He has at least two assists in eight contests this season.

Junior point guard Ja’Quan Newton tallied five assists against the Colonials, his fourth-straight game with five or more handouts, and fifth on the season. He also finished the night with 14 points and has scored 11-plus points in every game but one (FAU).

Sophomore center Ebuka Izundu finished the game with 12 points, four rebounds and block. This was Izundu’s second game this season with double digit scoring and the third of his career. The native of Charlotte, N.C., has now recorded a block in seven games this season.

Sophomore guard Anthony Lawrence, Jr., finished the game with two points, two rebounds, an assist, a block and a steal against the Colonials. He now has at least one steal each game but two.

Knocking down a pair of 3-pointers, DJ Vasiljevic finished the night with six points and a career-high three rebounds.

The Hurricanes turned the ball over a season-low six times, while forcing 12 on the defensive side of the ball. This is the first game Miami has tallied less than 10 turnovers.

With the win, Miami earned its first ever win against GWU, improving to 1-3 overall and 1-0 at home. UM is 1-1 against the Colonials under Coach L and Larrañaga improves to 2-4 in his career against GWU.

Coach Larrañaga is just three wins shy of 600 career victories. With 600 wins, he will be one of five ACC coaches with 600 victories, and the other four men are in the Basketball Hall of Fame.

“I told the team coming into the game that George Washington has size. They have shooting ability. They have post-up ability. They offensive rebound extremely well, and the five guys who started for them tonight, I believe, as a starting unit were 5-0 coming into the game, so they were playing with a great deal of confidence. I thought we played sensational for the first 13 minutes. We were terrific on the defensive end of the floor, we were sharing the ball on offense, making shots, making threes. Then there was a slight let-up, and it was just enough. [Yuta] Watanabe, who has missed seven straight games, comes back – he’s very fresh, probably very excited about getting back on the court. We’ve seen that before where a guy comes out and he is just on fire initially. In the second half, kind of the same thing. They outscored us, I believe, 12-2 to start the second half. We called a timeout, then we kind of righted the ship and it kind of see-sawed back and forth for a while. I thought we played very smart and very well down the stretch.”

On the importance of gutting out wins against quality opponents with ACC play looming..

“I thought it was like an ACC game. It was very physical inside. I think they’re the first team to outrebound us in a while. It was 35-34, so kind of an even battle there. Bruce Brown had 14 points and 12 rebounds. Ebuka [Izundu] came in off the bench and went 4-for-6 from the field, 4-for-5 from the foul line. He had 12 points. we need that. We only had six turnovers, which is something we’ve been really stressing. Ja’Quan Newton with five assists and only two turnovers – again, more of a point of emphasis. The guys did a good job of executing, especially down the stretch.”

“What was happening early on [in the season] is there’s somewhat of a pressure on upperclassmen to deliver right away, because the freshmen are learning. I think he put a little bit too much pressure on himself and he tried too hard. What we talked about with the team was that’s why we’re turning the ball over – we’re trying too many difficult plays, lob passes that are not there, getting into the lane and trying to make a tough pass instead of an easy pass. We’ve worked on it in practice, worked on it in practice, and we told Davon to quit looking for so many shots off the dribble or ball screens, and start looking for shots off the catch. He missed one that was a beauty. We ran a play and got him in the flare screen, he got right to the corner late in the game and he was wide open. He just missed it little short. Those are the kinds of shots [where] he’s a very high-level shooter in those situations. To score 1,000 points put him in a 1,000-point club. A lot of guys who play college basketball never score 1,000 points, so I’m very, very proud of him for that.”

“We woke up. We’ve been in this position before. I knew we were going to fight back. We’ve been down 16 [points] and took over leads, we’ve been down over 20 at some point, other than tonight, and taken the lead. We have a resilient group, and I knew we were going to come back. I also knew that it was going to take a lot of energy and effort. We’ve seen what that does to our team and how much energy it takes to get back, expending all of that and then losing gas down the stretch to finish the job. That’s kind of what happened tonight. I thought we had opportunities to make some shots down the stretch that didn’t go down for us. We had some shaky offensive possessions, and took some questionable shots, and that’s on me. Not the guys. That’s 100 percent on me. I have to do a better job of orchestrating our stuff down the stretch. But we had our opportunities. We dug ourselves in a hole early and we fought back. I’m proud of our guys. We just didn’t have enough down the stretch to finish the job.”

“I shouldn’t say surprised me, but Yuta [Watanabe], being his first game in seven games…he willed us back. His shot-making ability, his defense, he blocked a couple shots today. That surprised me because I didn’t know how much I was going to be able to Yuta today, given that it was his first game back. But he told me he was feeling great. I trusted him and I told him before the game, ‘You let me know. I’m going to play you as much as how you feel.’  He told me he was feeling good, so we rolled with him. That kind of surprised me – how much energy he had, how effective he was scoring the ball and making shots, blocking shots, and how good he was defensively given the fact that he hadn’t played in seven games. He’s a little out of shape, getting his rhythm and timing back. That was a really positive spot for us tonight.”

On Yuta Watanabe’s return and the injury…

“He had a calf injury that kept him out the last seven games.”

On the importance of in-game adjustments with ACC play looming…

“I’ve been on a lot of different Miami teams since I’ve been here. This is probably the youngest team I’ve been on since my freshman year. To have that poise and to be able to adjust that quickly, in a matter of seconds, was big-time. That showed a lot of poise and a lot of maturity in our team, and I was very impressed with that.”

On the beginning of the second half, where George Washington continued to play well…

“That’s what happens when a team gets confident – they feel like they can throw a rock in the ocean. They were able to do that, got a couple more shots early in the second half. Like I said, we continued to adjust and continued to make it a priority to stop them, and we were able to at certain points in the game.”

On Yuta Watanabe, who returned from injury and led all George Washington scorers with 15 points…

“They said that he would be coming back this game, most likely, and he made some big-time shots. I tried to make it a priority to not let him get any more easy ones.”

On recording his 1,000th career point as a Miami Hurricane…

“It’s an honor. I got to give all the credit to Coach L. Being able to play for a coach that encourages you and allows you to play within a system but with so much freedom, and grow as a player, is really a compliment to him. I’m blessed and thankful to be able to have scored 1,000 points.”