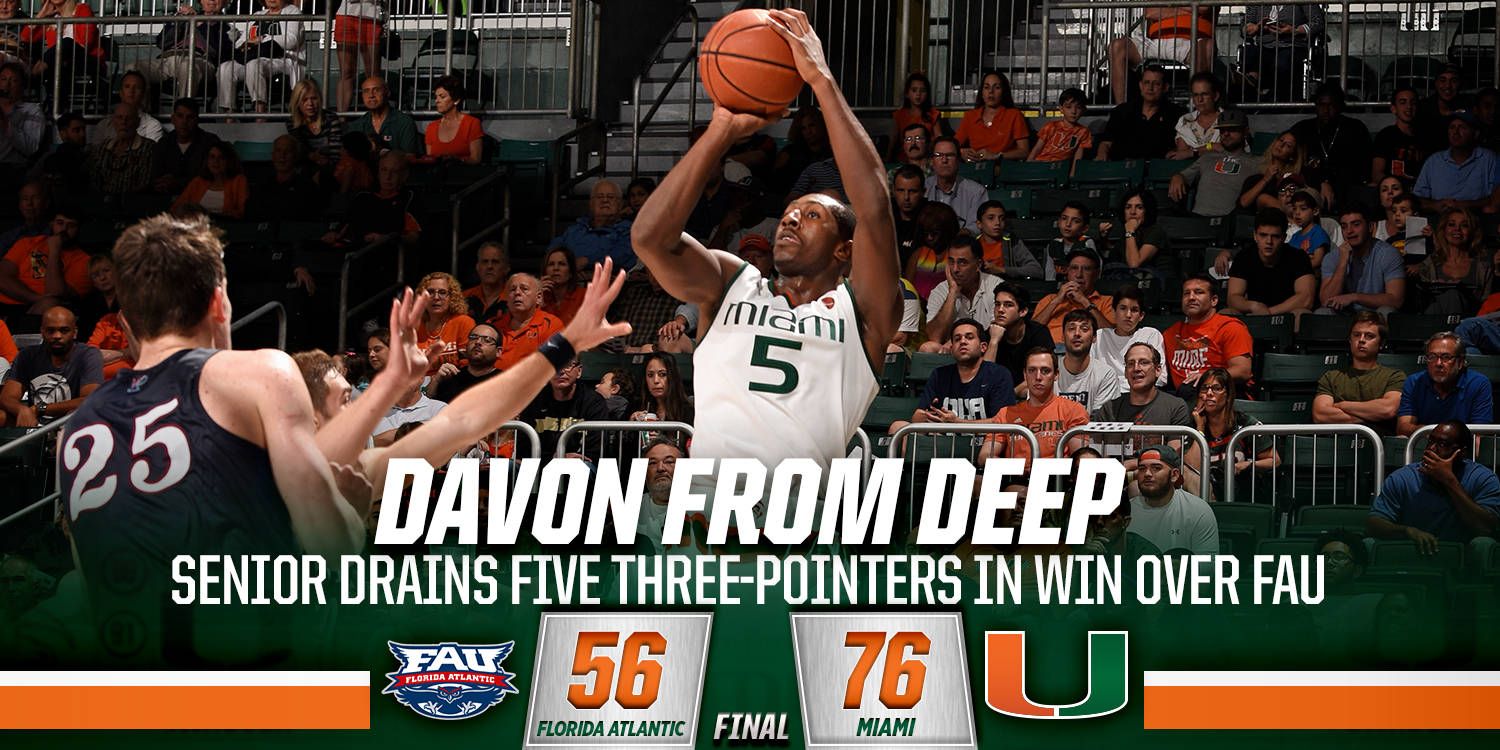 CORAL GABLES, Fla. (AP) – Davon Reed scored 21 points on 6-of-10 shooting and tied his career high by making 5 of 9 3-pointers to lead Miami to a 76-56 victory over Florida Atlantic on Friday night.

Miami (8-2) took the lead for good after a 12-2 run during a 4:36 stretch midway through the first half. Anthony Lawrence keyed the surge with two 3-pointers. Lawrence’s second 3 with 8:05 remaining capped the spurt and increased the Hurricanes’ lead to 20-12.

Bruce Brown’s layup with 1:03 to go gave Miami its largest advantage of the first half at 39-22.

Miami: Kamari Murphy finished with 10 rebounds despite missing 11 minutes in the first half because of foul trouble. Murphy has double-figure rebounds in four of his last six games.

Florida Atlantic: The Owls scored a season-low 24 points in the first half. Florida Atlantic’s previous low was 27 in its 64-63 loss against Hawaii on Nov. 14.

Miami: The Hurricanes will host George Washington on Dec. 22.

Senior guard Davon Reed led the way for the Hurricanes tying career-highs in both 3-pointers made and points scored, knocking down five shots from beyond the arc and scoring 21 points. This marks his sixth game with multiple treys, and second-straight with three or more from downtown. With his 21 points, Reed has scored in double digits eight games this season, and only second career 20-point game.

Freshman guard Bruce Brown was two rebounds away from a double-double, after posting a triple-double in his last outing, against SC State. He pulled down eight rebounds and has now grabbed at least four rebounds in each of the first 10 games, and has six-or-more in eight outings. He also tallied six assists and two steals against FAU, now posting at least five assists in three contests, and has a steal in eight of the last nine games.

Junior point guard Ja’Quan Newton tallied 6 assists against the Owls, his third-straight game with five or more handouts, and fourth on the season. He also grabbed six rebounds, tying his previous season-high of against Rutgers.

Sophomore guard Anthony Lawrence, Jr., scored in double digits for the third time this season, recording 12 points. He was a perfect 3-of-3 from long range against the Owls. He also swiped one steal, and now has at least one steal in every game but two, and had three-or-more in a trio of outings.

Three Miami players grabbed at least eight rebounds for the Canes, as Murphy and Huell each had 10 rebounds, while Brown recorded eight.

With the 20-point victory, Miami has now won four games by at least 20 points, including +49 vs. Western Carolina, +38 at North Florida and +36 vs. South Carolina State.

Miami swiped seven steals, and now the Canes have at least seven steals in all but two outings.

Miami opened the season hitting better than 45.0 percent from the field in four straight games, and has done so in eight of ten outings.

With the win, Miami improves to 22-1 overall against FAU, with a 14-0 mark at home. UM is 2-0 against the Owls under Coach L and Larrañaga improves to 3-0 in his career against FAU.

Coach Larrañaga is just four wins shy of 600 career victories. With 600 wins, he will be one of five ACC coaches with 600 victories, and the other four men are in the Basketball Hall of Fame.