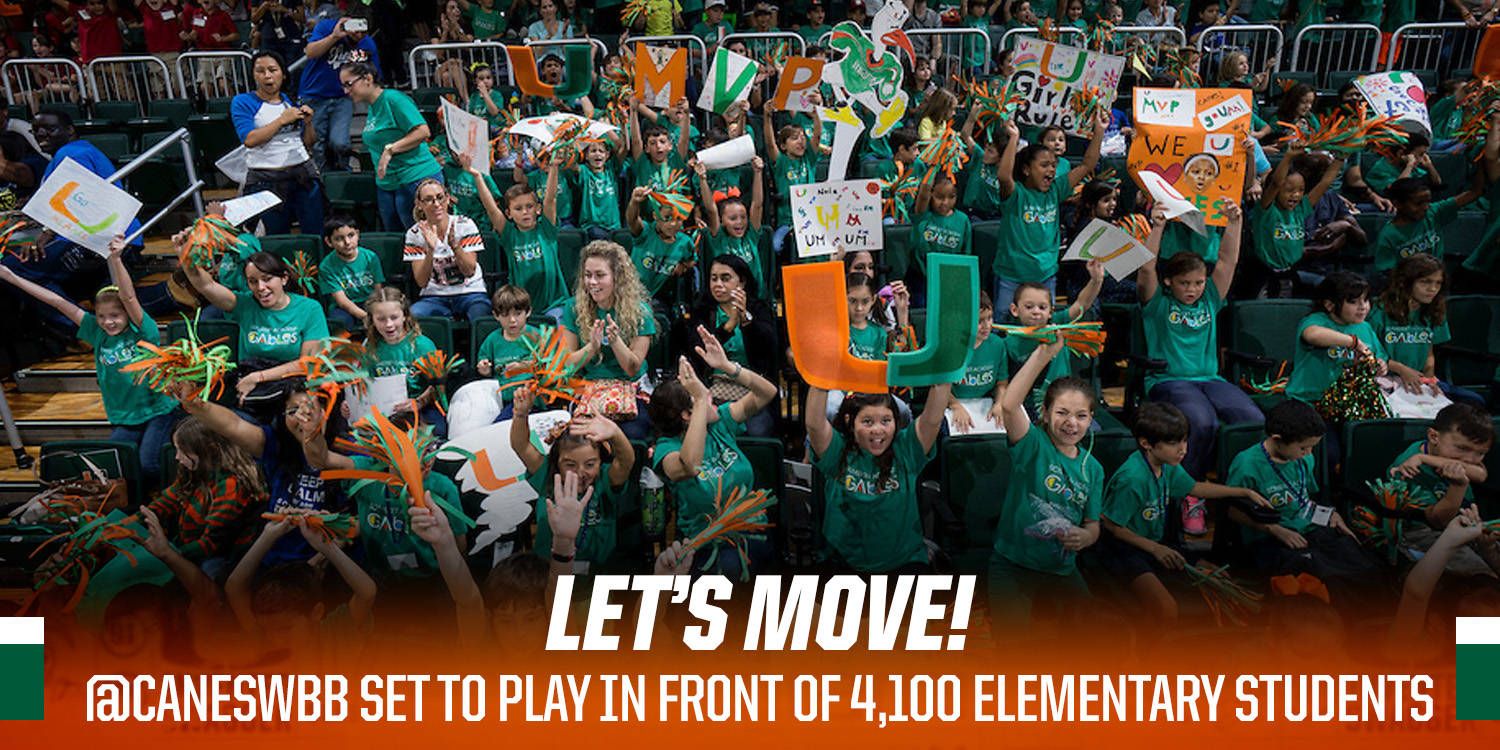 CORAL GABLES, Fla. – The University of Miami women’s basketball team will face Loyola Chicago Tuesday at 11 a.m., at the Watsco Center for the return of Let’s Move! Field Trip Game.

This is the third annual Elementary School Field Trip Game, with 4,100 elementary school children from 41 schools, 40 of which are Miami-Dade County schools, attending the game.

“The Let’s Move! Field Trip Game is a special partnership between the University of Miami and the Miami-Dade County public schools to engage youth in recreation and sport to promote health and wellness for our community,” Deputy Director of Athletics / SWA Jennifer Strawley said.  “Through the tremendous work of our department’s marketing staff and the efforts of the Miami-Dade public schools, we have seen exponential growth in this fantastic event that benefits the children in our community and provides a fantastic environment for our women’s basketball program.”

The Hurricanes Elementary School Field Trip Game was initially created to offer both children in the community and student-athletes a fun experience outside of the classroom. The first event was held November 2014 in front of a crowd of 1,762.

After the success of the first event it was decided to integrate a health and wellness theme to increase the impact of the field trip game for teachers and students.

The second Field Trip Game was held in November 2015 in front of 3,504 local elementary school students and faculty, an increase of just under 50 percent.

The Let’s Move! program was launched in 2010 with the all-encompassing theme of America’s move to raise a healthier generation of kids.

“Miami-Dade County Public Schools, Office of Physical Education and Health Literacy, is honored to partner with the University of Miami Athletics Department in the promotion of programs to keep youth engaged in a variety of physical activities while promoting the importance and benefits of sports participation,” Dr. Greenberg said.

The 2016 Let’s Move! Event will feature campus speakers such as the WalkSafe program, the THINK (Translational Health in Nutrition and Kinesiology) program and former Hurricanes stand-out student athlete and current Director of Player Development for the Miami football team, Joel Rodriguez.

The Hurricanes plan to continue raising awareness of the Let’s Move! program through the new Let’s Move! Champion of the Game award. Four physical education/health literacy teachers will be recognized individually during ACC play.