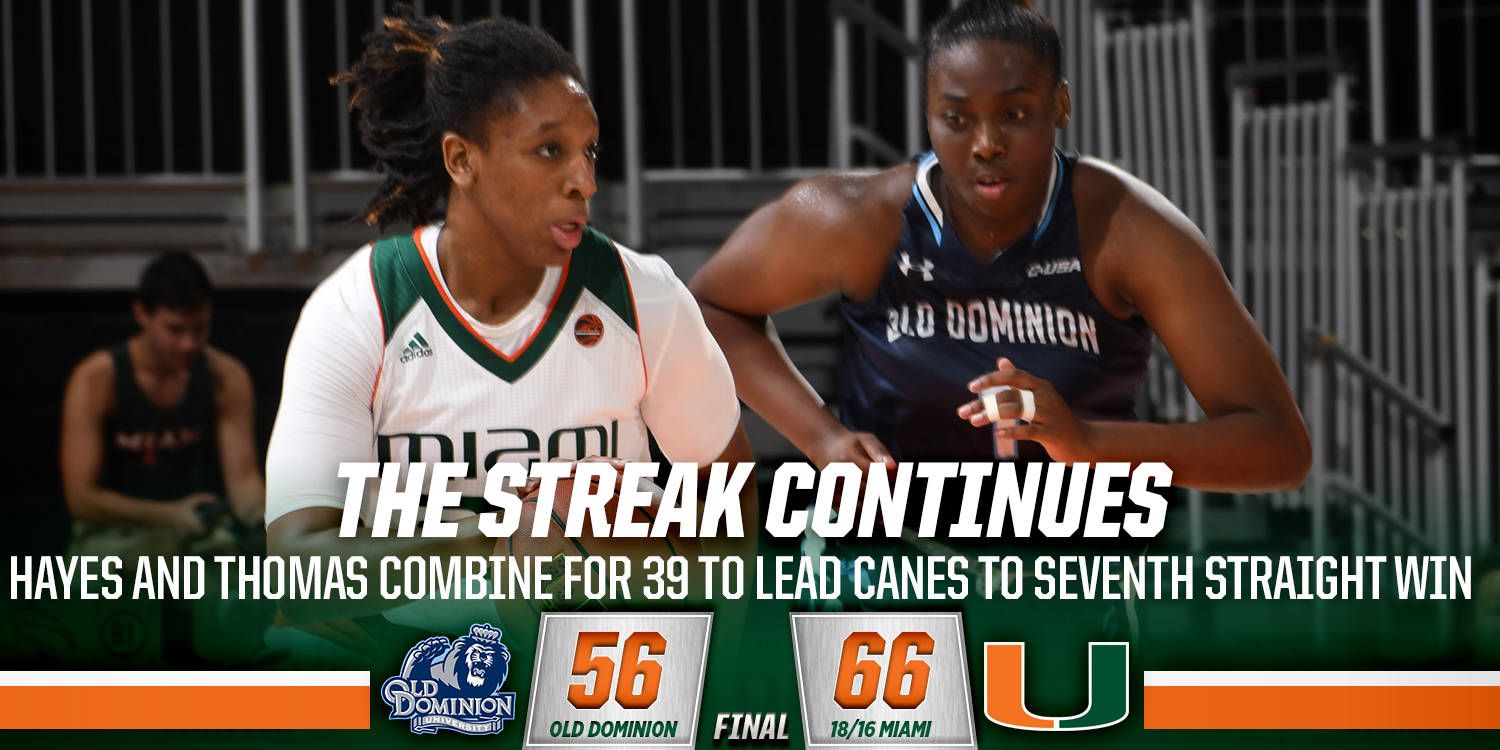 “They’re strong; they are two of our strongest kids, pound for pound,” Miami head coach Katie Meier said of Thomas and Hayes. “Keyona is just one of the strongest players and JT is just very strong for her size. Their strength just really elevated their games. It took a while to understand that you just had to collect a little bit more.”

The Hurricanes jumped out to a 10-0 lead in the first two minutes and 23 seconds, with redshirt senior forward Keyona Hayes scoring the first six points on old-fashioned three-point plays. The Lady Monarchs responded with eight straight points and Miami’s advantage would sit at four, 16-12, after one period.

Old Dominion (3-3) outscored the Hurricanes, 13-7, in a low-scoring second session and went into the locker room with a 25-23 edge behind 10 points from redshirt senior guard Jennie Simms, the nation’s second-leading scorer.

Miami scored the first seven points of the third period, matching its total from the entire second quarter, in the first two minutes and 19 seconds after the break to take a 30-25 lead. The Hurricanes would eventually take a 43-40 advantage into the final frame.

Thomas connected on a pair of 3-pointers and made an outstanding pass to Hayes for a three-point play, helping Miami open the fourth period on a 9-2 run and take a 52-42 lead with 7:24 to go.

That charge propelled the Hurricanes to ultimately earn the 66-56 win over the Lady Monarchs. Additionally, those shots from long range helped Thomas tie Shenise Johnson (2008-12) for fifth place on Miami’s career 3-pointers made list with 148.

Junior forward/center Erykah Davenport extended her career-long streak by scoring eight-plus points for the eighth straight game to open the season. The Decatur, Ga., native also notched a career-high-tying five steals, the most by any Hurricane so far this season.

Simms led all scorers with 24 points, while senior forward Destinee Young posted a double-double with 12 points and 13 rebounds for Old Dominion.

“We played hard defensively,” Meier said. “Their post players are big and can shoot. And then you have Simms, who you have to give a ton of attention to. Their 15-foot shots from the post really challenge your defense, they really do.”

Prior to a nine-day break for final exams, the Hurricanes will be back in action Tuesday at 11 a.m., at the Watsco Center.

·         Miami held Old Dominion without a field goal for a span of four minutes and 40 seconds during the third period.

·         Senior guard Adrienne Motley is now 10-2in her career against schools from her home state of Virginia.

·         Thomas has scored 10-plus points in all eight of Miami’s games this season, continuing the longest double-digit scoring streak of her career (prior high of five in her first three seasons).

·         Sophomore forward/center Emese Hof moved past 200 rebounds as a Hurricane, Davenport eclipsed 400 points and reached 50 blocks at Miami and Thomas surpassed 950 points in her career.