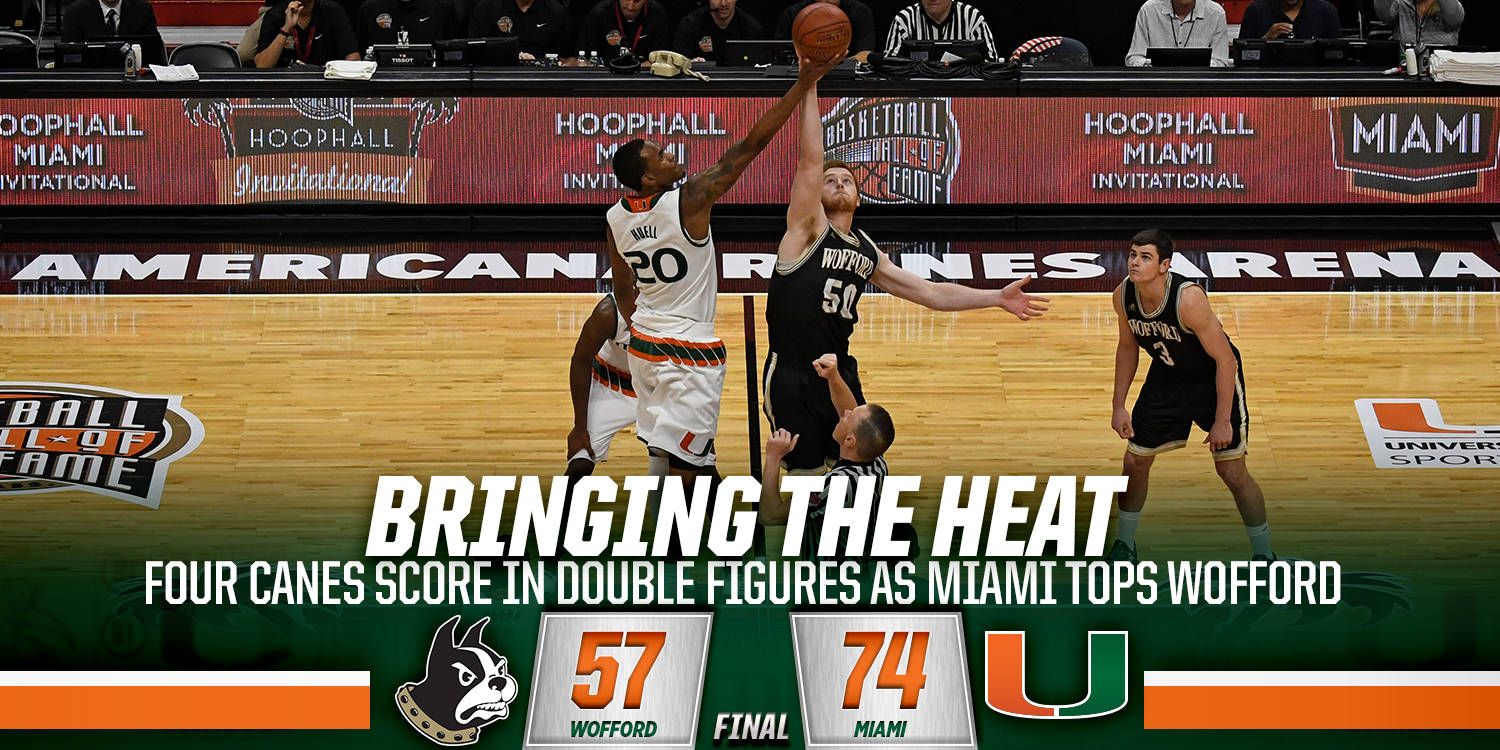 MIAMI – (AP) Miami led all the way in a 74-56 victory on Saturday at AmericanAirlines Arena in Miami.

Freshman guards DJ Vasiljevic and Bruce Brown hit back-to-back 3-pointers to give the Hurricanes their first field goals of the second half and a 48-34 cushion.

Except for one brief moment when it was 52-43 the game remained in double digits the rest of the way. Miami’s biggest lead was 18 points on two occasions in the final four minutes.

Sophomore forward Cameron Jackson scored 16 points to lead Wofford. Guard Fletcher Magee with 11 points was the only other Terriers player in double figures.

Miami senior forward Kamari Murphy had 14 points and 10 rebounds for his first double-double of the season and third of his career. Newton added a career-high nine assists. Brown finished with 12 points and guard Davon Reed with 11.

The game was the nightcap of a doubleheader in the second annual Hoophall Invitational sponsored by the Naismith Memorial Basketball Hall of Fame. Illinois beat VCU 64-46 in the opener.

Postgame Notes
· Starters: G Ja’Quan Newton, G Bruce Brown, G Davon Reed, F Kamari Murphy, F Dewan Huell
· Following the game, senior forward Kamari Murphy was recognized as the Hoophall Invitational Most Valuable Player.
· Murphy led the way for the Hurricanes with 10 rebounds, to go along with 14 points earning his third career double-double and his first since the opening round of last season’s NCAA Tournament matchup against Buffalo (11 points, 13 rebounds).
· As a team the Hurricanes shot 50 percent (24-48) from the field, 46.7 percent (7-15) from beyond the arc and 90.5 percent (19-21) from the line. On the defensive side of the court Miami held the Terriers to shoot 21-58 (36.2%) and 5-23 (21.7%) from 3-point range.
· Junior guard Ja’Quan Newton led the way for the Hurricanes with a team-high 15 points and nine assists, the latter setting a career high.
· In the opening half, the Hurricanes shot 57.7 percent (15-26) from the field, while shooting 3-6 (50%) from beyond the arc. On the defensive side of the court, Miami blocked five shots and forced the Terriers to shoot 32.3 percent (10-31) from the field and 15.4 percent (2-13) from beyond the arc.
· In only seven first half minutes, sophomore center Ebuka Izundu scored seven points and pulled down three boards.
· Reed finished the afternoon with his sixth double-digit game of the season, scoring 13 points, while pulling down five rebounds, dishing out four assists and recording a season-high three steals.
· In the opening 3:14 of the second half, the Terriers went on a 9-0 run to pull within three points of Miami (36-33). Miami went on to make six consecutive free throws before freshmen DJ Vasiljevic and Bruce Brown hit back-to-back threes at the 12:41 and 11:58 minute marks. The latter placed the Hurricanes on a 12-1 run, taking a 48-34 lead.
· Brown finished the game with 12 points and three steals, shooting a perfect 4-4 from the line and 75 percent (3-4) from the field.
· With the win Miami improves to 3-0 in the all-time series against Wofford and to 3-2 at AmericanAirlines Arena.