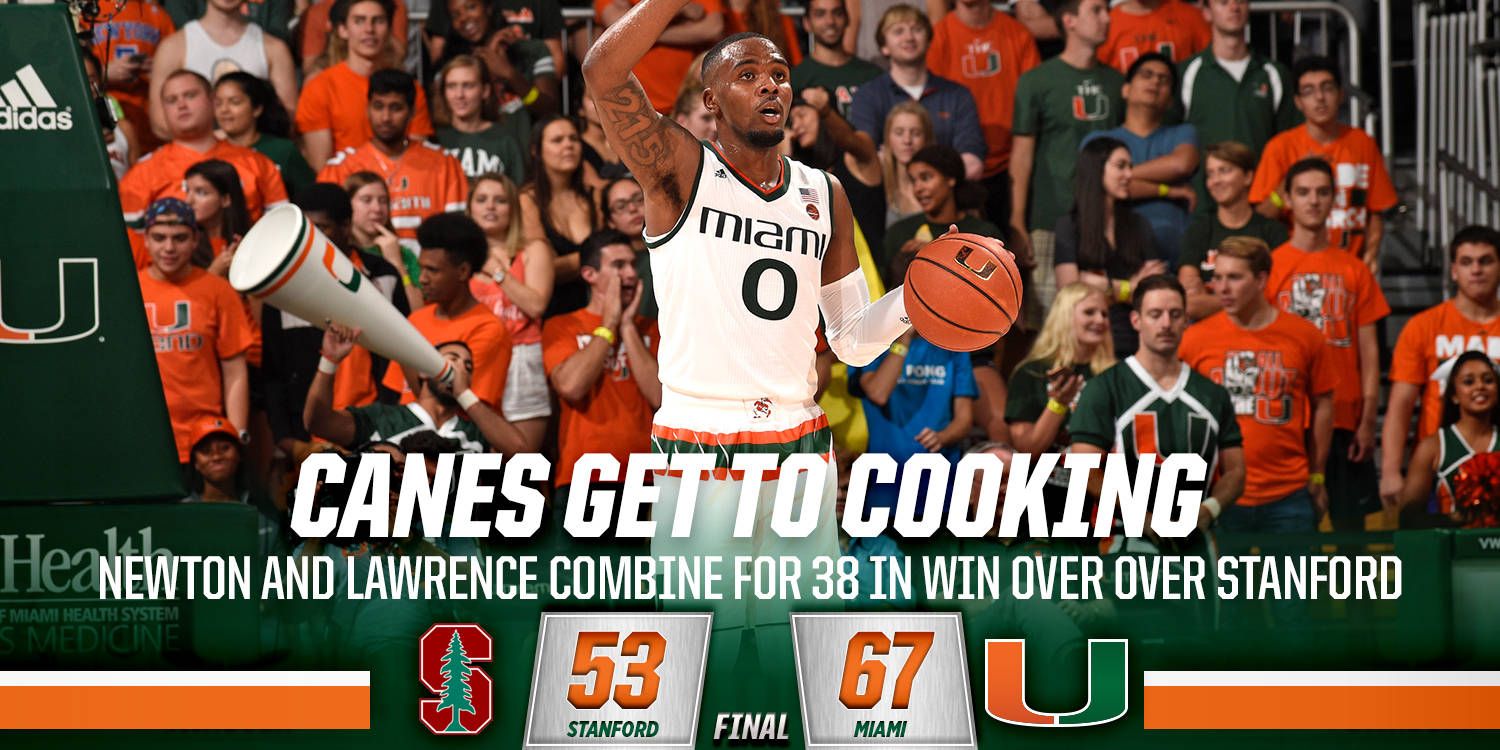 LAKE BUENA VISTA, Fla. – In the first half, junior Ja’Quan Newton kept the Hurricanes in it. In the second half, junior Anthony Lawrence helped them pull away.

Miami overcame a challenging first 20 minutes to capture their AdvoCare Invitational opener against Stanford, 67-53, Thursday at the HP Field House on the ESPN Wide World of Sports Complex.

Looking to repeat the magic from last season’s Puerto Rico Tip-Off championship, the Hurricanes advance to play No. 24 Iowa State in the semifinals Friday at 11 a.m.

12 of Newton’s 20 came in the first half, while all 18 of Lawrence’s points came in the second. The two players combined for over half of Miami’s points, with both Newton and Lawrence tying a career high in the victory.

A smothering Hurricanes defense held the Cardinal without a field for the game’s final 6:15. After a slow first half, Miami shot over 62 percent from the field and outscored Stanford 44-26 in the second half to remain unbeaten on the season.

Senior Kamari Murphy added six points and seven rebounds, while freshman Bruce Brown finished with 10 points, including nine in the second half.

Lawrence shot 6-for-8 from the field in the final 20 minutes.

“I think they were just giving me the ball in the right moments,” Lawrence said. “My teammates were penetrating, kicking it to me. Once I hit the first one, I felt like I was on fire.”

Miami (4-0) opened up a six-point lead, its biggest of the game up to that point, on a turnaround baseline jumper from Newton with 3:21 remaining to make it 58-52. Lawrence rebounded a miss on the ensuing Stanford trip up the floor, and Newton hit 1-of-2 free throws after being fouled on the other end to help Miami put the game away.

The Hurricanes closed the game on a 14-2 run and allowed just three field goals in the final 10 minutes.

A 6-2 run to open the second half pushed Stanford’s four-point halftime lead to eight at 33-25. But Lawrence tied the game on a free throw to cap a traditional three-point play, and senior Davon Reed gave Miami its first lead since the 14:56 mark of the first half with a three-pointer to put Miami ahead 36-35.

In a sloppy first half, the Hurricanes’ lone bright spot was Newton.

Both teams started just 3-of-10 from the field through just under five minutes, but a 9-2 Cardinal run gave Stanford a 16-9 lead through the halfway point of the first half.

Murphy chipped in four points and four rebounds early, but other than a bucket apiece from Newton and freshman Dewan Huell, the rest of the Hurricanes opened the games shooting 0-for-11.

With his team trailing 19-10, Newton reeled off 10 straight points for the Hurricanes to help tie the game at 23.

“It wasn’t frustrating at all in the first half,” Newton said. “It was more, we’ve just got to play better, play harder. We knew on the offensive end we weren’t playing as good as we’re capable of. We decided to keep it going on the defensive end. We kept doing that, and that led to our offense.”

• Ja’Quan Newton finished the game with 20 points to tie his career high and lead the team in scoring. The Philadelphia native added two rebounds, a pair of assists and a steal in 37 minutes played.

• Following three consecutive scoreless halves – zero points against Penn and zero in the first half against Stanford – Lawrence caught the hot hand, matching a career-high for points in a game with 18. His last game with 18 was vs. Notre Dame on Feb. 3, 2016.

• While recording four steals, Lawrence, the St. Petersburg, Fla., native surpassed his total amount of made three pointers on the season (2) shooting 3-5 from behind the arc, 3-3 from the free-throw line and 6-8 from the field in the second half.

• Senior Kamari Murphy led the team with both seven rebounds and two blocks.

• The Hurricanes have held their first four opponents to 88 total first-half points (22.0 ppg) through four games, and forced opponents to shoot just 30.8 percent (36-117) from the field and 20.0 percent (9-45) from three. Miami has also forced opponents to cough up the rock, averaging 9.0 forced turnovers in the first stanza.

• Following a 3-pointer by sophomore Anthony Lawrence Jr., with 16:59 remaining in the second half, Miami cut the Cardinal lead to five. Senior Davon Reed added a layup before Lawrence received a dump off pass from Newton at the basket which he laid in for the and-one to even the score at 33. This was the first time since the 5:25 (7-7) minute mark in the first half that the Miami and Stanford were tied. The run continued after a jumper by Dorian Pickens, with Reed drilling a three to give Miami its first lead since 14:56 remained in the half (7-4 Miami).

• The Hurricanes evened the all-time series with the Cardinal at 2-2.

• Following the victory the Hurricanes will face Iowa State, Saturday at 11 a.m