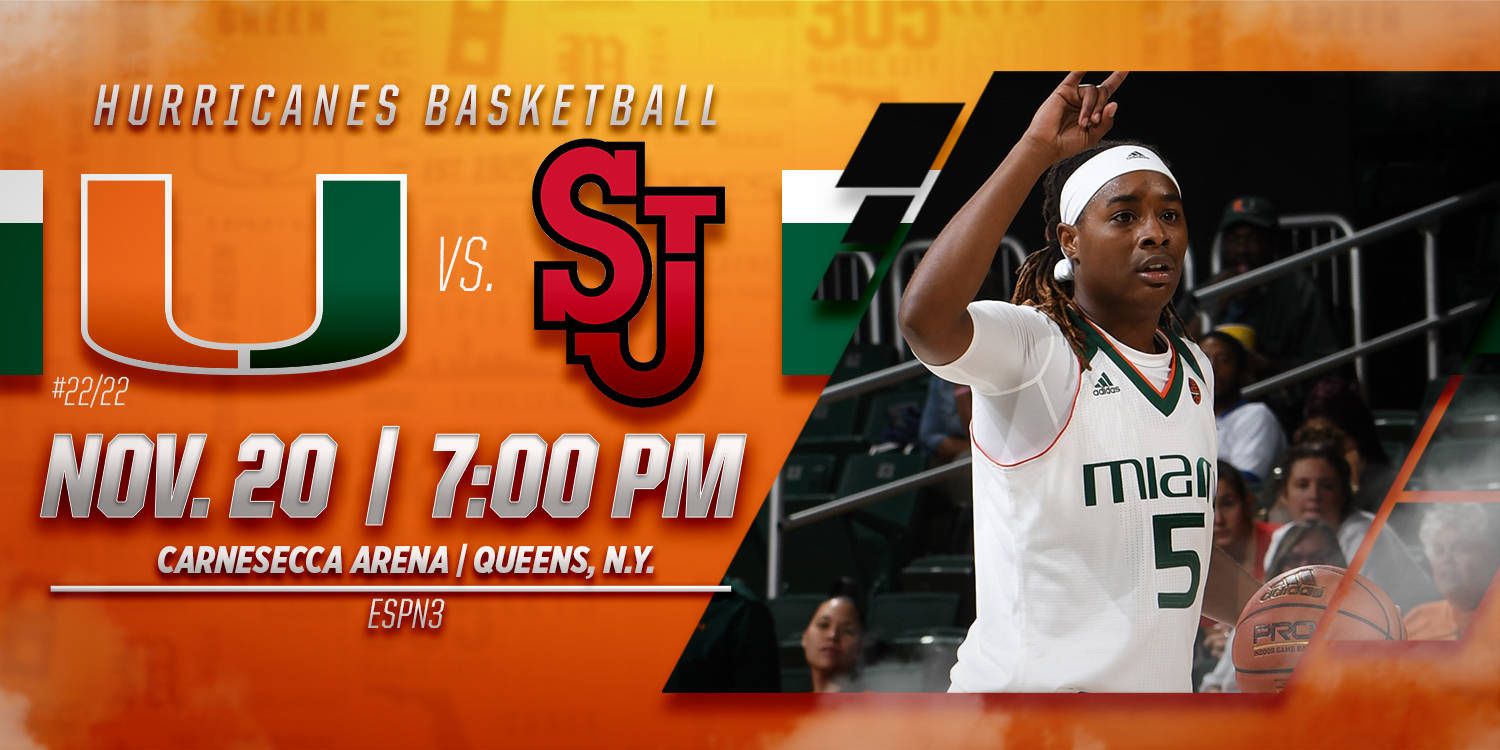 CORAL GABLES, Fla. – The University of Miami women’s basketball team will play its third game away from home in the first 10 days of the season Sunday night at St. John’s.

The Hurricanes and Red Storm, former BIG EAST rivals, will square off at 7 p.m., at Carnesecca Arena in Queens, N.Y.

No. 22/22 Miami (2-1) has an 18-6 all-time record against St. John’s (1-1), including a 10-1 mark over the last 11 meetings, with eight consecutive victories. The Hurricanes’ eight-game winning streak against the Red Storm is its second-longest against any 2016-17 opponent, trailing only its 10 straight triumphs over Virginia Tech.

In the victory over the 49ers at the Watsco Center, 12 different Hurricanes tallied points, with senior guard Jessica Thomas’ 18 leading the way. Miami jumped out to a 12-0 lead after hitting 3-pointers on each of its first four shots and finished with 10 threes in the game.

St. John’s, receiving votes in the USA TODAY Coaches Poll, has split its first two games of the season, winning at William & Mary, 73-57, in its opener and then falling to Duquesne, 71-65, at home. Senior forward Jade Walker leads the Red Storm in both scoring (17.0) and rebounding (6.0) thus far.

Picked to finish sixth in the BIG EAST this year, St. John’s is coming off a 23-10 (11-7 BE) campaign in which it won the conference tournament and earned its sixth NCAA Tournament trip in the last seven seasons.

The game between the Hurricanes and Red Storm will be televised live on ESPN3 HERE, as well carried live on WVUM 90.5 FM HERE. Live stats for the game will be available HERE.

Following their matchup at St. John’s, the Hurricanes will return to Coral Gables for the Miami Thanksgiving Tournament. Miami is set to face Grambling State in its first game Friday at 4 p.m., and will then play Fordham or Texas Tech two days later.