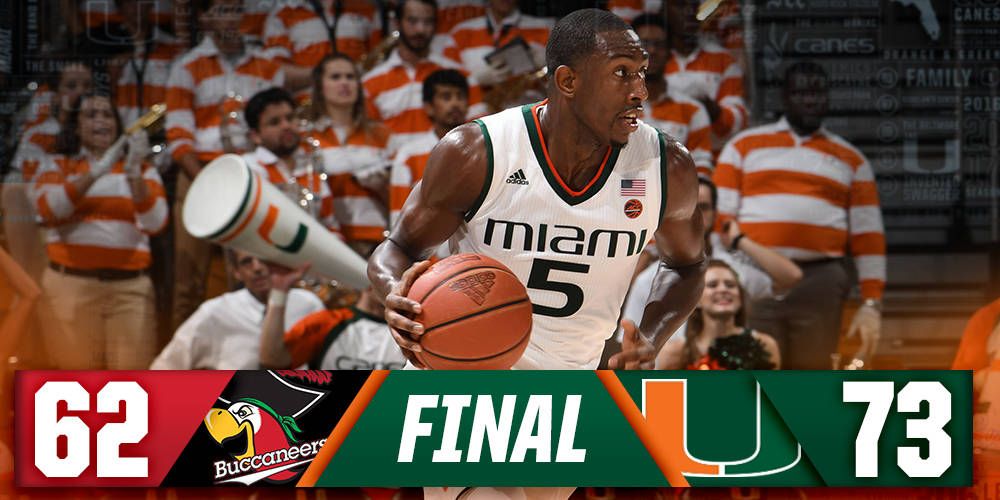 CORAL GABLES, Fla. – With the season opener just over a week away, the Miami Hurricanes hit the Watsco Center hardwood for the first time and defeated the Barry Buccaneers 73-62 to wrap up the preseason. Behind 21 points from senior Davon Reed and 18 points from junior Ja’Quan Newton, the Canes took another step towards the official start of the 2016-17 season.

The Canes opened up the game with their five returners in the starting lineup and came out of the gates quickly with an 8-0 run to open up the first half. Following the debuts of Miami’s five newcomers, Davon Reed returned to the game and with seven minutes left, hit his third three of the night to put UM up 30-15.

While Miami’s senior made a monumental impact on the game, freshman Bruce Brown looked the part too and scored five of his 10 points in the last six minutes of the half to lead the Canes to the break with a 38-31 advantage.

In the second half, Barry made things interesting behind a hot shooting performance from Elvar Fridriksson and Sawyer Glick. After a three-pointer from Glick with just under nine minutes remaining, the Canes lead was cut to 55-53. Following a timeout from Coach Jim Larrañaga, Miami’s veteran leaders took control and never looked back. The Canes ended the game on an 18-9 run and finished off the 73-62 victory.

The Hurricanes next action comes next Friday at 7 p.m. in their season opener against Western Carolina at the Watsco Center.