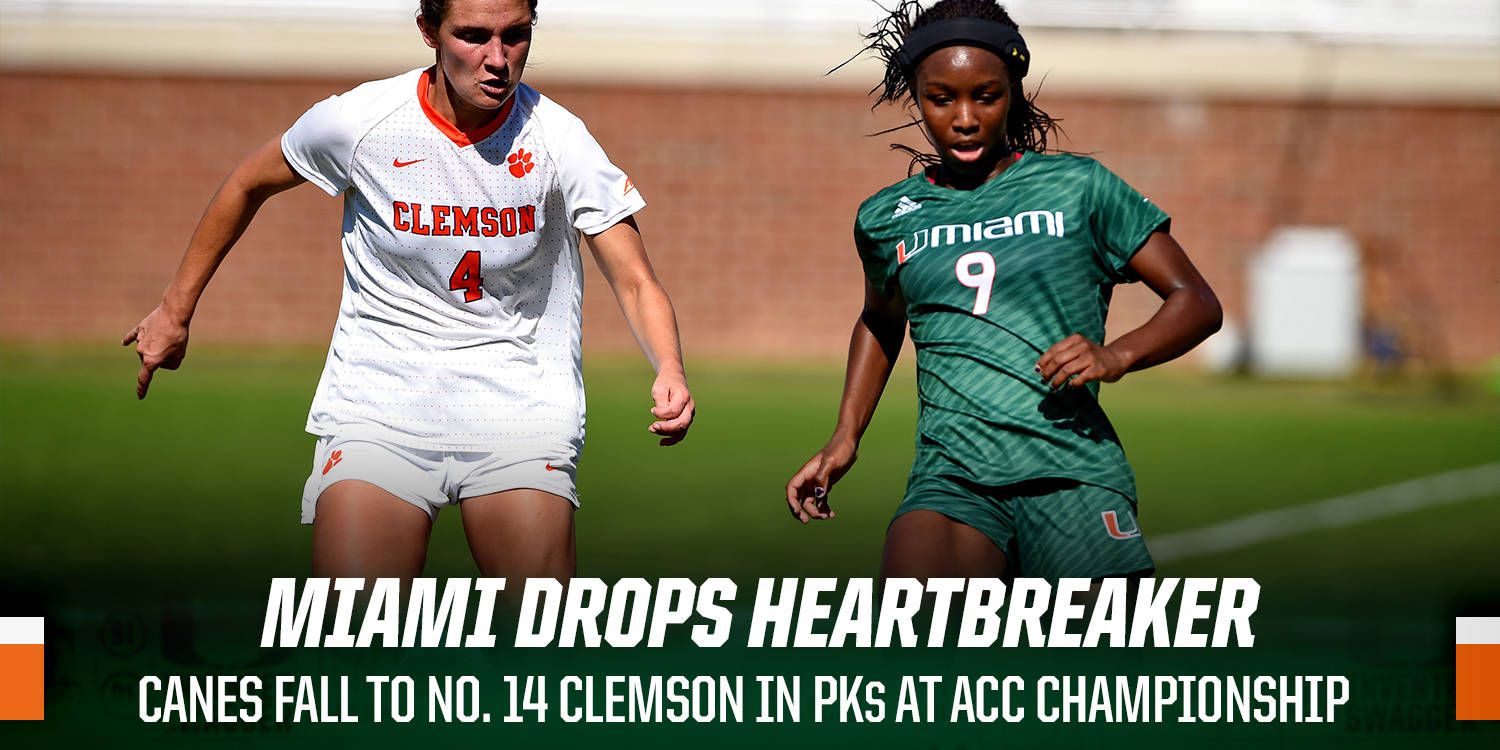 Miami Falls to No. 14 Clemson in Penalty Kicks

CLEMSON, S.C. – Making its first appearance in the ACC Championship since 2012, the University of Miami soccer team dropped a heartbreaking decision at No. 14 Clemson Sunday afternoon.

“I am very proud of our team today,” Miami head coach Mary-Frances Monroe said. “To be tied up and having to go into PKs with our conference co-champion, that’s a huge statement for our program.”

Clemson (13-3-3, 7-1-2 ACC) struck for the opening goal in the 10th minute on its first shot of the match and the first shot on goal of the day for either team.

Miami pulled level in the 26th minute when a pair of defenders linked up. Redshirt senior Shannon McCarthy sent a free kick into the box to the far post, finding senior Gianna Dal Pozzo, who volleyed it over Clemson senior goalkeeper Kailen Sheridan.

For Dal Pozzo, the equalizing tally was her first goal of the season and second of her career. The assist was the fifth of the year for McCarthy, moving her into sole possession of second place on the team.

The teams entered the intermission even at one, with both sides having notched two shots on goal in the opening 45 minutes. Both defensive units played well in the second half and neither side had many quality threats in the second 45 minutes.

With neither team able to find a go-ahead goal, the match went to extra time. It marked the third time in the last six matches the Hurricanes have gone to overtime.

Senior forward Gracie Lachowecki had the best chance of the first overtime session, but her strike in the 100th minute missed wide, sending the match to a second session of extra time.

The second overtime provided limited opportunities both ways and the scored stayed even through 110 minutes, sending the match to a penalty kick shootout.

Nine of the 10 attempts were good, with the lone missing coming on a stellar save by Sheridan on freshman forward Kristina Fisher’s strike, the third shot for Miami.

That stop was all the Tigers would need to win the shootout, 5-4, and advance to the semifinals of the ACC Championship.

“It’s unfortunate we lost in PKs and we are hopeful to get into the NCAA tournament,” Monroe said. “We have had a lot of success this year and I am just so proud of this group.”

With the match officially going down as a tie, it marked the first draw for the Hurricanes since a 3-3 result against Boston College on Oct. 20, 2014.

Miami will now await its fate for the NCAA Championship. The selection show is set for Nov. 7 at 4:30 p.m.