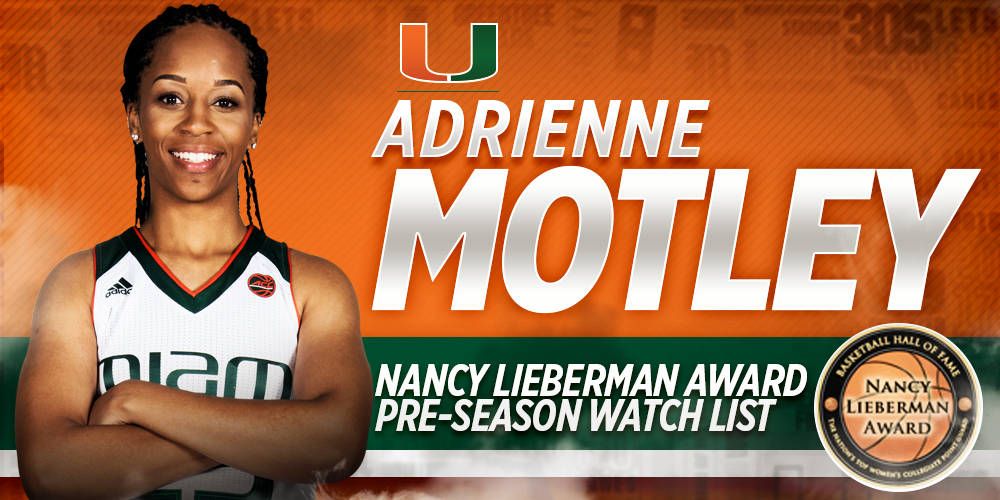 CORAL GABLES, Fla. – Adrienne Motley of the University of Miami women’s basketball team has been named to the 2017 Nancy Lieberman Award Pre-Season Watch List, as announced Monday by the Naismith Memorial Basketball Hall of Fame.

“It’s truly an honor to be the namesake of this award recognizing the best point guards in college basketball,” Lieberman said. “When you look at the list of winners over the past 16 years, we’ve celebrated some extraordinarily talented players and I can’t wait to see who will earn the right to have her name among these greats.”

Motley is one of 20 preseason candidates for the honor, including one of four from the ACC, joining Duke’s Lexie Brown, Notre Dame’s Lindsay Allen and Syracuse’s Alexis Peterson.

For Motley, the recognition adds to a long list of accolades she has received in advance of the 206-17 season. The senior from Newport News, Va., was named a Preseason All-ACC Team member by the Blue Ribbon Panel and the ACC Coaches, as well as a College Sports Madness Preseason Fourth Team All-American.

Past winners of the distinction include Sue Bird, Lindsey Harding, Odyssey Sims and Diana Taurasi, among many other collegiate stars.

For more information on the 2017 Nancy Lieberman Award, log onto www.pointguard.org.