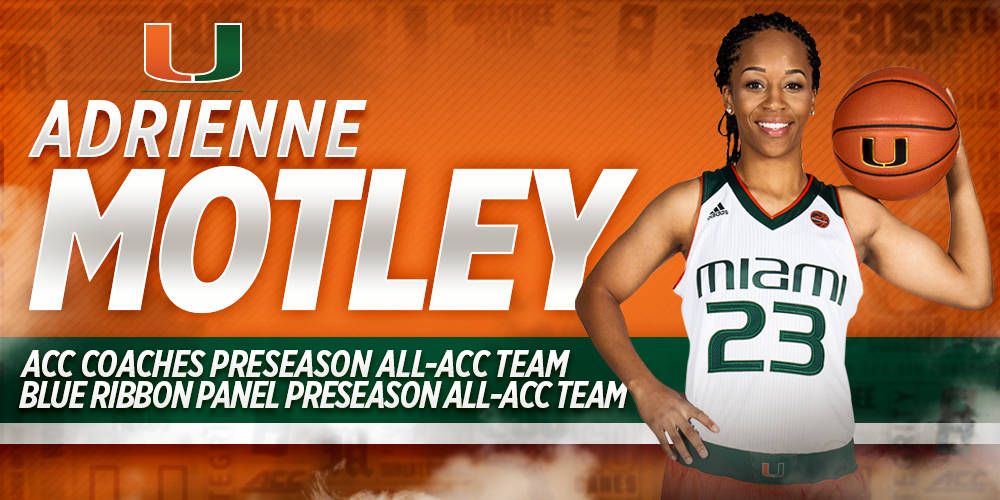 The University of Miami was voted to finish fifth by both the ACC Coaches and the Blue Ribbon Panel. It is the highest the Hurricanes have been tabbed since earning the No. 1 spot before the 2011-12 season.

Miami senior guard Adrienne Motley was selected as a member of the Preseason All-ACC Team by both outlets for the second year in a row.

“I think that some schools would be disappointed to be picked fifth, especially with all the success we’ve had,” Miami head coach Katie Meier said, “but given that the ACC is probably sending eight or nine teams to the NCAA Tournament, number five is top-25 status and that is truly what we are.”

For the Hurricanes, who return all but one letter winner from last year’s 24-9 (10-6 ACC) team, this is the third time they have been picked in the top five. In addition to the aforementioned No. 1 prediction in 2011, Miami was voted second in 2010.

Notre Dame, which is 47-1 in ACC play in its three years in the conference with its lone loss coming at Miami in 2015, was named the preseason favorite in both polls.

Meanwhile, Motley joins Shenise Johnson, Tamara James and current Miami assistant coach Octavia Blue as the lone players in program history to earn multiple preseason all-conference recognitions. Motley, Johnson and James are the lone players to do so in the ACC.

“Throughout her career, Adrienne has proven herself to be one of the top guards in the country,” Meier said. “Her versatility and consistency make her such a fantastic player to coach. She has made such an impact at Miami since her arrival.”

A College Sports Madness Preseason Fourth Team All-American, Motley has been named a First Team All-ACC honoree each of the last two seasons. She was one of three players to rank in the top 10 in the ACC last year in scoring (sixth, 15.7), 3-point percentage (ninth, 36.5) and free throw percentage (No. 10, 76.7).