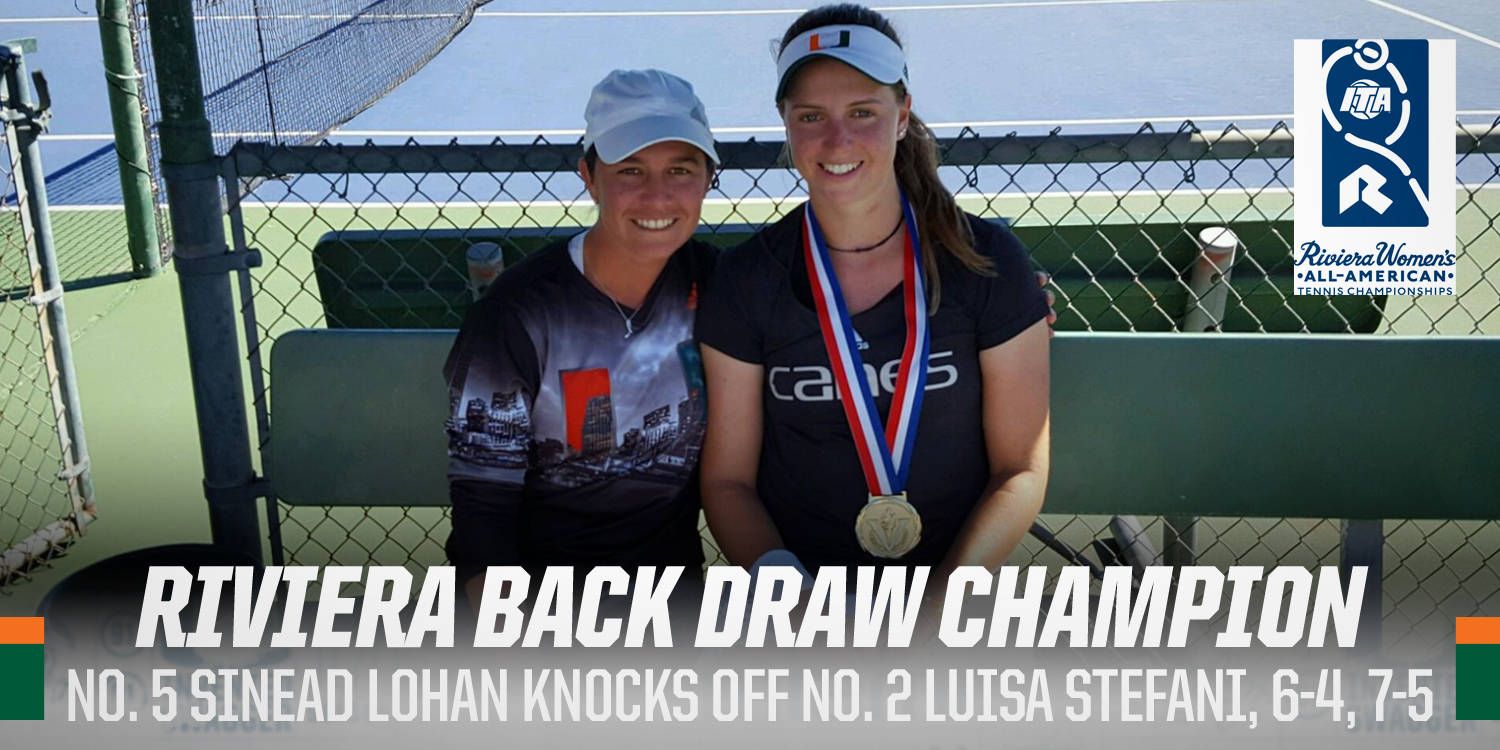 Lohan Tops No. 2 Stefani to Win Riviera Back Draw

The fifth-ranked player in the country, Lohan took down second-ranked Luisa Stefani of Pepperdine in straight sets, 6-3, 7-5, to win the singles back draw title.

Stefani, the 2016 ITA National Rookie of the Year, is the highest-ranked player Lohan has defeated in her illustrious career. She is the fourth top-10 opponent the Miami junior has beat, including the third top-five player.

“Sinead is so tough. Through good and not so good, she just figures it out. Pure heart,” Miami associate head coach Laura Vallverdu said. “I am very proud of the week that she had. She fought hard to get there all on her own.”

In 2016, Lohan and Stefani both earned ITA All-America honors in singles after finishing the season ranked in the top six and advancing to the semifinals of the NCAA Singles Championship.

Lohan was the second seed in the tournament’s back draw and defeated four top-50 players, including three in the top-20, in a three-day span to earn the medal. Stefani was seeded first in the back draw.

This marked the first time in Lohan’s career she has competed in a top-five showdown. She is also now 2-1 against top-10 players when she is also ranked in the top 10. Additionally, the Waterford, Ireland, native is 42-14 overall against ranked players as a Hurricane.

“Sinead has to continue to get better when we return home,” Vallverdu said. “She has to define what will be efficient tennis for her against the best players and improve from there.”

After last year becoming the first Hurricane to reach the final of the main draw at the Riviera/ITA Women’s All-American Championships, Lohan is now an outstanding 8-2 in her career in Pacific Palisades. All eight wins are against top-50 players, with six against top-20 opponents and two against players ranked in the top three.

All Riviera/ITA Women’s All-American Championships information can be found on the ITA event page HERE.

Lohan and the Hurricanes will be back in action Oct. 14-16 when they take part in the Michigan Invitational in Ann Arbor, Mich.