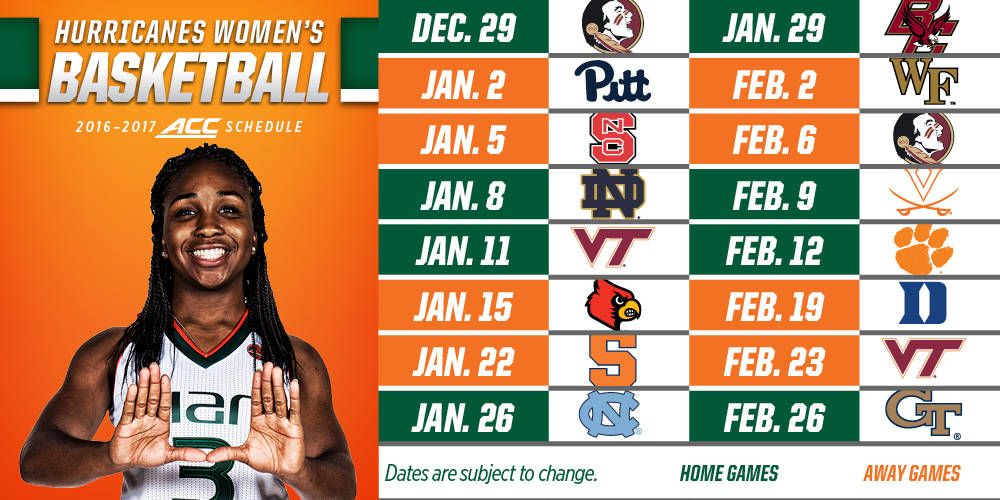 The Hurricanes will play six games, including four on the road, against teams in ESPN’s 2016 “way-too-early preseason top 25,” a list Miami is ranked No. 18 in.

“We believe that we will be battle-tested after our extremely competitive non-conference schedule and will be ready for the challenges of meeting these ranked conference opponents,” Miami head coach Katie Meier said.

Miami will open conference play Dec. 29 when it hosts Florida State in the first of two regular season matchups against the Seminoles, who are No. 15 in the aforementioned ESPN poll.

The Hurricanes then have a two-game road trip that includes a Jan. 2 matchup at Pittsburgh and a Jan. 5 contest at NC State, which is No. 25, per ESPN’s early rankings.

Miami returns home to host Notre Dame (Jan. 8) and Virginia Tech (Jan. 11). The game against the Fighting Irish, who are ranked No. 1 in ESPN’s poll, is an ESPN Flex game (ESPN2, ESPNU or ACC Network Extra). Notre Dame’s lone defeat in ACC play in three years in the conference came in 2015 at Miami.

The Hurricanes will take on Louisville, the No. 2 team in the ESPN rankings, Jan. 15 on ESPN2. Then comes a game at Syracuse, which is also in the top 20 and reached the 2016 national championship, Jan. 22 on RSN.

After that road swing, Miami will welcome North Carolina to Coral Gables for a Jan. 26 contest on RSN and then host Boston College Jan. 29.

Following the two-game homestand is a Feb. 2 contest at Wake Forest and the return game against Florida State, set for Feb. 6 on RSN.

On its home court, Miami then takes on Virginia and Clemson, on Feb. 9 and Feb. 12, respectively.

Miami will wrap up its conference slate Feb. 26 when it hosts Georgia Tech on RSN in a game that will also serve as senior day.

“I believe with the experience and leadership our upperclassmen bring, this is going to be an exciting basketball team,” Meier said. “People are going to want to see our high-powered, fast-paced team. We have a veteran squad with tremendous ACC and postseason experience. Last season created some buzz and we are excited for the opportunity to build on that and make this season a special one.”