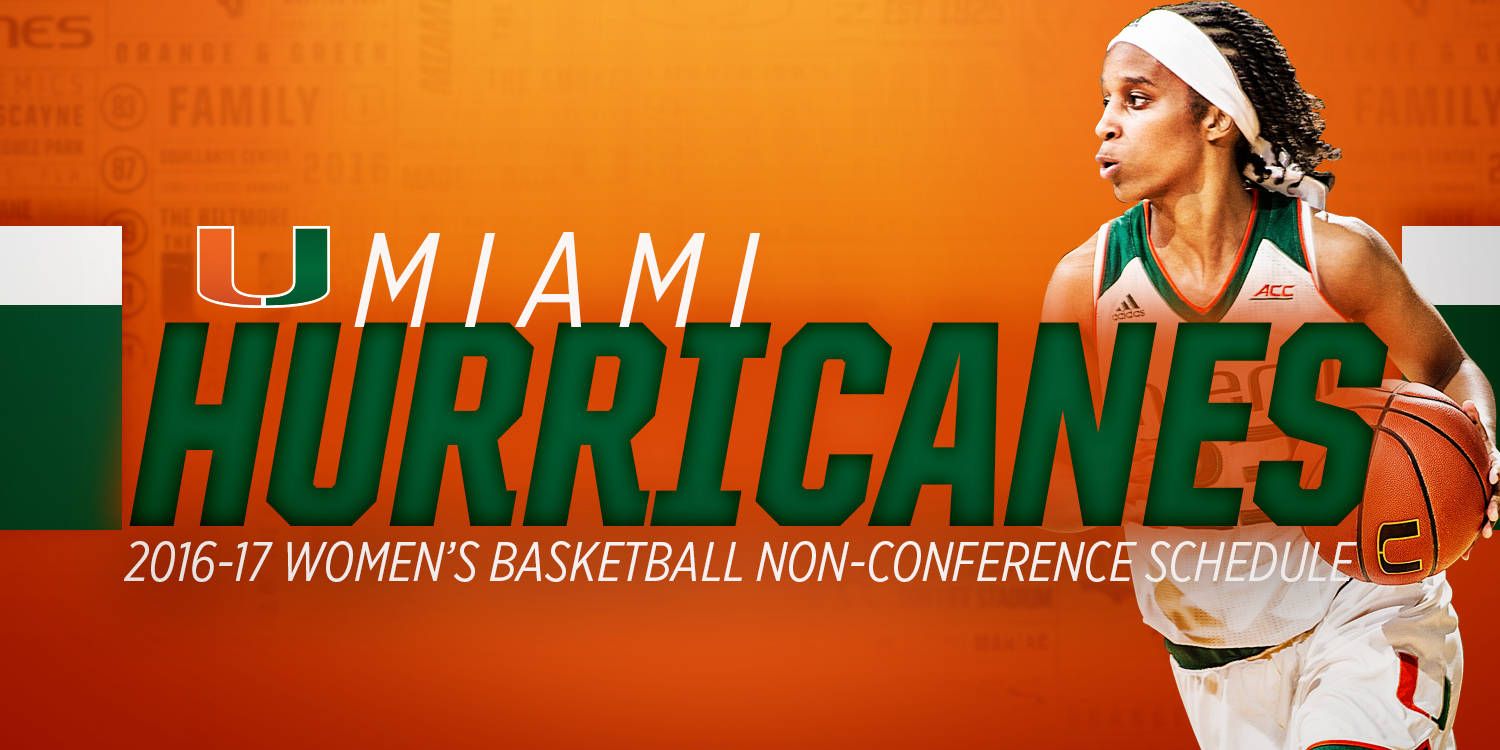 The Hurricanes will play 12 games between Nov. 11 and Dec. 20, with seven of them coming at home at the BankUnited Center. Miami will play four teams that reached the 2015 NCAA Tournament, a fifth that made last year’s WNIT and could meet another WNIT team in a tournament.

Meier’s team is set for two road games against teams that reached the Sweet 16 last season, opening at Kentucky and meeting Ohio State in the ACC/Big Ten Challenge. Both teams finished top-15 in the 2015 USA TODAY Coaches Poll and are also in the top 15 of ESPN’s “way-too-early preseason top 25” for 2016.

“Obviously, we have really challenged ourselves with our non-conference schedule,” Meier said. “We are certainly excited to play such tough road games and expect these games to prepare us for ACC and postseason contests.”

The Hurricanes will begin the season at the Kentucky Classic in Lexington, Ky., facing Kentucky on Nov. 11 and Albany two days later, both at 7 p.m. The Wildcats are 186-57 with five Sweet 16 trips and three Elite Eight berths over the last seven seasons. The Great Danes reached the second round of the 2016 NCAA Tournament.

Miami hosts Charlotte, which made the 2015 WNIT, in its home opener at the BUC on Nov. 16 at 7 p.m. Meier spent four seasons as the head coach of the 49ers before taking over at Miami.

Next up for the Hurricanes, who are No. 18 in ESPN’s aforementioned early top 25 poll, will be a road contest at St. John’s, which reached last season’s NCAA Tournament, on Nov. 20 at 7 p.m.

The Miami Thanksgiving Tournament will be held Nov. 25 and 27 at the BUC. On day one, Fordham faces Texas Tech at 2 p.m. and Miami takes on Grambling State at 4 p.m. The winning teams will then play each other on day two, as will the losing teams.

Ohio State, which is 50-19 over the past two seasons, will host Miami in the ACC/Big Ten Challenge on Dec. 1, with the Hurricanes seeking a third straight win in the event. The team will then return home to play Old Dominion, a three-time national champion, on Dec. 4 at 2 p.m.

“We have high expectations for the season,” Meier said. “I love the talent and experience that we return and know that we will build on these non-conference challenges so we can be an awesome team in March.”

Miami will host the third annual elementary school day on Dec. 6 when it welcomes Loyola Chicago to the BUC for an 11 a.m, tip-off. The game will have thousands of young children from local Miami-Dade County schools in the stands.

Following that contest, the Hurricanes will play FIU on the road for the first time since 2008, as the sides square off across town on Dec. 16.

Meier’s team will conclude non-conference play with the Miami Holiday Tournament at the BUC on Dec. 19 and 20. East Tennessee State meets Maine, which reached the 2015 WNIT, in the opener at 3 p.m., and Miami faces Coppin State at 5 p.m., with the winners and losers squaring off against each other the following day.