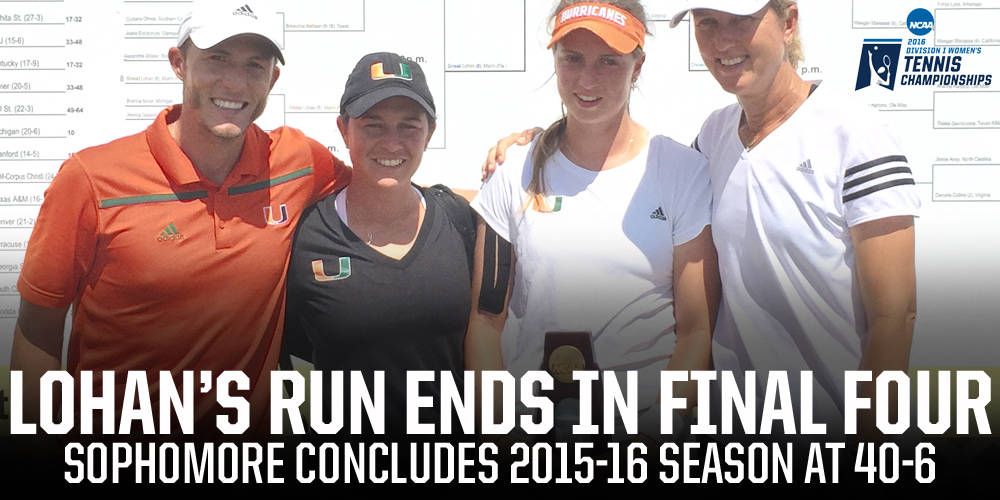 Lohan Drops Three-Setter in Semis to No. 1 Carter

Lohan, both ranked and seeded eighth, came up just short to the tournament’s top seed, dropping a hard-fought 6-1, 5-7, 2-6 decision at the Michel D. Case Tennis Center on the campus of the University of Tulsa. Lohan, who had not been defeated in a singles match since Feb. 5, had a 5-3 lead in the second set and a match point at 5-4, but Carter managed to stay alive and went on to earn the victory.

A native of Waterford, Ireland, Lohan concludes one of the greatest seasons in program history with a 40-6 singles record, including a 29-2 mark in spring play. She went 23-6 versus ranked players, including 17-6 against top-50 opponents.

“She lost two matches on the spring. I couldn’t be more proud of what she stands for and what she’s brought to this program,” Miami head coach Paige Yaroshuk-Tews said. “She’s just a winner, all the way around. She came up a little bit short today against a great player. You got to give Carter credit. She’s an absolute warrior. She’s a beast out there, and so is Sinead, but somebody’s got to win and somebody’s got to lose, and today it was Carter [who won].”

Carter won the first game of the match, but then Lohan took over for the remainder of the first set, winning six consecutive games to take the opener, 6-1.

The second set began with Carter taking the first two games, but Lohan responded with two straight wins of her own. After Carter went up 3-2, Lohan won each of the next three games to grab a 5-3 edge and pull within a game of victory. A five-minute rain delay halted play during the eighth game of the set.

Carter held to trim her deficit to a game and went up 40-15 in the next game. Lohan then won back-to-back points to force a deciding point and a match point, but Carter staved it off to tie the set. She then won two games in a row to take the second set, 7-5.

“Up, there in the second set, [Sinead] got a little greedy. She was feeling good,” Yaroshuk-Tews said. “She knew she had command of the match and the 5-3 game was an undisciplined game. We talked about it before the match; you can’t afford to play one undisciplined game against Hayley Carter. You let her in the match, you give her a little momentum and things change very quickly. Those are the intricacies of playing at this level. It comes down to points, games, a couple decisions here and there.”

Weather once game led to a suspension of play, this time for an hour, before the third set began. When action resumed, Carter went up 2-0, but again Lohan managed to storm back and tie the score.

“[Sinead] had made unbelievable decisions to put herself in a position to be leading in the match, and she made a couple bad decisions to let Hayley back in the match,” Yaroshuk-Tews said. “You open the door against Hayley, she forearms that thing and she comes right in, and that’s exactly what happened. We’ve seen it before and we’ve got to get better in those situations.”

Despite the defeat, Lohan more than made her mark during her sophomore year. Her 40 victories are tied for the third-most in a season by a Hurricane and she is the fifth Miami player to reach 40. Lohan joins 2007 national champion Audra Cohen as the lone Miami players to win at least 40 matches in a campaign and make the NCAA Singles Championship Final Four.

For more information on the University of Miami women’s tennis program, follow @CanesWTennis.