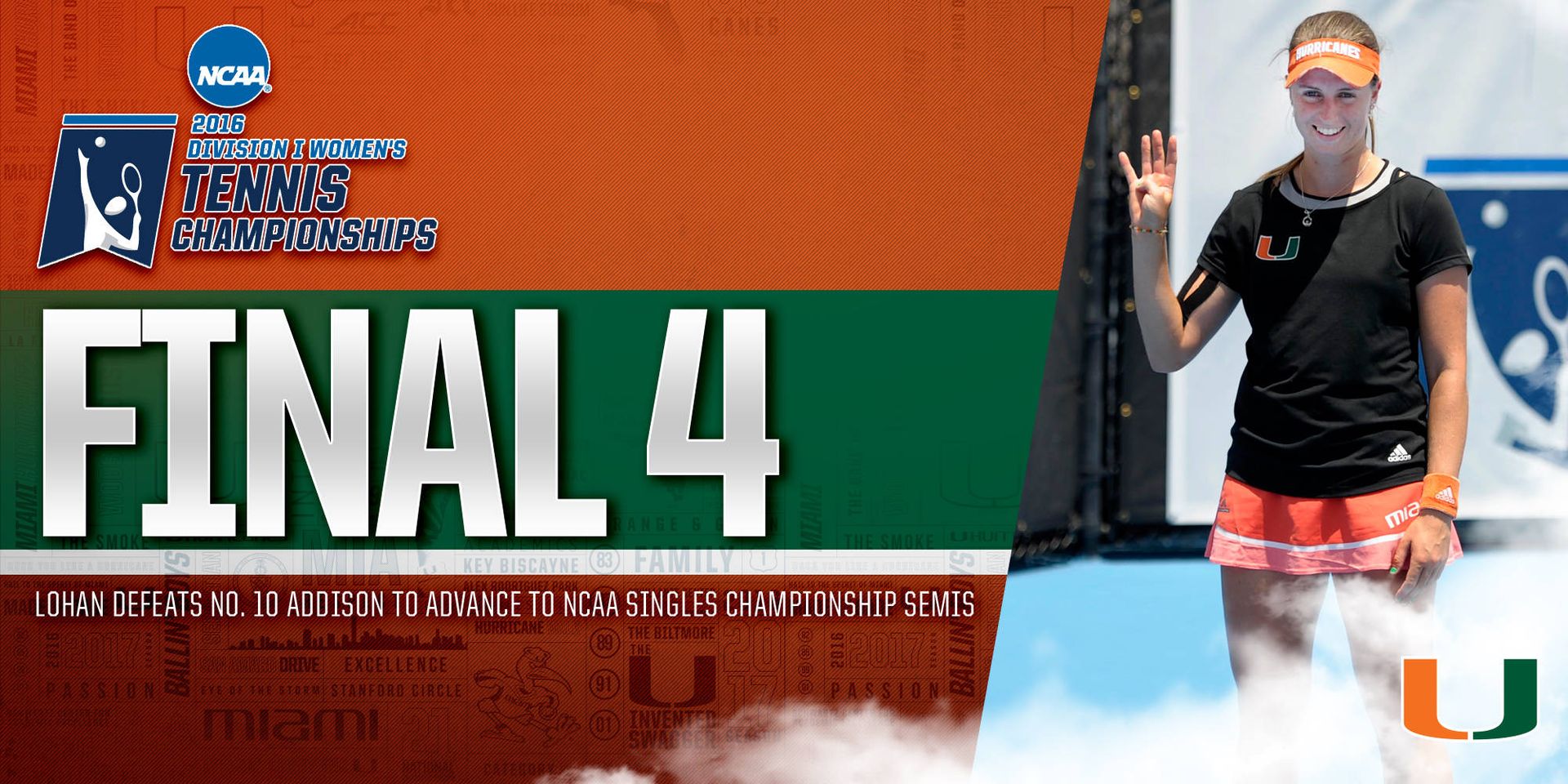 TULSA, Okla. – For the second consecutive year, a member of the University of Miami women’s tennis team is going to the Final Four of the NCAA Singles Championship.

Eighth-ranked and eighth-seeded Sinead Lohan earned a 6-2, 6-4 victory over Texas’ Breaunna Addison, ranked No. 10 and seeded No. 9-16, Saturday in the Elite Eight at the Michael D. Case Tennis Center on the University of Tulsa campus.

Lohan, who reached the quarterfinals as a freshman in 2015, is set to make the eighth semifinal appearance in program history and just the second by a sophomore. She is the seventh Hurricane to reach the Final Four.

“We’ve been saying all season that the kid is a rock, and she’s still a rock,” Miami head coach Paige Yaroshuk-Tews said. “She’s got a couple matches in front of her, but we just need to take it one day at a time. She played a great player today, who changed up her game well at important times in the match and, once again, Sinead figured it out and got on track quickly. To be in the semifinals of this tournament is big.”

After winning the first two games of the match, Lohan dropped the next two and the score was even at 2-2. Lohan, a native of Waterford, Ireland, then won four games in a row to clinch the first set, 6-2.

The Longhorn senior won the first two games of the second set. Facing her first multi-game deficit in any set all tournament, Lohan responded by winning four games in a row—making it eight of the past 10—to go up 4-2 in the second set.

Addison, who hails from Boca Raton, Fla., took back-to-back games to even the set, but Lohan held serve to take a 5-4 edge in set two. Addison then fought off one match point in the next game, bringing it to a deciding point, but her forehand sailed long and Lohan took the match, 6-2, 6-4.

Lohan, who has won the second set 6-4 in all four of her matches in the NCAA Singles Championship thus far, broke Addison’s stellar serve six of nine times in the contest.

“Sinead was able to neutralize the point well and not allow [Addison] to play the type of game she wanted to play,” Yaroshuk-Tews said. “That was a little uncomfortable for Sinead, but it was effective in terms of winning the match. That’s what she did well. She absorbed the pace when she needed to and then she pressed when she needed to. That’s what great players do and she did it a little better than Addison today.”

Seven of the eight Final Four appearances by a Hurricane have come in the past 13 years, all under Yaroshuk-Tews’ guidance, including five in the last eight years alone.

Lohan now has seven-career wins in NCAA Singles Championship play, good for the fourth-most by a Hurricane. At 40-5 in 2015-16, Lohan is tied for the third-most wins in a campaign in program history and is just the fifth player to record at least 40 victories in a season. Addison was the second top-10 player Lohan has defeated this season, including the first in the spring.

“I always knew that she was not going to give it to me easily,” Lohan said. “She is a fighter and even when I was up, I knew that I couldn’t take my foot off the pedal and go easy. I know how much of a fighter she is, so I am just happy to get it done.”

Lohan is joined in the Final Four by two ACC counterparts, top-ranked Hayley Carter of North Carolina and second-ranked Danielle Collins of Virginia. Sixth-ranked and seventh-seeded Luisa Stefani of Pepperdine is the other semifinalist. Lohan will face Carter, the tournament’s top seed, in the semifinals Sunday at 1 p.m. ET.

“To have an opportunity to see Carter tomorrow is big,” Yaroshuk-Tews said, “and I know [Sinead] is looking to take another step forward.”