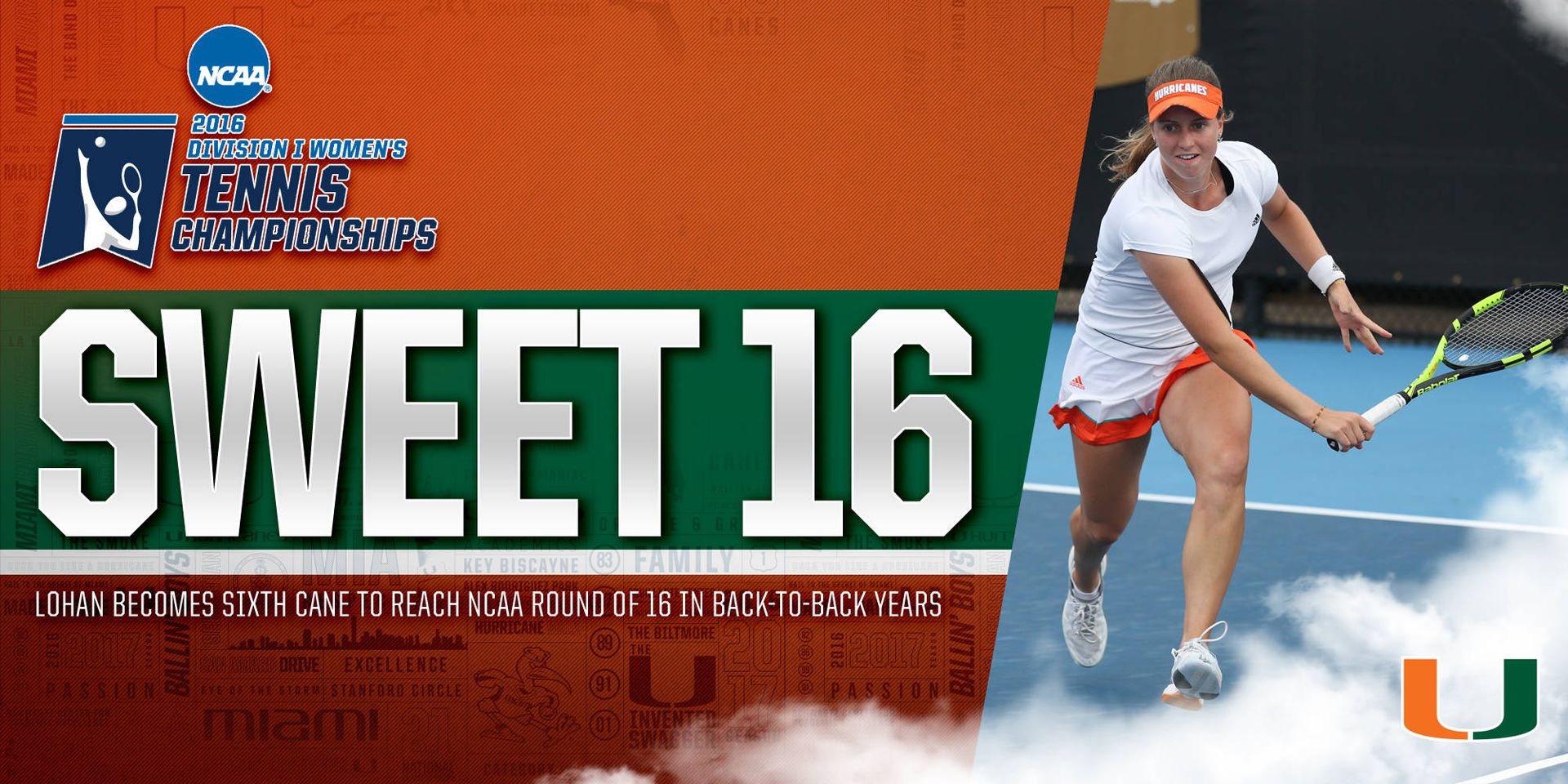 TULSA, Okla. – Sinead Lohan of the University of Miami women’s tennis team placed herself next to some elite company Thursday by advancing to the NCAA Singles Championship Sweet 16 for the second consecutive year.

Lohan, who is both ranked and seeded eighth, defeated No. 59 Jessica Golovin of LSU, 6-2, 6-4, at the Michael D. Case Tennis Center on the campus of the University of Tulsa to clinch the berth.

With the win, Lohan becomes the eighth Hurricane to reach the Sweet 16 multiple times, the sixth to do so in back-to-back years and just the third to advance to round three in her freshman and sophomore campaigns.

“I think Sinead has proven to us over the course of the last almost two years now, that consistency is her thing,” Miami head coach Paige Yaroshuk-Tews said of Lohan again making the Sweet 16. “She’s far from done. There’s no doubt in our minds that this kid is going to go far and be in the record books, but right now we want to get her one step further in this tournament.”

Golovin held serve to open the match and then Lohan fell behind 0-40 in the second game. From there, the Waterford, Ireland, native took over, winning four straight points to take the game and then each of the next three games to go up, 4-1, in the first set.

After Golovin broke to cut her deficit to two games, Lohan closed out the opening set with back-to-back wins, taking set one, 6-2.

The first four games of the second set were split, with each player taking a pair. Lohan then won consecutive games to take a 4-2 edge. Golovin answered by earning victories in two of the next three games to trim Lohan’s lead to 5-4.

However, the LSU standout was not able to even the score, as Lohan held serve to close the match and win it, 6-2, 6-4.

“Unorthodox style that, that girl had from LSU, but Sinead figured it out after one game and that’s what Sinead does really well,” Yaroshuk-Tews said. “It takes her a matter of points to figure players out and to figure situations out, and she was able to do that fast today. She won almost every deuce point. I think she played the big points really well and that’s what she’s going to have to do moving forward.”

With the victory, Lohan becomes the first Hurricane since Bianca Eichkorn and Laura Vallverdu in 2009 and 2010 to reach the Sweet 16 in two straight years. Eichkorn is the second-winningest singles player in program history and Vallverdu, Miami’s associate head coach, ranks third.

The only other Hurricanes to reach the NCAA Singles Championship Round of 16 as both a freshman and a sophomore were Lioudmila Skavronskaia (1998 and 1999) and Ronni Reis (1985 and 1986). Lohan, who made the Elite Eight in 2015, is naow one of nine Hurricanes to win at least five-career matches in the prestigious tournament.

Lohan will be back on the court Friday in the NCAA Singles Championship Sweet 16. She will face No. 35 Deisrae Krawczyk of Arizona State at 11 a.m. ET.