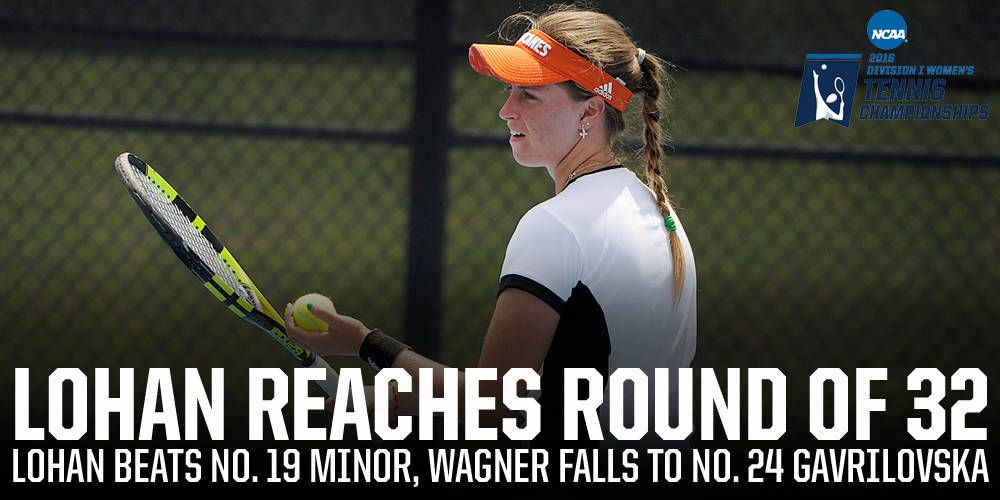 Lohan Tops No. 19 Minor in NCAA Singles Round One

TULSA, Okla. – Sophomore Sinead Lohan of the University of Miami women’s tennis team advanced to the second round of the NCAA Singles Championship Wednesday with her third top-20 straight-set win of the spring.

Lohan, both ranked and seeded eighth, defeated No. 19 Brienne Minor of Michigan for the second time in the past week, picking up a 6-3, 6-4 victory at the Michael D. Case Tennis Center on the University of Tulsa campus.

In addition, senior Stephanie Wagner had her outstanding career come to an end against No. 24 Saska Gavrilovska. Ranked ninth and seeded No. 9-16, Wagner dropped the close match, 6-7 (8-10), 4-6.

“The conditions were pretty tough today with the wind, but I think that Sinead just got it done,” Miami head coach Paige Yaroshuk-Tews said. “She did what she needed to do. She played the big points well today. She played smart in the win. She was lifting on the correct side, she was looking for the short balls and she beat a great player.”

Facing the same player she met in her most recent match in the NCAA Team Championship Sweet 16, Lohan held serve wire-to-wire against Minor Wednesday.

At 2-2 in the first set, Lohan won three games in a row to go up 5-2. After a Minor hold, Lohan clinched the first set in the next game to take the opening set by the same score, 6-3, just as she did in her prior meeting against Minor last Thursday.

Minor opened the second set by taking her first lead in any of the four sets the duo played in Tulsa. That began a stretch of eight consecutive holds to begin set two.

Serving at 4-4, Minor double faulted all four points to give Lohan a 5-4 lead and the only break of the set. The Waterford, Ireland, native then sealed the win in the next game to move on to the Round of 32.

“Minor is a great player. To beat her two times in the last week, once inside and once outside, I think says a lot about where [Lohan] is mentally,” Yaroshuk-Tews said. “It wasn’t her best tennis today, but she showed up and she competed and a lot of these first rounds, that’s what you need to do in the tournament.”

Wagner, the lone 2015 semifinalist in this year’s field, became the fifth player in program history to compete in the NCAA Singles Championship four times. After Wagner defeated Gavrilovska in the Sweet 16 of last year’s tournament, the Aggie came away with the victory this time. This was just the second time a Hurricane faced the same player in the NCAA Singles Championship in consecutive years.

The first two games of the match were holds, followed by six breaks and then four more holds to send the opening set to a tiebreaker. Wagner led 5-3 and then went on to face four set points from Gavrilovska, staving off the first three, but not the last, en route to dropping the first set 6-7 (8-10). It was the second-longest tiebreaker by a Hurricane in NCAA Singles Championship history.

After five holds to open the second set, Wagner took the first two-game lead by either player in either set with a break to go up 4-2, but Gavrilovska then won four games in a row to take the match.

Wagner concludes her illustrious career as a four-time All-ACC honoree, a soon-to-be two-time ITA All-American and the winningest singles player in program history with a record of 134-44. Her six wins in NCAA Singles Championship play are tied for fourth-most at Miami.

“It’s tough to put it into words,” Yaroshuk-Tews said of Wagner’s stellar career. “She has represented this program at such a high level for four years. We really couldn’t be prouder of just what she has done in her time here, what she’s meant to our program and what she going to continue to mean to our program moving forward. She lost a tough match today.”

Lohan will return to action Thursday at 10 a.m. ET in the second round of the NCAA Singles Championship against No. 59 Jessica Golovin of LSU.