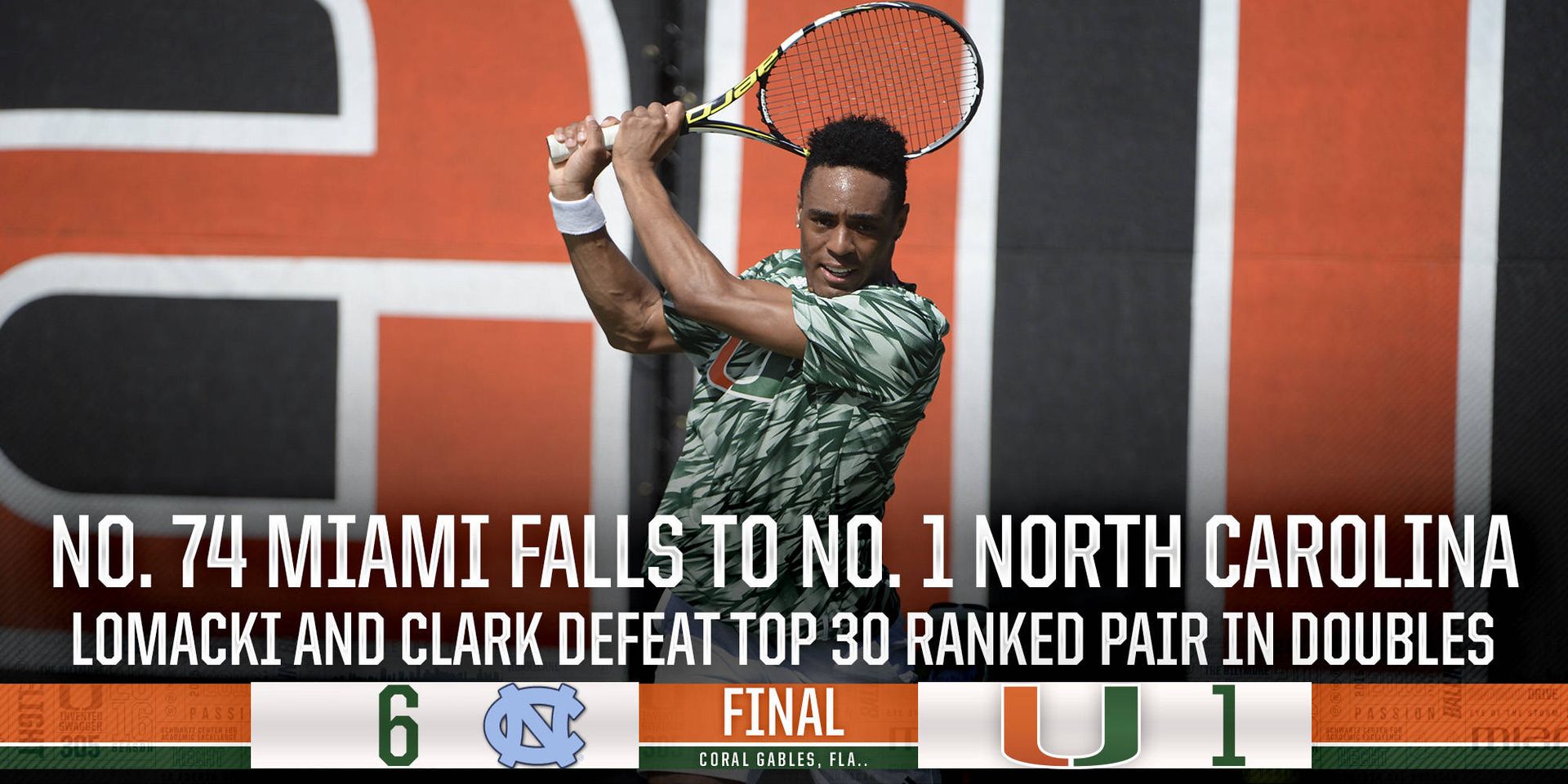 No. 74 Miami Falls to No.1 North Carolina

“I thought we had great chances throughout the day,” said head coach Mario Rincon. “Our guys competed their hearts out and we’re getting better, and hopefully we’ll get the entire squad healthy and ready to go and play great next weekend.”

Doubles play ultimately came down to the wire, but the Tar Heels narrowly edged out Miami. At the No. 2 the duo of Nile Clark and Piotr Lomacki defeated 30th ranked Jack Murray and Brayden Schnur, 6-4, to give Miami the upper hand.

At the No. 3 Kevin Bondar and Fermin Calvo dropped their set against Andrew Gores and Ronnie Schneider, 6-3.

It came down to Max Andrews and Bernard Tefel at the No. 1 position, playing against third-ranked Robert Kelly and Brett Clark. Andrews and Tefel came up short, falling 7-5.

The Canes fought hard in singles play, but it wasn’t enough to clinch the victory against the Tar Heels.

No. 28 Lomacki walked away with a singles point only midway through his first set after No. 38 Brayden Schnur was forced to retire due to injury. Lomacki left his match at 4-1 to give Miami its sole point for the day.

Andrews gave it his all but came up shy against 12th-ranked Ronnie Scheinder 7-6, 6-3.

“Today, I really felt that North Carolina did a great job of keeping a little bit more pressure on us in the big important moments of the match,” said assistant coach Mark Dickson. “In doubles we had it on our rackets on two courts and had a lot of momentum. To North Carolina’s credit they made pressure plays, they put their serves in and they changed court position.”

After a nine-match home court stint, Miami will head to No. 38 Notre Dame and Boston College. The Canes will take on the Eagles on Friday, March 18 at 5 p.m. and the Fighting Irish on Sunday, March 20 at 12 p.m. The Canes are now 6-7 overall and 1-2 in ACC play.