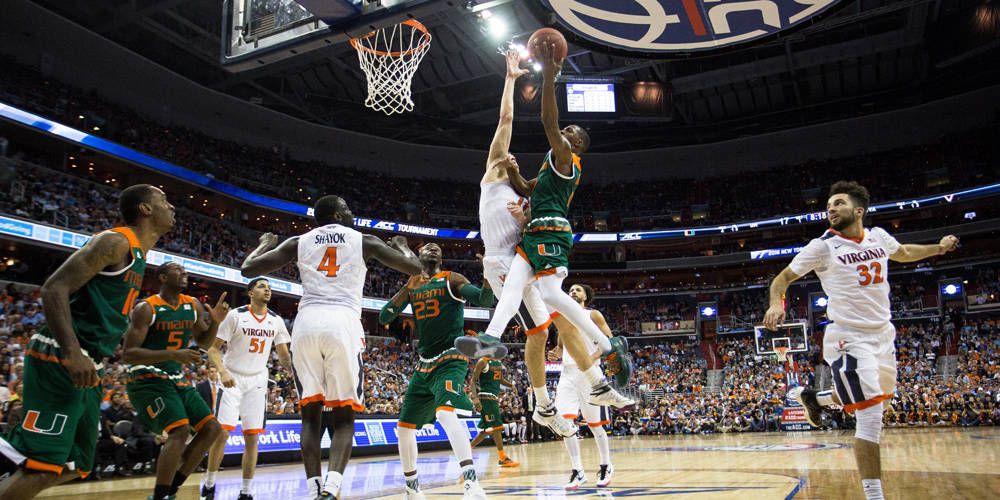 WASHINGTON — Ja’Quan Newton scored 19 points on 5-7 shooting from the floor, but Miami fell to Virginia in the semifinal round of the ACC Tournament, 73-68.

Virginia (26-6) got by Miami (25-7) using defense and solid bench play, setting up a matchup with North Carolina in the ACC tournament final.

Beginning with Brogdon’s 3-pointer 48 seconds in, Virginia led the entire first half. The Cavaliers went up by as many as 11 as eight different players scored but watched as Miami went on a 6-0 run to end the half and cut the margin to five.

Facing the same kind of hostile environment as Thursday night against Virginia Tech, Miami cut it as close as three points. A series of turnovers stunted the comeback bid, and Brogdon went to work scoring and playmaking.

With help from Marial Shayok (10 points) and London Perrantes (11 points), Virginia pulled away to lead by 13 with 3:10 left. The Hurricanes must now turn their attention to the NCAA Tournament, where they’re expected to be a high seed.

Miami: Ivan Cruz Uceda did not play in the quarterfinal victory because of Virginia Tech’s speed, according to coach Jim Larranaga, who said the big forward would be a “major player” against Virginia. Cruz Uceda scored all eight of his points in the first half. … Senior guard Sheldon McClellan fouled out with 46.2 seconds left. He finished with 15 points on 5 of 11 shooting.

-Miami made its third all-time appearance in the ACC Semifinal Round.

-Miami dropped to 1-2 all-time in the Semifinal Round of the ACC Tournament.

-The Hurricanes’ semifinal matchup with Virginia was their 24th all-time game in the ACC Tournament.

-Miami holds a 13-11 record in the ACC Tournament following the loss.

-Miami fell to the Cavaliers in two of the three meetings this season.

-The Hurricanes hold a 1-2 all-time record against Virginia in the ACC Tournament.

-Miami’s bench outscored Virginia’s 32-24. The Hurricanes also held a 32-30 advantage in points in the paint.

-Miami closed the first half on a 6-0 run and went into the locker room trailing 36-31 at the half.

-The Hurricanes closed to within three points of Virginia in the second half, but were unable to ever take the lead.

-Sophomore guard Ja’Quan Newton scored a team-high 19 points, coming off the bench. He connected on 5-of-7 shots from the field.

-Newton’s 19 points were one point shy of tying his career high.

-Newton has scored in double figures 20 times this season.

– With 15 points against Virginia, senior guard Sheldon McClellan scored in double-digits for the 20th straight game and for the 28th time this season. The last contest McClellan did not reach double figures was Dec. 29th against Princeton.

-Senior guard Angel Rodriguez scored nine points, all of which came in the second half.