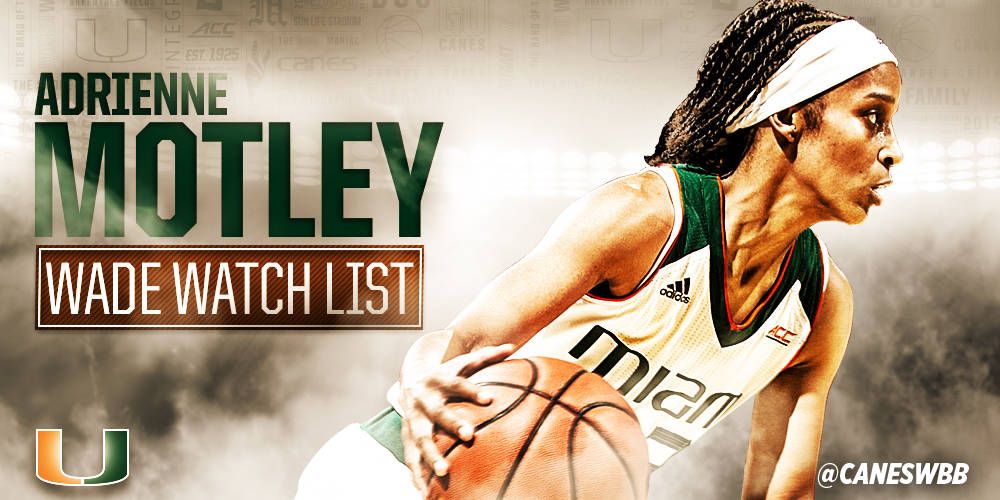 CORAL GABLES, Fla. – Adrienne Motley of the University of Miami women’s basketball team was tabbed as one of 32 players on the Wade Watch List, the Women’s Basketball Coaches Association (WBCA) announced.

A junior guard, Motley was one of five ACC players, one of 17 non-seniors and one of 17 guards to make the list for the prestigious national player of the year award.

“This honor again goes to show that Adrienne is truly among the best players in the country,” Miami head coach Katie Meier said. “She has done an exceptional job of leading this team both with her skills on the court and as a captain. We are all thrilled for her to be a part of this prominent list and it is a well-deserved accolade.”

Motley was named a First Team All-ACC selection by both the Blue Ribbon Panel and the ACC Coaches for the second-straight season. Previously this season, she was selected to both the Naismith Trophy Early Season Watch List and The Dawn Staley Award Mid-Season Watch List.

A native of Newport News, Va., Motley is the fifth-leading scorer in the ACC at 15.6 points per game. She also ranks No. 10 in both 3-point percentage (37.0) and free throw percentage (77.3). Motley is one of just three players in the top 10 of all three aforementioned conference lists.

A team co-captain, Motley and No. 19/20 Miami will learn their destination in the NCAA Tournament Monday night at 7 p.m. during the Selection Show on ESPN. The Hurricanes will be watching live from The Rathskeller on the Miami campus and fans are invited to attend.

ABOUT THE WADE TROPHY

The Wade Trophy is presented to the nation’s most outstanding NCAA Division I women’s basketball player each year – one who not only excels athletically, but also serves as a positive role model both on and off the court.  The acclaimed Wade Watch list, from which the Wade Trophy recipient is chosen, consists of players selected on the basis of game and season statistics, leadership, character, overall playing ability and the positive impact on her respective team.

The WBCA will officially announce The Wade Trophy winner during the WBCA National Convention, held in conjunction with the NCAA Women’s Final Four in Indianapolis.

The Wade Trophy, named after the late, legendary head coach Lilly Margaret Wade, a three-time national champion at Delta State University, debuted in 1978 as the first-ever women’s national player of the year award in college basketball.