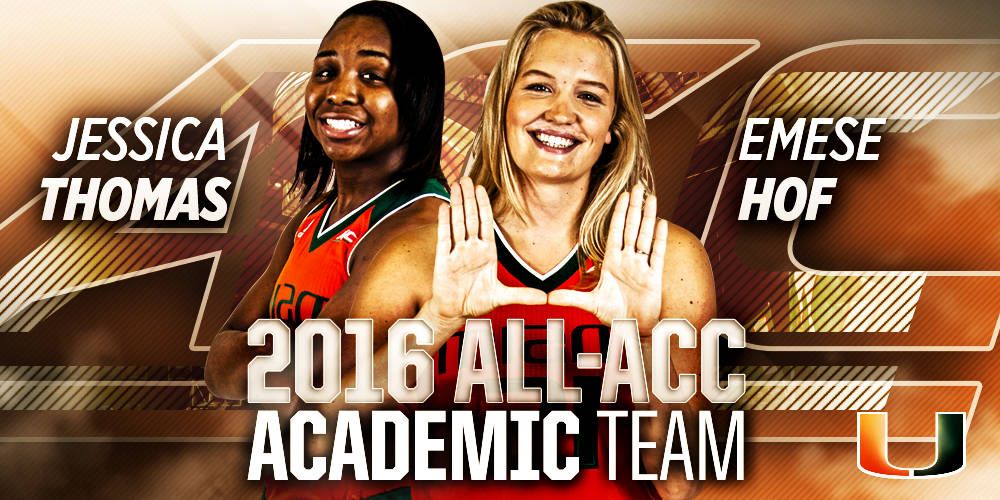 Miami was one of eight schools with multiple selections among the 23 honorees. It is the first time the Hurricanes have had two players make the team in the same season.

“I am really proud of Emese and Jessica,” Miami head coach Katie Meier said. “They are outstanding representatives of the University and are very deserving of this honor.”

A 6-foot-3-inch freshman forward from Utrecht, Netherlands, Hof is averaging 8.1 points and 5.7 rebounds while shooting 52.9 percent from the field. She leads the team in blocks with 34, while her rebounding average and field goal percentage both rank second.

Hof has posted double figures 10 times during her freshman campaign, including scoring 11 points in Miami’s 77-55 victory over Pittsburgh Thursday in the second round of the ACC Tournament.

In her first semester at Miami, Hof posted a 3.740 GPA and was named to the Dean’s List, Athletic Director’s Honor Roll and the Book Buster Honor Roll. She has yet to declare an academic major.

“This is an awesome accomplishment for Emese to receive as a freshman,” Meier said. “She has put up great numbers on the court and also excelled in the classroom.”

A 5-foot-6-inch guard from Gainesville, Fla., Thomas is averaging 11.4 points, second-most on the team, and a team-high 3.6 assists per game. Her 2.06:1 assist/turnover ratio ranks second in the ACC and she leads the Hurricanes in minutes per game at 31.0 an outing.

Thomas, a team co-captain, has scored double-digit points in 20 of 30 games this season and has fewer than nine just six times.

A sport administration major with a minor in communication, Thomas sports a 3.072 GPA and has been named to the Book Buster Honor Roll three times, as well as the Athletic Director’s Honor Roll once.

“Jessica continues to prove to me that she is such a special young woman,” Meier said. “She works so hard and gives tremendous effort in all she does.”

Hof, Thomas and the Hurricanes are set to face No. 14/10 Florida State Friday at 11 a.m. in the quarterfinals of the ACC Tournament. The game will be televised live on RSN from the Greensboro Coliseum in Greensboro, N.C.