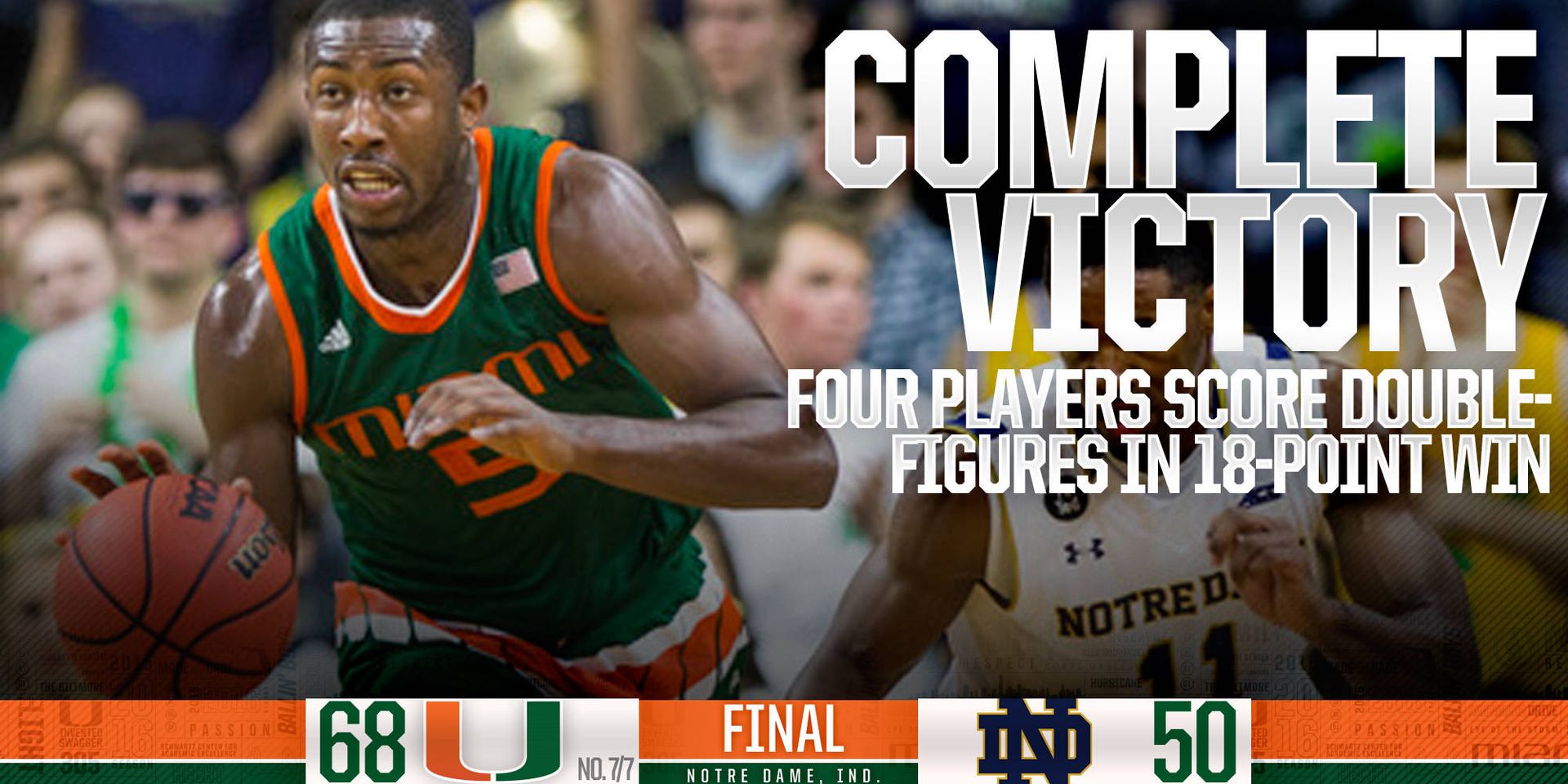 NOTRE DAME, IND. (AP) — Angel Rodriguez matched his season high with 19 points, Sheldon McClellan added 17 and No. 7 Miami jumped to an early 18-point lead and beat Notre Dame 68-50 victory Wednesday night to move back into a tie with North Carolina for first-place in the Atlantic Coast Conference.

The Hurricanes jumped to a 21-3 lead early and never let the Irish get any closer than seven points. The Irish cut to the lead to nine points with 12 minutes to go, but Miami quickly stretched the lead back out to 15. Notre Dame made one last gasp with a 6-0 spurt with to cut the lead to 59-50 with a jumper by V.J. Beachem with 3:03 left. The Hurricanes ended the streak with a 6-0 run of its own, capped by a pair of free throws by Rodriguez.

Tonye Jekiri added 14 points for the Hurricanes and Davon Reed had 10.

The game was more lopsided than their first meeting, when the Hurricanes led by 12 at halftime and by 20 midway through the second half en route to the 79-70 victory. On Wednesday, the Irish made just 1 of their first 10 shots while the Hurricanes made 7 of 10 to jump to a 21-3 lead eight minutes in.

After Tonye Jekiri missed Miami’s opening shot, the Hurricanes made five straight. It started when Rodriguez drove inside on back-to-back possessions for easy layups, then made a bounce pass to McClellan, who turned it into a three-point play when he was fouled by V.J. Beachem. After a layup by Reed, Rex Plueger finally ended Notre Dame’s scoreless streak when he hit a 3-pointer.

The Irish used a 7-0 run to close to 29-22 when Jackson drove inside and the ball bounced twice off the rim before falling in. The Hurricanes ended the half with a 6-0 spurt to lead 35-22 at halftime.

Notre Dame: The Irish lost back-to-back games for the first time since the end of the 2013-14 season. … Auguste has scored 10 or more points in nine straight games. … Notre Dame had seven field goals in the first half and made six free throws. … Senior captain Austin Burgett started for the third time this season. … Football coach Brian Kelly and quarterbacks coach Mike Sanford sat courtside.

Miami is at Virginia Tech on Saturday.

Team Notes
– With the win, Miami improved to 10-10 in the all-time series against Notre Dame, which dates back to the 1985-86 season. Miami also improved to 4-5 on the road at Notre Dame in the all-time series.
– In the last 20 years, Notre Dame has been held to 50-or-less points at home three times (twice by Miami and once by Georgetown) – via AP.
– The Hurricanes’ 18-point win over Notre Dame is Miami’s largest conference win of the season.
– With the win, Miami is now tied with North Carolina for first place in the ACC.
– Miami is just the second team this season to defeat Notre Dame inside Purcell Pavilion. UND entered the game with a 13-1 at home.
– The Hurricanes jumped out to a 12-0 lead and held Notre Dame without a field goal for the first 5:30 of the first half.
– Notre Dame missed its first seven shots of the game.
– Miami has won eight of its last nine games.
– Miami never trailed in tonight’s matchup.
– With the win, Miami improved to 4-4 in ACC road games.
– Miami led Notre Dame 35-22 at the half. The Hurricanes improved to 19-1 when leading at the half.
– The Hurricanes committed just six turnovers on the night. Miami has limited itself to 10-or-fewer turnovers for the 14th time this season.
– With the win, Coach Jim Larrañaga now has a 585-388 overall record in his 32nd season as a head coach. He is 115-54 in his fifth season at the University of Miami, with a 54-33 mark in ACC play.
– Miami held Notre Dame to 26 points below its season average. The Fighting Irish entered tonight’s game averaging 76.9 points per game.
– The Hurricanes also held Notre Dame leading scorer Demetrius Jackson to just seven points. Jackson entered the game, averaging 16.3 points per game.
– Miami held a 39-26 rebounding advantage over Notre Dame.
– The Hurricanes were a perfect 9-for-9 from the free throw line.

Individual Notes
– Redshirt senior guard Angel Rodriguez scored 19 points. Rodriguez’s 19 points are a season-high in ACC play this season. It also tied a season high.
– Rodriguez also had a team-high five assists.
– Junior guard Davon Reed finished in double figures for the 17th time this season. He finished with 10 points.
– Senior center Tonye Jekiri finished just one point shy of tying his ACC career-high as he scored 14 points. He also pulled down nine rebounds.
– With 17 points against Notre Dame, senior guard Sheldon McClellan scored in double-digits for the 17th straight game and for the 26th time this season. The last contest McClellan did not reach double figures was Dec. 29th against Princeton.