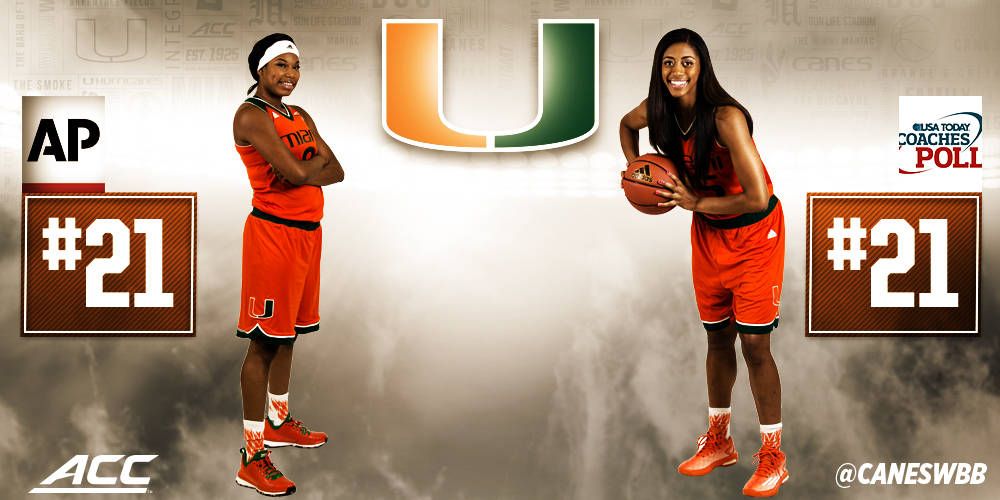 @CanesWBB in Top 25 for Eighth-Straight Week

CORAL GABLES, Fla. – The University of Miami women’s basketball team is ranked among the top 25 teams in the country this week in both The Associated Press Poll and the USA TODAY Coaches Poll.

In Monday’s release of the AP Poll, Miami earned 150 points in the voting and was ranked as high as No. 17 by three voters.

Miami is one of five ACC teams in the top 25 of both major polls, along with No. 2/3 Notre Dame, No. 7/6 Louisville, No. 14/10 Florida State and No. 17/17 Syracuse. Those four teams will receive double byes in this week’s ACC Tournament, while Miami finished just behind them at fifth in the conference and earned a one-round bye.

Head coach Katie Meier‘s team will begin play in the ACC Tournament Thursday at 11 a.m. against the winner of Wednesday’s game between 12th-seeded Pittsburgh and 13th-seeded North Carolina. The action will be broadcast live on RSN from the Greensboro Coliseum in Greensboro, N.C.