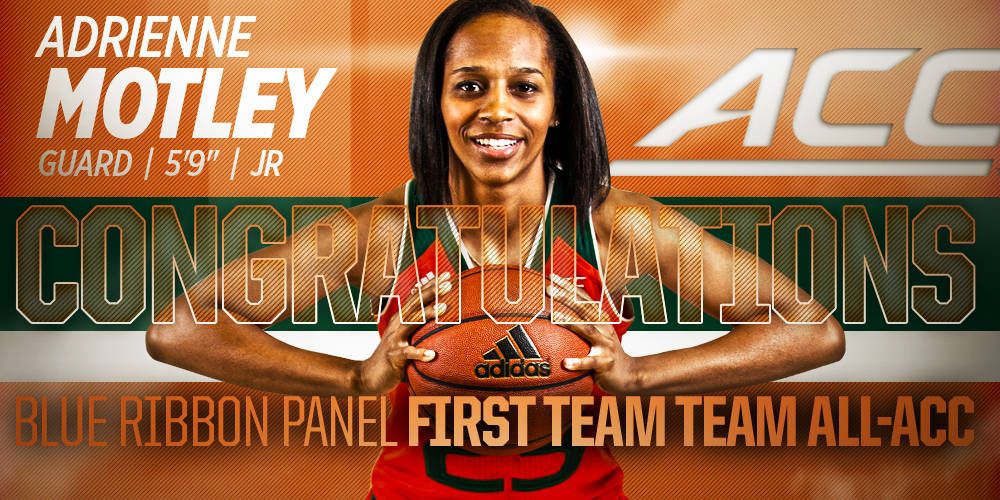 The fifth-leading scorer in the ACC at 15.8 points per game, Motley has posted at least a dozen points in 24 of the Hurricanes’ 29 games, with 17-plus on 17 occasions.

“Once again, Adrienne has proven to be one of the best players in the nation’s top conference,” Miami head coach Katie Meier said. “She has elevated this program every year she has been at Miami and has constantly pushed her teammates to improve their games as well. We are all so excited for her to be recognized, as she is such a humble young lady who only celebrates team awards.”

Motley is the seventh player in the program’s 44-year history to earn first team all-conference honors in consecutive seasons. She is the fourth Hurricane to do so in Miami’s 12 years in the ACC, joining all-time greats Tamara James, Shenise Johnson and Riquna Williams.

Motley has led or co-led the Hurricanes in scoring 17 times this season and is tied for fourth in the ACC with eight outings of at least 20 points. She was selected to both the Naismith Trophy Early Season Watch List and The Dawn Staley Award Mid-Season Watch List.

With the regular season complete, Motley and the Hurricanes begin play at the ACC Tournament Thursday after a first round bye. Miami will face either No. 12-seed Pittsburgh or No. 13-seed North Carolina at 11 a.m. at the Greensboro Coliseum in Greensboro, N.C., with the game televised on RSN.