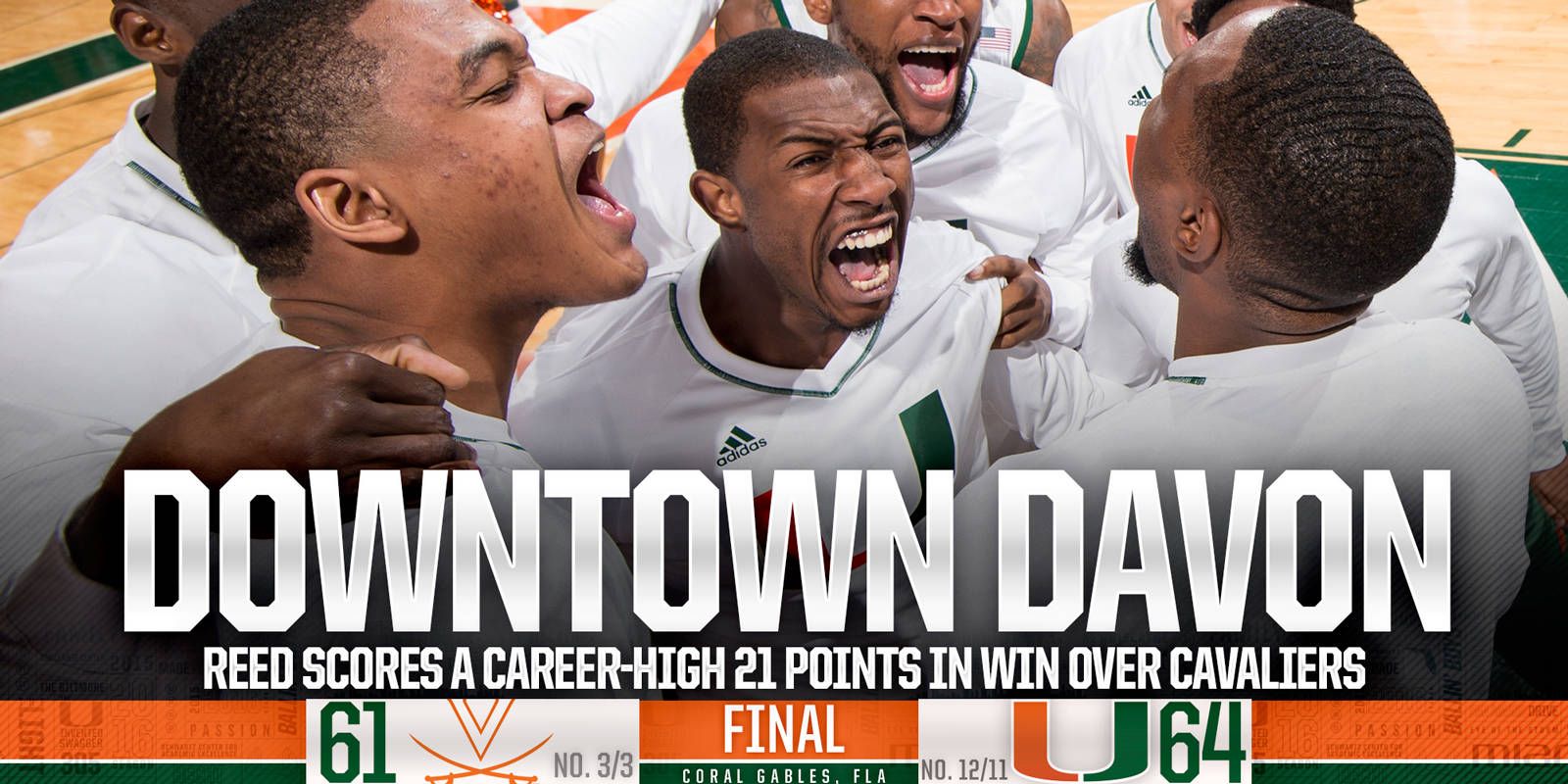 London Perrantes’ game-tying attempt from 40 feet at the buzzer bounced off the backboard for Virginia.

Virginia rallied from an eight-point deficit with seven straight points behind Malcolm Brogdon’s jumper and 3-pointer and Perrantes’ layup with 1:22 remaining that got the Cavaliers within 60-59.

Tonye Jekiri converted one of two free throws with 36 seconds left to make it 61-59. Brogdon’s 3-point attempt with 23 seconds left bounced off the rim.

Brogdon scored 28 points and was the only double-figure scorer for the Cavaliers.

The Cavaliers overcame a 10-point deficit early in the second half and outscored Miami 19-8 over a 7:16 stretch. Brogdon hit three jumpers during the spurt and Mike Tobey’s layup with 9:36 left gave Virginia its first lead, 48-47, since 5:29 remaining in the first half.

Reed hit consecutive 3-pointers early in the second half as Miami increased a five-point halftime lead to 39-29.

Virginia’s Isaiah Wilkins took a knee to the head with 4:51 remaining in the second half and stayed on the court while treated by the training staff. A dazed Wilkins eventually reached his feet and was escorted to the bench.

Miami: The Hurricanes snapped a three-game losing streak against the Cavaliers

Virginia: Brogdon made his first eight shots of the second half before his late miss.

Miami hosts No. 11 Louisville on Saturday.

Team Notes
– With the win, the Hurricanes captured their fourth win over a ranked team this season. Miami is 4-2 this season against ranked opponents.
– Miami captured its sixth win in the last seven games.
– Miami improved to 11-8 in the all-time series against Virginia, which dates back to the 1965-66 season. The Canes are 7-1 at home against the Cavaliers.
– Miami improved to 14-1 in home games this season.
– The Hurricanes’ win over Virginia snapped Miami’s three-game losing streak to the Cavaliers.
– The Hurricanes committed just nine turnovers on the night. Miami has limited itself to 10-or-fewer turnovers for the 12th time this season.
– Miami held a 30-25 lead at the half. Virginia has only trailed eight times at the half this season.
– With the win, Coach Jim Larrañaga now has a 583-388 overall record in his 32nd season as a head coach. He is 113-54 in his fifth season at the University of Miami, with a 52-33 mark in ACC play.
– Sheldon McClellan, Davon Reed, Ja’Quan Newton, Kamari Murphy and Tonye Jekiri started the game for the Hurricanes. The Canes improved to 16-3 with this starting five.

Individual Notes
– Junior guard Davon Reed posted a career high 21 points. He also tied a career-high with five 3-point field goals.
– Reed finished in double figures for the 15th time this season.
– With 11 points against the Cavaliers, senior guard Sheldon McClellan had double-digit points for the 15th straight game and for the 24th time this season. The last contest McClellan did not reach double figures was Dec. 29th against Princeton.
– Redshirt junior forward Kamari Murphy pulled down a season-best 11 rebounds.
– Redshirt senior guard Angel Rodriguez tallied two steals to lead the way for the Hurricanes. Rodriguez has two-or-more steals in 10 games this season.
– Senior center Tonye Jekiri dished out a season-high five assists.

On his team’s performance against Miami, and the general performance…

“I thought we fought to get back in the game, and we had our chances. I thought we left some points on the board with some finishes, we were right there. I thought we had a couple chances, but their guys made some big shots. I think Malcolm [Brogdon] had a terrific second half. With that play where we were down two [points], we said, ‘if you get a clean look, take it.’ If not, maybe we wanted to attack, maybe we could have gotten a better shot, but he was really feeling it. They made some plays too. We were scrambling a little bit with our matchups defensively when Isaiah [Wilkins] wasn’t in there, so hopefully he’ll be okay.

“But again, we fought hard in the second half, got on the offensive glass, played pretty spirited. I thought in the first half, we were on the edge with our transition defense – we were on our heels, and they were really attacking. Credit to them, they played on Saturday and got beat handedly, and they really fought hard in this game and battled in a good environment.”

On the layup by London Perrantes with less than 10 seconds left, and Miami’s defense on the play…
“We didn’t have a timeout, we [had already] used it. If he could have gotten a three, we were trying to get back, and they did a good job defensively and got in there. We scored, we had a chance to run a play at the end and they ended that pretty well with 3.7 seconds. We were running an action to get a three, we had a couple option to get some threes, and then when they took it away, our spacing got off and it was more about him having to make a play. Could have spaced and got one off, but it still gave us a chance.”

On the status of Isaiah Wilkins, who left the game with an injury…
“He got hit in the back of the head. I think they threw a loop, and [Tonye] Jekiri, I think the back of his knee it looked like, got hit. He had a headache. I don’t know. Hopefully he’ll be okay, because we need his defensive prowess and he’s been playing well for us.”

On Miami’s resiliency, to bounce back from Saturday’s loss against North Carolina…
“You knew, when you get beat like they did, they were going to be awake. They were going to be ready. I’m sure Coach had their attention. They ran into a buzzsaw down there in Carolina. Carolina came off a hard loss [against Duke]. They were going to come ready, and we knew that. The way the schedule is, I know that’s talked about a lot- we didn’t play, we had six or seven days to prepare, they had one – that’s not balanced, but they did a good job.

“We fought, played pretty hard, had chances, but didn’t get it done. We left too many out there. They’re resilient young men, they’re a well-coached team, made it hard for us. In the second half we got it going a little bit. But we’re two teams that were fighting and that’s what it’s all about, to be in their spot late in the conference race.”

“We were very excited about tonight’s game. I told the team on Sunday that everybody gets knocked down. Nobody goes through life without getting knocked down. It’s how you respond to it. We got knocked down big time on Saturday, and you have to get back up and fight to show what you’re made of. I thought we did that tonight against an outstanding Virginia team, ranked third in the country and their high ranking is well-deserved. They’re so highly disciplined, Malcolm Brogdon showed what a great player he is, I thought our players showed what kind of winners they are by bouncing back and winning a hard- fought contest.”

On if the win is more impressive considering the short turnaround time…
“Every game counts as one. I don’t care. If we win, that’s a big win. There are no such things as unimportant games. Every game is important. They have equal importance in the standings. We’re battling Virginia, Duke, Louisville, Notre Dame – there are just so many schools right there with us. Then there’s Carolina, right in front of us. Carolina has to go to Virginia on Saturday. That’s a big game. But we have Louisville coming in here, that’s another top-20 team, and in KenPom [efficiency rankings], they’re even better than that. They’re in the top 10. We have great respect for that program. We’re going to need to get ready for this. Every game now is hugely important.”

On the performance of junior Davon Reed, who set a career high with 21 points…
“As good as Malcolm Brogdon was, Davon was sensational as well. You dream about playing in these games as a college player. Davon is such a terrific competitor. He is such a great leader. He’s mentally tough. He’s very intelligent and he’s very skilled. He used a lot of his skills tonight. What I liked so much about his game tonight is he looked very much calm. I thought on Saturday our team looked very anxious – anxious to do well, more than cool, calm and collected. Tonight I thought we were very calm. We shared the ball really well. We found the open man. When we did, it started right away with beautiful passing that led to a Davon Reed. He buried it. It didn’t even touch net. That kind of shooting, he ends up the game with 21 points, 5-of-6 from three on only eight shots. That’s efficient.”

On the play of senior Sheldon McClellan and sophomore Ja’Quan Newton, who were hurt Saturday…
“We’ve been beat up a little bit lately. Sheldon has been nursing a sprained ankle, and Davon came to me and said, ‘let me take [Malcolm] Brogdon’ and I asked Sheldon, and he said ‘yeah, I need to get my ankle loose before I can move as quick as you have to move to guard a guy like Malcolm Brogdon.’ The two of them together are terrific wing players. They have the same responsibility. They both have to guard the two and the three – the wing player for the opponent – they both have to rebound would rebound more, because that’s such an area of emphasis for us now. One of them had three, the other had two – they should have had that in the first half alone.”

“But they know for us to play and finish our defensive effort, it has to end with a rebound. Virginia only had seven turnovers, we only had nine, so it was a well-played game. On the offensive end, we had 13 assists to their 10. In a slower paced game, 13 assists is pretty darn good.”

On if he was surprised when Malcolm Brogdon shot his late three-pointer with Virginia down two…
“Not really. With the day he was having, I would have shot it too. I wasn’t surprised that he shot it, but he had a great game. He wasn’t missing. Hats off to him, but we got the win. That’s more important. I’m not surprised at how he shot it.”

On if the win was even more impressive considering the short turnaround time after UNC loss…
“It was definitely an impressive win for us. Any time you win in the ACC, no matter who it’s against, it’s always a great win. The way we lost to Carolina, we felt kind of embarrassed, and we wanted to come back and respond the way we did tonight, whether we on by a lot or won by a little. And that’s what we did tonight.”

On his career-high 21 points, and what was working offensively…
“Saturday was a tough game for us. I told the guys from the beginning, we need to come out and be the aggressors. It just happened to be that night for me. Shots were falling, my teammates were giving me the ball. All the credit to them.”

On if the follow-up from the loss to North Carolina was more mental or if it was schematic…
“I think amongst the captains, and it trickles down, is that we said we can’t feel sorry for ourselves. That game hurt, but it’s in the past, we have to put it behind us. We still have a chance to win the league and we have to win out from here. We need to be aggressive from start to finish tonight, and we were.”

On the past 48 hours leading into Monday’s game…
“I don’t think anybody was feeling sorry for ourselves. We came in, we had a really focused practice yesterday, shootaround was focused today…we knew what was at stake, and I think we responded.”