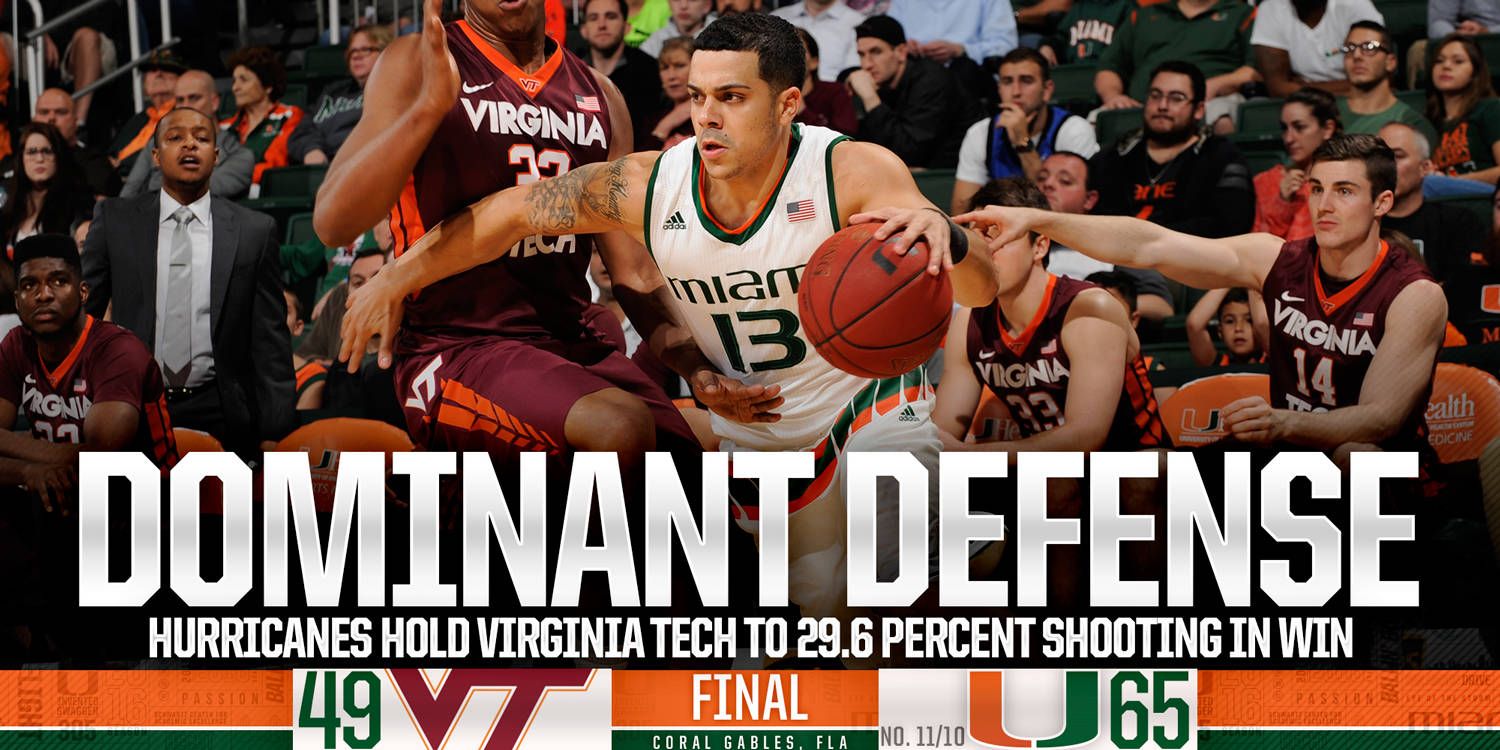 A 14-2 surge to start the second half put the Hurricanes ahead 35-24. Virginia Tech went without a field goal for the first seven minutes of the half and finished 16 for 54.

Angel Rodriguez scored 14 points for the Hurricanes (21-4, 10-3 Atlantic Coast Conference), who will take a five-game winning streak into its toughest stretch of the season. Miami plays four consecutive games against ranked teams beginning Saturday at No. 5 North Carolina.

Virginia Tech (13-13, 5-8) lost to Miami for the fifth time in a row. For the second game in a row, the Hokies had their worst shooting game of the season.

Their point total tied a season low. They were outscored 44-27 in the second half.

Sheldon McClellan, Miami’s leading scorer this season, played only 24 minutes because of foul trouble. His first field goal came more than three minutes into the second half, and he finished with 11 points.

Hurricanes reserve guard Ja’Quan Newton missed the game because of an unspecified medical condition. He was under the care of team doctors, a school official said.

Miami shot 30 percent in the first half but trailed only 22-21 because Tech shot 29 percent. The Hurricanes scored on the first shot of the second half to take the lead for good.

The sedate atmosphere may have contributed to their lackluster early play. Although Miami’s home games are sold out for the season, the 8,000-seat arena was only half-full.

Miami improved to 7-0 at home in the ACC.

Miami: at North Carolina on Saturday.

Team Notes
-With its 65-49 win over Virginia Tech, Miami improved to 21-4 overall and 10-3 in ACC play. The victory stretched the Hurricanes’ winning streak to five-consecutive games.

-Miami and North Carolina will play for the outright lead for first place in the ACC on Saturday afternoon in Chapel Hill.

-The win also gave the Hurricanes their fifth straight win over Virginia Tech. Miami has not lost at home to Virginia Tech since Dec. 8, 2013.

-The Hurricanes tied a season high with seven blocks.

-Miami trailed 22-21 at the half. The Hurricanes have only trailed seven times at the half this season. Miami improved to 4-3 when trailing at the half.

-The Hurricanes posted a 12-2 run over the first five minutes of the second half to open up a 33-24 advantage.

-Miami outscored Virginia Tech 44-27 in the second half.

-The Hurricanes held Virginia Tech leading scorers Zach LeDay (15.6 points per game) and Seth Allen (14.0) to a combined 11 points on a combined 3-of-15 shooting.

Individual Notes
-Hurricanes senior Angel Rodriguez scored a game-high 14 points and posted a team-high four assists. He has dished out four-or-more assists in each of the past seven games.

-Rodriguez posted a team-high with three steals. He has tallied three-or-more steals in seven games this season.

-Junior Kamari Murphy pulled down 10 rebounds, which marked a new career high in an ACC game. His previous career high was nine, which he set this past Sunday at Florida State.

-Senior Tonye Jekiri finished with 11 points, which marked the sixth time this season he has scored in double figures.

-Freshman Ebuka Izundu saw time for the third straight game after not playing in the previous six games.

-Sophomore Ja’Quan Newton missed the game due to a medical condition. He is under the care of Miami’s doctors.

On if he was aware that Miami is in a tie for first place in the ACC with North Carolina…
“I was just informed. That’s great news, but we have to take care of business Saturday. We’ve been looking forward to playing [North Carolina]. We had a couple of blessings, they took a couple of losses, so this is the matchup. We just have to come in there, be focused and execute.”

On what Virginia Tech did in the first half defensively to stymy Miami’s offense…
“It was just a weird game. Virginia Tech and Buzz Williams, they’re a different style, scrappy. It was just tough to get in a flow on offense. But in the second half the defense created offense for us.”

On what the difference was for the Hurricanes in the second half, when they shot 17-for-25…
“It was a lot of defense, but we also took smarter shots. We didn’t settle for threes. Coach [Larrañaga] emphasized that at the half. I think that led to us being more efficient.”

About finding ways to win over the last three games…
“I think it starts with our coaching staff and their game plan, and [second], our veteran guys keeping the team together in late situations. Just having the will not to lose…we know what we’re chasing. We want to win it. So in late-game situations, we all lock in and get the job done.”

On the absence of sophomore guard Ja’Quan Newton…
“He’ll be fine. He’ll be back with us shortly. We knew with him being out, certain guys had to step up – like James Palmer. I stepped up on the defensive glass and other guys [too]. We all just played our game. With a guy like that being out, that can score like that, you have to find and do it in different places. I think everybody realized that, and we got it done tonight.”

On staying focused with a challenging slate over the next five games..
“Thankfully we have some of them at home. I think we’ve been protecting home court very well. We’re just taking it game by game. We can’t think about the next game after this one, or the game after that. We have to take it one game at a time, execute the game plan and get the wins.”

Opening Statement…
“I’m very, very pleased with the win, especially considering in the first half we didn’t execute the plan that we had in mind. We started out the game 0-for-5 from three in the first five minutes. We had told the team that we were going to be able to get threes, but if we settle for threes and didn’t get the ball into the paint, that that was to their advantage…that we needed to get to the foul line and we needed to put the ball inside. We didn’t do that early, and we didn’t do it throughout the first half very well.

“However in the second half, we immediately did it and were able to get control of the game and gain a lead that we never relinquished. I think a lot of credit goes to the team defense. I thought Tonye [Jekiri] did a great job closing up some holes. I’ve told you, I think he’s the best post defender, team defender in the league. What was great tonight was that he had help from Kamari [Murphy] rebounding. While Tonye was out there helping guys get over ball screens, Kamari was on the glass rebounding. On offense, we put the ball in the paint continuously. We had 34 points in the paint, I don’t know how many we had in the first half. We played very well in the second half on both ends of the court.”

On what Virginia Tech did in the first half to prevent Miami’s offense from gaining momentum…
“I thought we just settled. Actually James Palmer came in and drove, which was what we wanted. They’re very good at taking charges, so you have to be very careful when you drive that you’re not out of control. We did a much better job in the second half of getting into the seams of the defense. We only took five threes the whole second half and made three of them. That’s good selection – rather than take five to begin with and go 0-for-5.”

On how Ja’Quan Newton’s absence affected the team…
“One of the things that we did tonight is we just let Angel [Rodriguez] play the whole game. He played 39 minutes. Angel probably thinks it’s a good idea [laughter]. But we did miss Ja’Quan, because he is such an attacking player. With this defense that Virginia Tech played, you need guys who can attack the rim. That’s what James Palmer did in the second half. Tonye did it, you saw Tonye getting the ball inside, go to work. He scored double-figure points. That was good.”

On how long he anticipates Ja’Quan Newton being out…
“I don’t know. I think we’ll know more tomorrow. He’s talked to the doctors, and doctors are just trying to figure it out. I don’t have my medical degree, so you’ll have to wait until we hear from the doctors tomorrow.”

On how much fun Saturday’s game against North Carolina will be…
“I think every game is exciting. I think Carolina is a unique place, because of their history and tradition. The Dean Dome is special…23,000 fans there. Everybody is wearing powder blue, and it’s like a sea of Carolina blue. I think our players will look forward to that, but they better be looking forward to playing Carolina, Virginia, Louisville, Notre Dame and Virginia Tech again, because we have five huge games ahead of us. We now have two at home and three on the road. It’s a very, very challenging schedule. These next three games are against three of the top-10 teams in the country, according to KenPom – meaning they’re very efficient offensively and defensively.”

On what Virginia Tech did in the first half defensively…
“I thought we kept them out of the paint okay. I don’t think we got completely demolished on the glass. I thought our effort defensively in the first half was good. Obviously [it was] diametrically opposed to that in the second half, for sure.”

On what Miami did differently in the second half to find success offensively…
“I thought they were better on the glass. Obviously there weren’t as many balls on the glass when they shot 70 percent. We couldn’t guard them. No matter what we tried, we couldn’t. We couldn’t keep them out of the paint off penetration or off the pass.”

On what Virginia Tech did offensively, and facing tough defenses in recent games…
“I always want to give credit to the opponent. I thought they were good. We didn’t make shots either half. 25 percent of the time we turned the ball over – that’s really hard to overcome anywhere, but particularly on the road.”

On the biggest difference he notices from this Miami team compared to last year’s team…
“You probably could make a better ascertainment of that. I know [Ja’Quan] Newton didn’t play. I think he’s a really good player. Obviously they’re very experienced – more experienced would be one quality. Maybe more refined niches in what they’re doing, because of that experience. I know that statistically maybe [Kamari] Murphy doesn’t look really important, but I think he is really important. That would be what I’d say [is different], without Newton playing.”