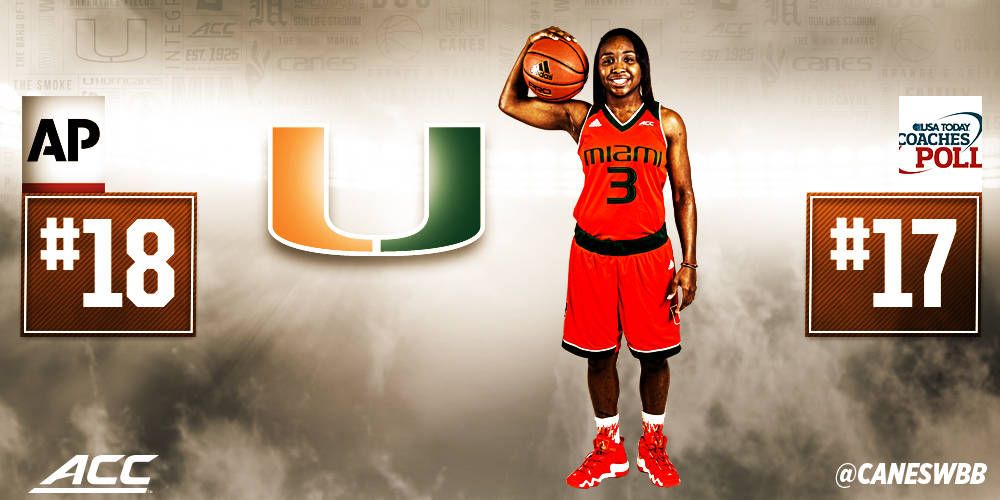 CORAL GABLES, Fla. – The University of Miami women’s basketball team is ranked No. 18 in this week’s The Associated Press Poll and No. 17 in the USA TODAY Coaches Poll.

After a 1-1 week that included a road win at Georgia Tech and a defeat on the road at No. 3/3 Notre Dame—now ranked No. 2/3—the Hurricanes moved up one spot in the AP Poll released Monday. Miami was voted as high as No. 15, garnering a pair of votes in that position.

In the Coaches Poll released Tuesday, the Hurricanes held steady at No. 17, but did receive 16 additional points in the balloting compared to last week.

Miami joins No. 2/3 Notre Dame, No. 10/9 Florida State, No. 11/11 Louisville and No. 23/18 Syracuse as ACC teams ranked in the top 25 of both major polls. The Hurricanes, Fighting Irish and Seminoles are all among the 20 Division I teams with at least 21 victories this season.

Head coach Katie Meier‘s team will be back on the court Sunday afternoon at 4 p.m. when it hosts Virginia Tech in its Play 4 Kay game at the BankUnited Center in Coral Gables.