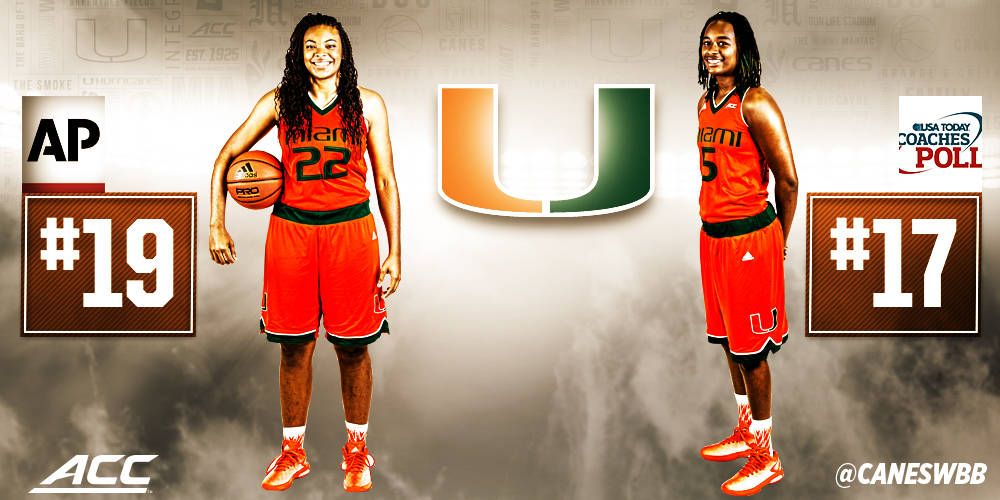 CORAL GABLES, Fla. – For the fourth-consecutive week, the University of Miami women’s basketball team is ranked top-20 in both The Associated Press Poll and the USA TODAY Coaches Poll.

The Hurricanes checked in at No. 19 in the AP Poll released Monday and earned the No. 17 spot in the Coaches Poll released Tuesday.

Miami moved up three spots in the Coaches Poll, rising from No. 20 and picking up an additional 55 points in the voting. This is the fifth week in a row Miami has been ranked in the top 20 of the Coaches Poll.

The Hurricanes are currently tied for fourth place in the ACC and are one of four teams in the conference in the top 25 of both major polls. The others are No. 3/3 Notre Dame, No. 10/9 Florida State and No. 12/12 Louisville.

Miami is one of just 14 Division I teams to already have 20 victories and ranks No. 19 in winning percentage (.833). This is the sixth time in the past seven seasons head coach Katie Meier has directed the Hurricanes to at least 20 wins, and 24 games ties the fifth-fastest Miami has ever achieved the number.

The Hurricanes will be back in action Thursday night at Hank McCamish Pavilion in Atlanta when they take on Georgia Tech at 7 p.m.