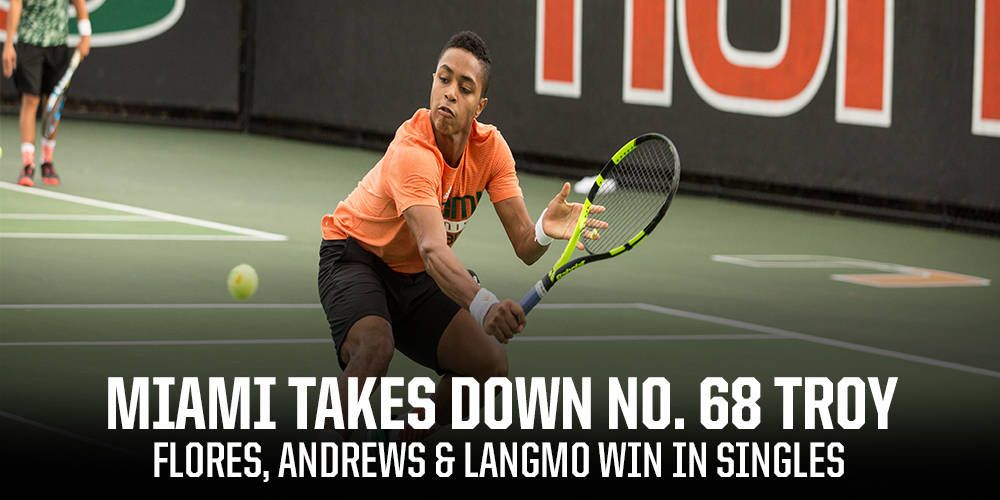 CORAL GABLES, Fla. – The Miami Hurricanes men’s tennis team defeated No. 68 Troy University Sunday afternoon at the Neil Schiff Tennis Center. The win was the Hurricanes’ second of the weekend, as they previously defeated UCF 5-2 on Friday.

“It was fantastic for our team, two very complete matches of three doubles and six singles,” assistant coach Mark Dickson said. “It was complete matches all the way throughout. Players were keeping their composure, dictating play, having fun out there and really representing the University of Miami.”

The dual match began with doubles action, where Miami played consistently strong. Sophomore Piotr Lomacki and sophomore Nile Clark teamed up and defeated Pablo Moreno and Filip Mansson 6-3. At the No. 1 position, sophomore Christian Langmo and junior Jesse Flores took down Andre Baldo and Fransisco Yim Kim, 6-3, which clinched the doubles point for the Hurricanes.

Max Andrews and Kevin Bondar were tied 4-4 against Mustapha Belcora and Andy Lau when the match was called.

In singles action, Miami faced some tough obstacles against Troy, but emerged triumphant.

It came down to a competitive three-set showdown against No. 70 Langmo and Andy Lau. Langmo successfully clinched the win for Miami, defeating Lau, 4-6, 6-1, 6-3.

“He has really stuck with his game plan, he’s been extremely coachable and receptive to coaching,” Dickson said. “I think that that’s helping his game to evolve and to develop so that when he gets into these real tough matches he has multiple ways of being successful.”

The Canes are now 3-3 and will return to action on Feb. 15 as they take on the Army at the Neil Schiff Tennis Center at 10 a.m.