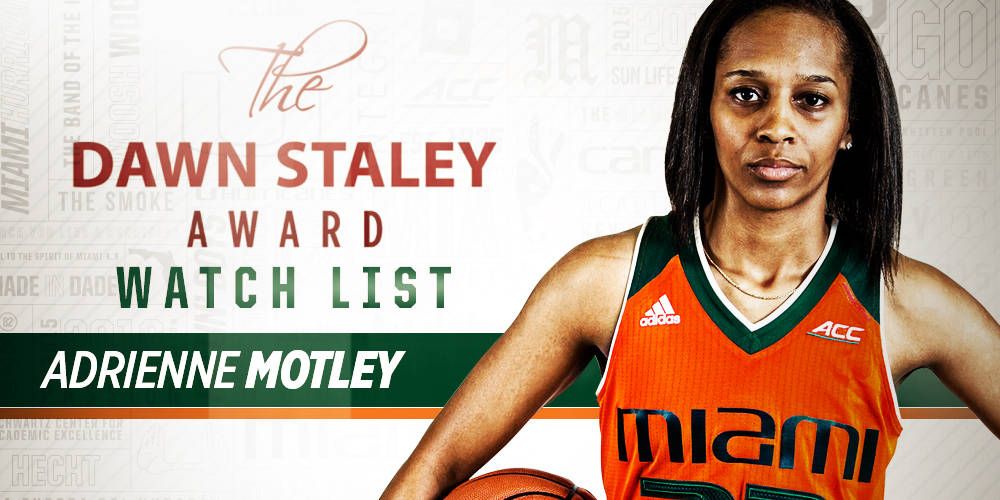 Motley is one of 18 players in the nation on the list for the honor, which recognizes the best guard in the nation. She is one of three ACC players among the group, along with Notre Dame’s Madison Cable and Syracuse’s Alexis Peterson.

A native of Newport News, Va., Motley is also on the Naismith Trophy Women’s College Player of the Year Early Season Watch List. A 2015 First Team All-ACC selection, Motley ranks fourth in the ACC in scoring at 16.4 points per game.

Motley has recorded over a dozen points in 16 of the Hurricanes’ 20 games this year, with 17-plus 14 times. A Preseason All-ACC selection this year, the 5-foot-9-inch Motley has helped Miami race out to a 17-3 (5-2 ACC) mark to open the 2015-16 season, tied for the third-best start in program history.

The Hurricanes are back in action Friday night at 7 p.m. when they face Virginia Tech at Cassell Coliseum in Blacksburg, Va.

ABOUT THE DAWN STALEY AWARD

The Dawn Staley Award is given to the most outstanding collegiate guard in the country; a player who exemplifies the skills that Dawn possessed during her career (ball handling, scoring, her ability to distribute the basketball and her will to win). The Award will be announced during Final Four weekend and the award ceremony will be held in April, 2016 at the Union League of Philadelphia.