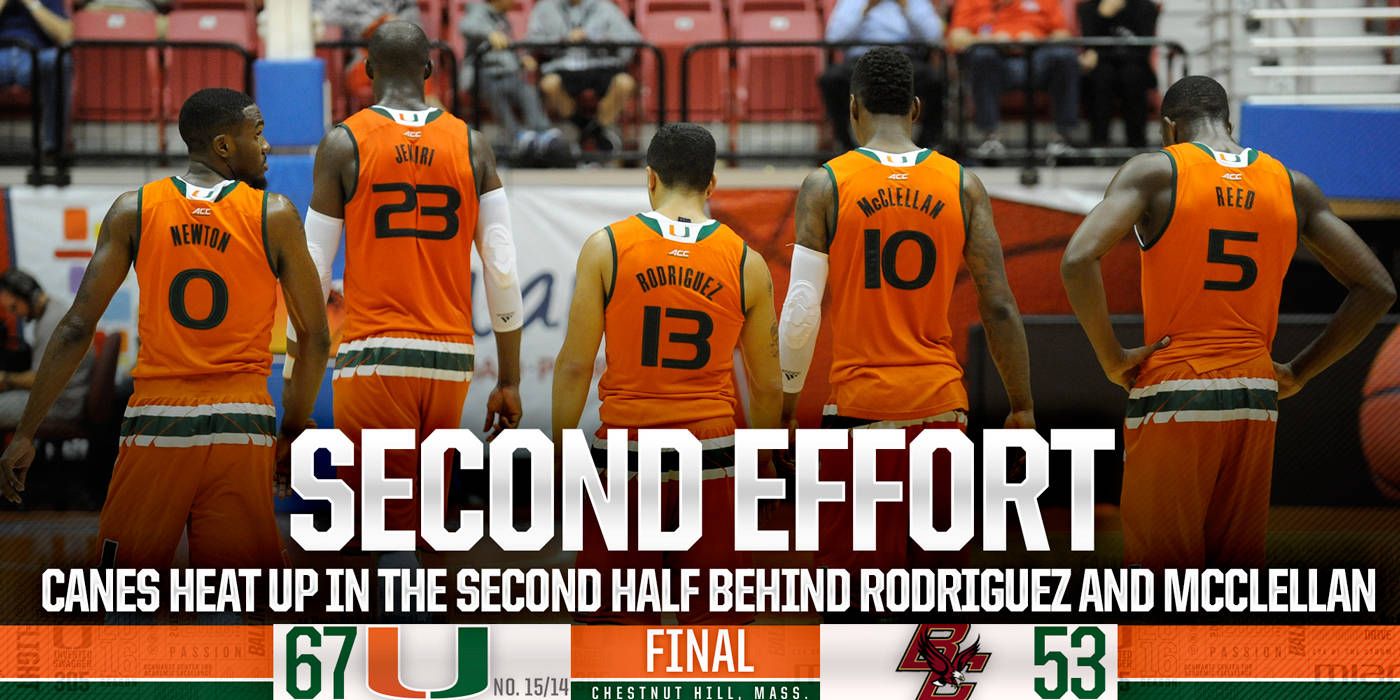 It was the 11th straight victory for the Hurricanes (14-3, 3-2 Atlantic Coast Conference) against Boston College. Tonye Jekiri matched his career high with 17 rebounds, and Angel Rodriguez scored 12 points.

It was BC’s fifth straight loss. The previous four — all in conference games — were by an average of 22.5 points.

Closing a stretch of three road games in nine days, Miami rode a solid start in the second half by Rodriguez, who scored nine points to help the Hurricanes open a 45-35 lead with 14:15 to play.

BC sliced it to 45-41 on Darryl Hicks’ 3-pointer from the right corner with just more than 14 minutes to play.

Miami, which seemed to be relaxing on the defensive end of the floor on many possessions early in the second half, pushed its lead to 56-49 on Newton’s baseline jumper with 5:45 to go.

The Eagles never trimmed their deficit below five points the rest of the way. They didn’t have a basket in the final 7 minutes.

In the first half, the Hurricanes pounded the ball inside early and took advantage of nine BC turnovers in the opening 11 minutes to build a six-point edge before the Eagles answered with a 10-1 spree.

Miami closed the half by scoring eight of the final 12 points to grab a 29-28 advantage at halftime.

Neither team was crisp offensively in the opening 20 minutes, at times turning the ball over on consecutive possessions.

“First of all, I am very happy and I think we are very fortunate to have won this game tonight. We had ample opportunities to play very well to start the game. At halftime, there were 12 turnovers by Boston College and we only ended up with nine points. We should have ended up with maybe 20 points off of those turnovers. 10‐for‐12 because they were basically fast breaks that you know when we can finish at a high level, especially this team, who is pretty good in the open court. When we didn’t do it, I was very concerned at halftime that it was a one‐point game. Angel (Rodriguez) and Sheldon (McClellan) did their job. They led us in the second half. Tonye (Jekiri) did his job and got 17 rebounds. This is probably the largest margin of victory we have had since I’ve been in the ACC. We’re happy to end up with a 14‐point win.”

-Miami improved to 22-24 overall in the all-time series against Boston College. The Hurricanes also moved to 10-11 on the road against the Eagles.

-The Hurricanes have now won 11-straight matchups against BC and 14 of the last 16.

-With the win over Boston College, Miami snapped its two-game losing streak.

-Miami’s starting lineup of Angel Rodriguez, Sheldon McClellan, Davon Reed, Ivan Cruz Uceda and Tonye Jekiri made their seventh appearance of the season. Miami improved to 6-1 on the year with this lineup to open a game.

-Sheldon McClellan finished the game with a team-best 19 points, connecting on 7-of-14 shots from the field.

-Teammates Angel Rodriguez and Ja’Quan Newton also scored in double figures as they each scored 12 points.

-McClellan logged a team-high 37 minutes. McClellan has played 32-or-more minutes in each of the past five games.

-Tonye Jekiri pulled down a game-high 17 rebounds, which tied a career high. Jekiri has tallied 10-or-more rebounds in 11 games this season.

-With his 17 rebounds against Boston College, Jekiri became just the sixth player to record 17-or-more rebounds in ACC play this season.

-Reed has hit three-or-more free throws in every game but five (vs. Utah, Florida, Syracuse, Virginia and Clemson).

-McClellan also has a steal in every game but two (vs. Charlotte and Princeton). McClellan finished the game with three steals, which tied a career high in ACC play.

-Rodriguez has knocked down a 3-pointer in every game but five (La Salle, Syracuse, Florida State, Clemson and Boston College).

Canes as a Ranked team

-Since the rebirth, Miami is 70-32 overall as a ranked team.

-The Canes are a perfect 9-0 against Boston College under Coach L.

-Miami is 29-11 overall while ranked under Coach L.