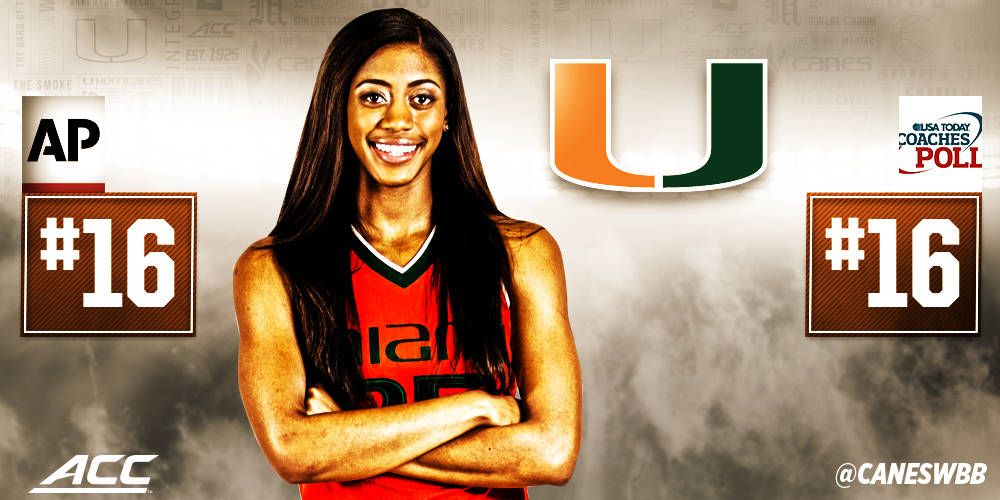 @CanesWBB Rises to No. 16 in the Nation

CORAL GABLES, Fla. – The University of Miami women’s basketball team reached its highest ranking of the season, No. 16, in both The Associated Press Poll and the USA TODAY Coaches Poll this week.

The Hurricanes moved up five places in the AP Poll and four positions in the Coaches Poll, both the second-highest jumps on each list. It is the first time Miami (17-2, 5-1 ACC) has been in the top 20 of both polls since the final polls of the 2011-12 season.

Miami more than doubled its points total in both polls, going from 121 in the AP Poll and 150 in the Coaches Poll last week to 267 and 318, respectively, this week.

Over the past two weeks, during which the Hurricanes are 4-0, they have risen 12 spots in the AP Poll and added 224 points, while moving up 11 places in the Coaches Poll and picking up 256 points.

In the AP Poll, released Monday, Miami received six top-15 votes and appeared as high as No. 10 in the balloting. The Hurricanes were one of just 14 teams in the country to garner a top-10 vote.

Miami, one of four ACC schools ranked nationally in both major polls, is tied for second in Division I in victories, as well as tied for eighth in winning percentage at .895.

Head coach Katie Meier’s team returns to the court Sunday at 1 p.m. when it hosts No. 14/13 Florida State at the BankUnited Center in a matchup of two top-20 teams.