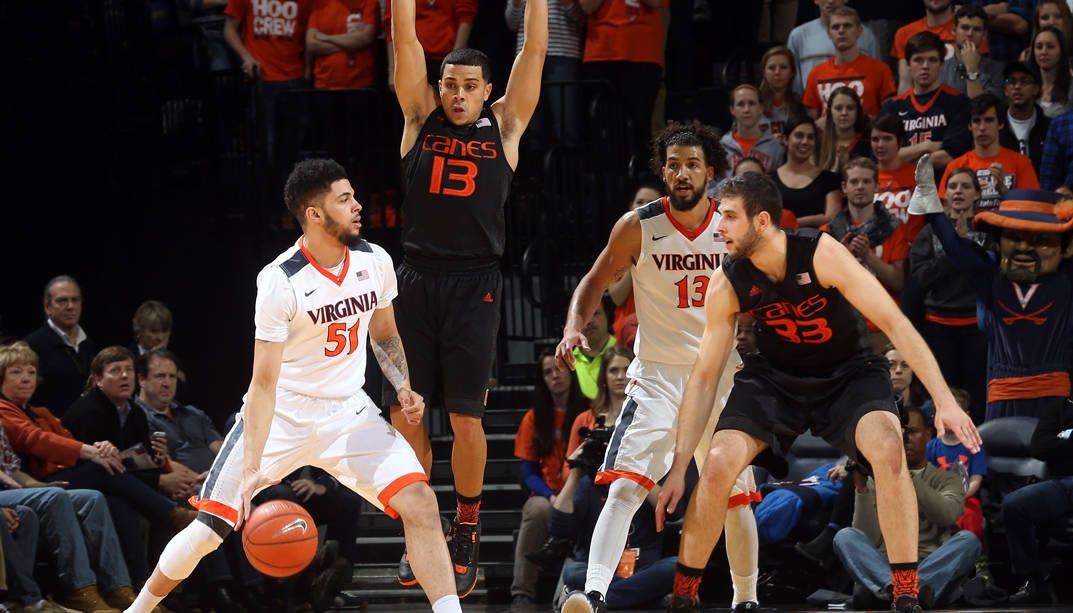 CHARLOTTESVILLE, Va. (Miami Herald)–  In an intense Atlantic Coast Conference early-season heavyweight battle, 13th-ranked Virginia remained perfect at home and handed No. 8 Miami its first conference loss of the season and snapped the Hurricanes’ seven-game win streak with a 66-58 on Tuesday night.

UM (13-2, 2-1) got within three points with under two minutes to play, but Virginia (13-3, 2-2) made crucial free throws down the stretch and closed the contest strong, highlighted by a London Perrantes runner with 1:05 left.

Miami guard Angel Rodriguez led the Hurricanes with 17 points, 11 of those coming in the second half. Fellow senior and Canes’ leading scorer Sheldon McClellan added 13 points, while Davon Reed finished with 11.

“I told the team before the game that this is a game of who could execute better, especially down the stretch,” said Miami coach Jim Larrañaga, “and unfortunately for us, it was [Virginia]. They got to the foul line way too often in the second half — we did not get to the foul line, and when we did, we didn’t make the free throws.

“[The Cavaliers] deserve the credit, they made their free throws and they got the offensive rebounds and outrebounded us by eight and that was the difference in the game.”

Miami trailed by four at halftime, but used a 7-0 spurt to begin the second half as McClellan came away with a steal and an easy flush on the other end. The teams then went blow-for-blow as the lead changed hands 11 times over the following six minutes until the Cavs took the lead for good.

Virginia’s Darius Thompson caught an alley-oop from Malcolm Brogdon to ignite the crowd with just over four minutes to go before a Miami travel gave the ball back. But the Canes scored a pair of quick buckets — one by Tonye Jekiri, one by Rodriguez — to make it a 59-56 ballgame with 2:20 remaining.

“We knew it was going to be a long second half and we knew what we had to do,” Rodriguez said. “We got a lot of open looks, but for some reason [Virginia] found a way to score, they got to the line a little more than us. To be honest, they move so much and move so well it’s hard to keep up with everything they do… the bottom line is that they’re a tough team to guard.”

Added Virginia coach Tony Bennett: “Rodriguez is as quick as they come. He got to the lane at will on us and we had no answer. … They missed sometimes more than we stopped them but we had enough stops and big plays.”

Jekiri then came up with a steal, which set up a good look from downtown for Ivan Cruz Uceda, but the 6-foot-10 senior misfired and Perrantes, who came in averaging 21 points a game against Miami in his career as Larranaga pointed out, delivered the final dagger moments later.

“We missed some open threes that I think were great shots,” said Larranaga. “Maybe there was one that was ill-advised, but every other one, I would have taken as good execution, but we didn’t make it just like we didn’t make the free throws.”

Virginia was 15 for 17 from the line in the second half alone. Miami shot 10-17 at the foul line for the night, but the most important miss came on the front end of a Rodriguez one-and-one with 48 seconds left, trailing by five.

After a rather slow start for both sides, the Cavaliers grabbed an early six-point edge midway through the opening half before the Hurricanes went on a 7-0 run to take their first lead at 14-13, capped by a tough Angel Rodriguez triple from the corner that temporarily quieted the crowd.

Virginia got a lift from both Anthony Gill and Mike Tobey, who combined for 19 points and 12 rebounds in the first half as the Cavaliers led 27-23 at the break. UVa outscored Miami 18-8 in the paint and 9-2 in second-chance opportunities in the first half.

UM sophomore guard Ja’Quan Newton provided an offensive spark off the bench with six first-half points, but was held scoreless for the duration. Starting forward Kamari Murphy picked up a pair of fouls and sat all but six minutes of the opening half.

Murphy picked up his third a few minutes into the second half and played 17 minutes on the evening.

Jekiri led Miami with six rebounds, as UM lost the overall battle of the boards, 35-27.

UVa was led by Brogdon’s 20 points, 14 of which came after the break, while Gill wound up with 15 points and eight rebounds. Perrantes scored all 13 of his points in the second half.

The Hurricanes will look to bounce back with two more ACC road games on the horizon – Saturday at Clemson and then next Wednesday at Boston College.

“This league is so good – there are so many talented players…,” said Larranaga. “I just feel like every night, you’ve got to really play well, especially on the road.”

-Miami is 10-8 overall in the all-time series against Virginia, and 3-6 on the road.

– In the all-time series between Miami and Virginia, never have both teams been ranked for the contest.

-The Hurricanes had their eight game winning streak snapped.

-Miami’s starting lineup of Angel Rodriguez, Sheldon McClellan, Davon Reed, Kamari Murphy and Tonye Jekiri made their eighth appearance of the season. Miami suffered its first loss with this lineup to open a game.

-Angel Rodriguez led the Hurricanes with 17 points, connecting on 6-of-13 shots from the field.

-Rodriguez has scored in double-digits in 10 games.

-Sheldon McClellan and Davon Reed also finished in double figures as they totaled 13 and 11 points, respectively.

-Reed has grabbed at least three rebounds in every game but vs. Charleston. Reed finished the game with five rebounds.

-Reed has hit three-or-more free throws in every game but four (vs. Utah, Florida, Syracuse, Virginia).

-McClellan also has a steal in every game but two (vs. Charlotte and Princeton).

-James Palmer has an assist in seven of the last eight games.

-Rodriguez has knocked down a 3-pointer in every game but three (La Salle, Syracuse, Florida State).

-Kamari Murphy has at least one block in nine of the last 10 games.

-Ivan Cruz Uceda has knocked down at least one 3-pointer in every game except two, at Nebraska and vs. Florida, including six-straight outings.

-The Canes are 1-4 against Virginia under Coach L.

– Miami is 7-39 in true road games against teams ranked in the top 15 in at least one poll.

– Miami is 3-8 in true road games under Coach L against teams ranked in the top 15 in at least one poll.

– Miami is 1-1 against the Cavaliers when the Canes are ranked in the top 10.

– Miami is 0-4 against Virginia when the Cavaliers are ranked in the top 25.