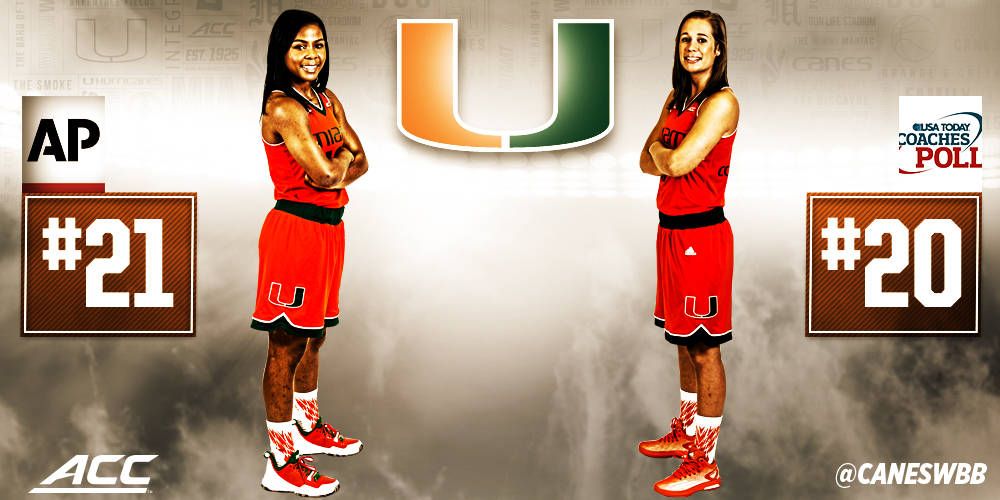 CORAL GABLES, Fla. – For the fourth time this season, the University of Miami women’s basketball team is ranked in the Top 25 of both of The Associated Press and the USA TODAY Coaches polls.

After a one-week hiatus from both, the Hurricanes earned the No. 21 spot in the AP Poll released Monday and checked in at No. 20 in the Coaches Poll released Tuesday.

The No. 21 ranking by the AP marks Miami’s highest spot in the poll this season, while the No. 20 position in the Coaches Poll equals its top mark in 2015-16.

The Hurricanes jumped seven spots in both polls after a 2-0 week that included a 79-55 home victory over Pittsburgh and an 83-49 road win at Clemson. Miami (15-2, 3-1 ACC) did not trail at any point in either contest.

After receiving 43 votes in the AP Poll last week, Miami earned 121 this week, nearly tripling its total and finishing just three shy of its season high. The Hurricanes received multiple top-15 votes and appeared as high as No. 13 on a ballot. In addition, head coach Katie Meier’s team went from 62 points in the Coaches Poll last week to 150 this week.

The Hurricanes are among five ACC teams in the Top 25 of both major polls, while five others are receiving votes in at least one of them. Miami is tied for third in Division I in victories and ranks No. 11 in winning percentage at .882.

The Hurricanes are back in action Thursday night at 7 p.m. when they host Wake Forest at the BankUnited Center.