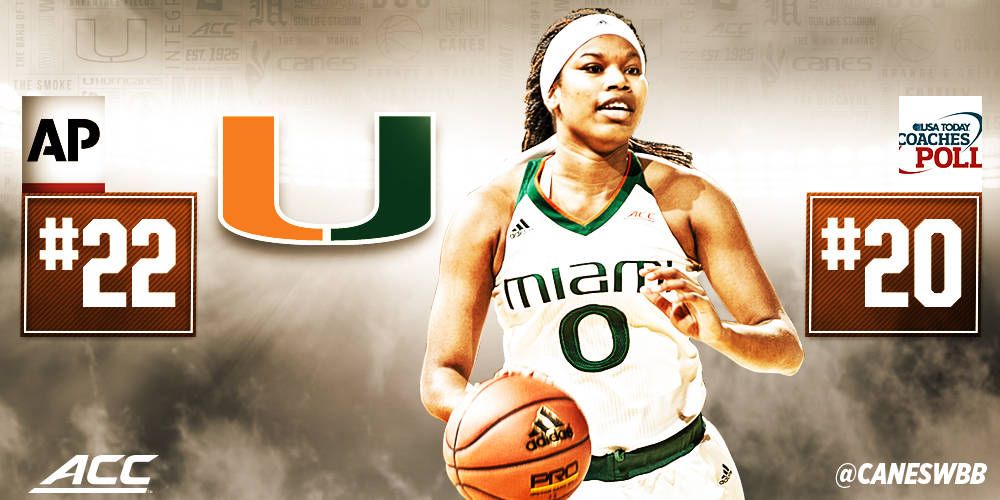 CORAL GABLES, Fla. – The University of Miami women’s basketball team is ranked No. 22 in this week’s Associated Press Poll and No. 20 in the USA TODAY Coaches Poll.

This is the third-consecutive week in which Miami (12-1) has been nationally ranked in both major polls.

The Hurricanes moved up one position in the AP Poll released Monday afternoon, after checking in at No. 23 in each of the past two weeks. Miami earned multiple top-15 votes this week, and appeared as high as No. 12 in the balloting.

In the Coaches Poll released Tuesday afternoon, the Hurricanes held their spot at No. 20 in the nation. After playing just one game last week, an 83-55 home win over FIU, this was the first time all season Miami did not move up in the Coaches Poll voting all season.

Miami is one of four ACC schools ranked in the Top 25 of each poll. Two additional schools are receiving votes in both of them and one garnered votes in just the Coaches Poll.

Head coach Katie Meier’s team is tied for second in Division I in victories and is also tied for ninth in winning percentage (.923).

The Hurricanes begin conference play Wednesday night at 7 p.m. at the BankUnited Center when they host NC State.