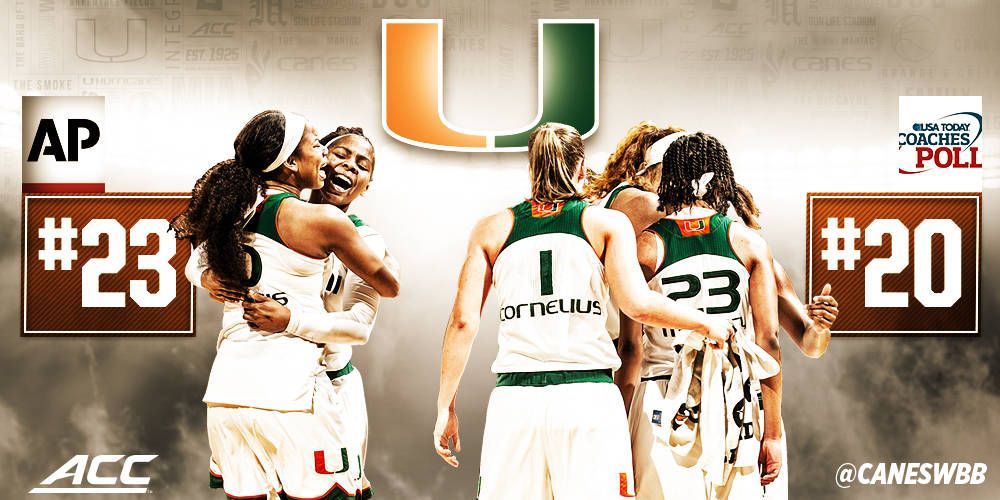 CORAL GABLES, Fla. – The University of Miami women’s basketball team is ranked No. 23 in this week’s Associated Press Poll and No. 20 in the USA TODAY Coaches Poll.

Miami (11-1) has now been nationally ranked in both major polls in back-to-back weeks for the first time since the final polls of the 2011-12 season.

The Hurricanes held steady at No. 23 in the AP Poll, released Monday, but added an additional 26 points since last week. Miami has gone from one point to 124 in a span of four weeks in AP voting.

In the Coaches Poll, released Tuesday, the Hurricanes rose one spot to move into the top 20 of the polls. It is also the first time since the final poll of 2012 Miami is ranked in the top 20. Head coach Katie Meier’s team added 42 points since last week, garnering 180 in Tuesday’s balloting.

Miami is one of four ACC schools ranked in the Top 25 of each poll, while there are two others receiving votes in both.

The Hurricanes are tied for No. 10 in Division I in winning percentage (.917), while their 11 wins are tied for third nationally.

Miami wraps up nonconference play Tuesday afternoon at 2 p.m. against FIU at the BankUnited Center.