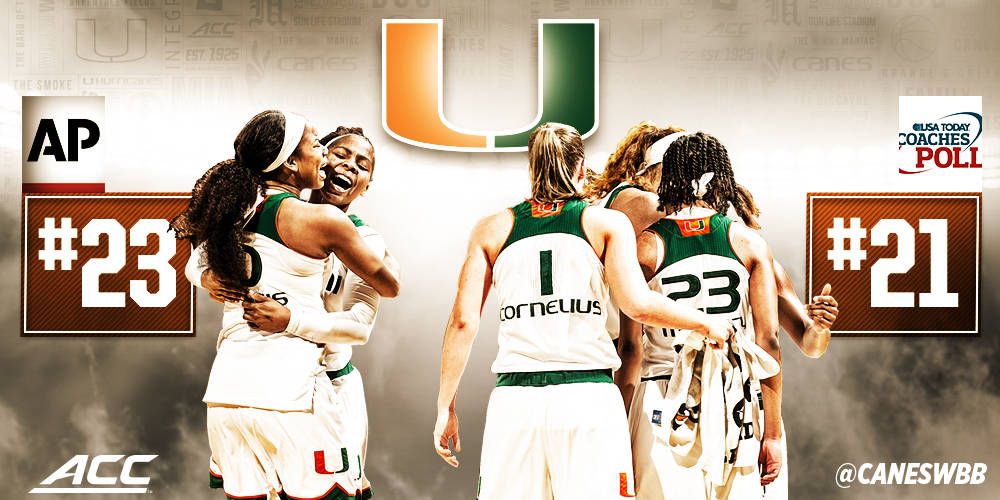 The Hurricanes vaulted into the Top 25 at No. 22 last week and have picked up an additional 20 points to rise one spot.

Miami also reached the Top 25 of The Associated Press Poll yesterday, checking in at No. 23. That made the Hurricanes a consensus Top 25 team for the first time since the week of Jan. 7, 2013.

Additionally, this marks the first time since March of 2012 that Miami is nationally ranked in the Coaches Poll in consecutive weeks.

Miami is one of four ACC schools ranked in the Top 25 of both major polls, while two others are receiving votes in each of them.

Head coach Katie Meier’s team is 10-0 on the season and tied for the national lead in victories, along with Baylor, Maryland and Missouri. The Hurricanes, off to the second-best start in program history, are one of just 14 unbeaten teams left in Division I.

Miami returns to action against No. 4/4 Baylor, another one of the nation’s remaining undefeated teams, on Dec. 19 at 7 p.m. The Hurricanes and Bears will square off in Winter Park, Fla. as a part of the Florida Sunshine Classic.