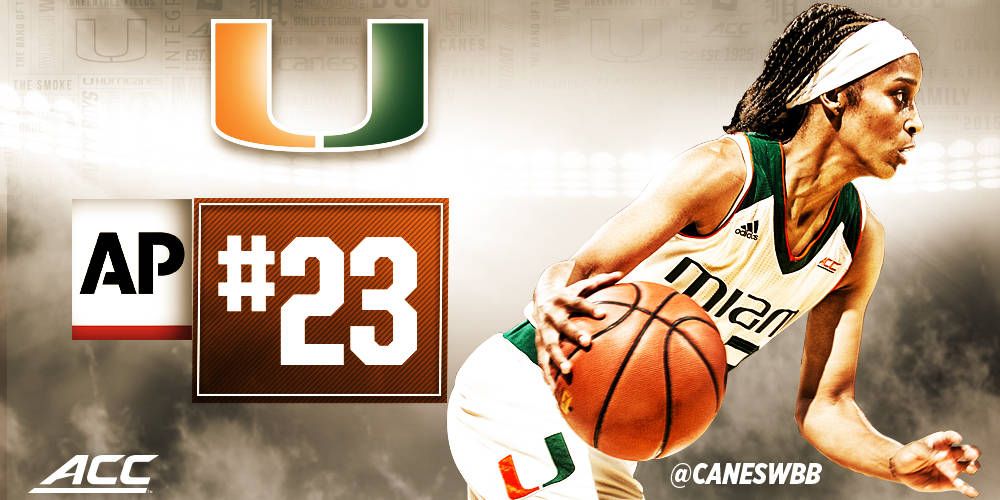 CORAL GABLES, Fla. – After checking in at No. 22 in the USA TODAY Coaches Poll last week, the University of Miami women’s basketball team has now entered The Associated Press Poll’s Top 25 for the first time in 2015-16.

After a steady climb up the receiving votes category of the polling, the Hurricanes reached the No. 23 position of the ranking released Monday afternoon.

Miami received one point in the AP Poll in the preseason and the first two weeks of the season, before earning 13 on Nov. 30. The Hurricanes received 78 points in last week’s poll and now break into the Top 25 with 98 points.

At 10-0 on the season, head coach Katie Meier’s team is tied for the national lead in victories and is one of just 14 unbeaten teams left in the country. Miami is the lone undefeated team in the ACC, which has four teams in the AP Top 25 and two others receiving votes.

In addition to its AP Poll ranking, Miami holds the No. 23 spot in the NCAA’s updated RPI ranking released Monday morning and has a victory over the eighth-ranked team on the list, Illinois. The updated Coaches Poll will be announced Tuesday afternoon.

The Hurricanes will face one of the nation’s other remaining unbeaten teams in their next game when they take on No. 4/4 Baylor Dec. 19 at 7 p.m. in the Florida Sunshine Classic in Winter Park, Fla.