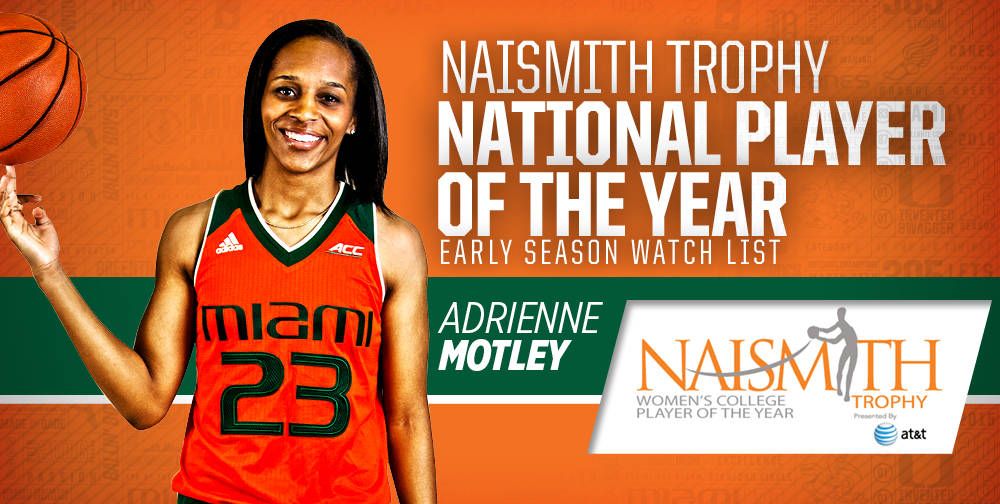 CORAL GABLES, Fla. – Adrienne Motley of the University of Miami women’s basketball team was selected as one of 50 members of the 2016 Naismith Trophy Women’s College Player of the Year Early Season Watch List, as announced Wednesday by the Atlanta Tipoff Club.

A junior guard, Motley is averaging 16.1 points per game while shooting 50.4 percent from the field. Additionally, she is posting 4.3 rebounds, 3.4 assists and 1.7 steals per game.

As of the announcement, Motley, a Preseason All-ACC selection by the ACC Coaches and Blue Ribbon Panel, ranked first in the ACC in assist/turnover ratio (2.8:1) and sixth in scoring, as well as in the top 15 in field goal percentage and assists.

Motley was the lone player to finish in the top 15 in the conference last season in scoring, field goal percentage, 3-point percentage and free throw percentage. She was tabbed as a First Team All-ACC choice by the ACC Coaches and the Blue Ribbon Panel.

The Newport News, Va., native is one of seven ACC players on the Naismith Early Season Watch List and one of just 26 non-seniors to receive the honor.  The full list of 50 players can be found HERE.

Motley has helped lead the Hurricanes to a 10-0 mark this season, the second-best start in program history. Miami was ranked No. 22 in the USA TODAY Coaches Poll released Tuesday.

ABOUT THE NAISMITH TROPHY

The Naismith Awards were founded by the Atlanta Tipoff Club to recognize accomplished athletes, coaches, officials and contributors to high school and college basketball. Named in honor of Dr. James Naismith, the creator of the game of basketball, the first Naismith trophy was awarded in 1969 to UCLA’s Lew Alcindor, later known as Kareem Abdul-Jabbar. The trophy was sculpted by Marty C. Dawe of Atlanta and has become among the most prestigious national honors awarded each year to top basketball players in the nation. The Women’s Player of the Year Award was first given to Anne Donovan of Old Dominion University in 1983.

Each year the club’s board publishes the “Naismith Watch” list that is made up of the top 50 players to watch in men’s and women’s college basketball. The organization also releases a list of 30 mid-season Naismith candidates. At the end of the season the Naismith Trophy is awarded to the player of the year in men’s and women’s college basketball. A national voting academy of leading basketball coaches, administrators and journalists narrows the group down to four finalists based on player performance throughout the season. The final four Naismith finalists will make up the ballot and the player of the year is voted on by the group.