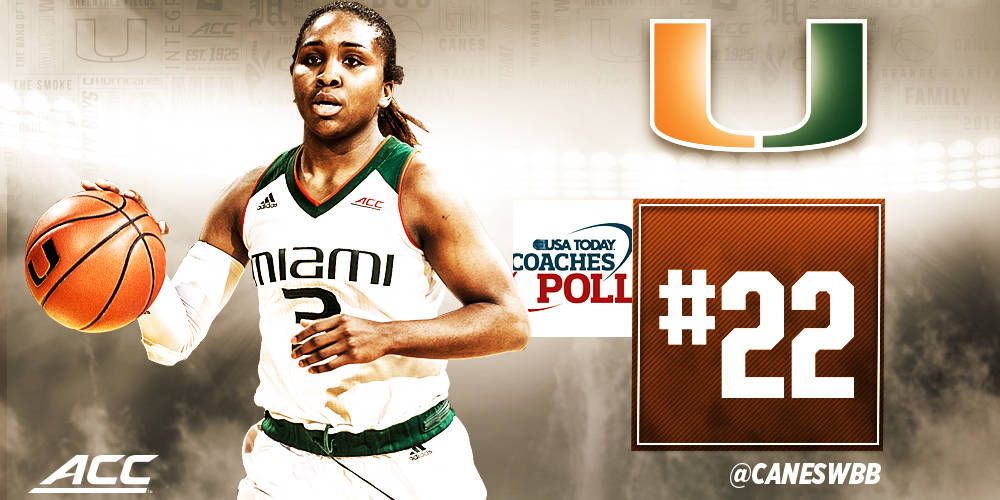 @CanesWBB Ranked No. 22 in Coaches Poll

CORAL GABLES, Fla. – The University of Miami women’s basketball team entered the top 25 for the first time this season, placing No. 22 in the country in the USA TODAY Coaches Poll released Tuesday afternoon.

It marks the first time since the week of Jan. 7, 2013 that the Hurricanes are nationally ranked. That week, Miami was No. 24 in The Associated Press Poll and No. 25 in the Coaches Poll.

With a 10-0 record, Miami leads the nation in wins and is one of just 16 remaining undefeated teams. The Hurricanes, off to their second-best start ever, are the last unbeaten team in the ACC, which has five teams ranked in the top 25 of the Coaches Poll, plus two others receiving votes.

Miami went from earning 17 points in the Coaches Poll Nov. 24 to 50 last week and now has 118. Moving up five spots since the last release, Miami tied for the largest rise in the poll.

Additionally, the Hurricanes just missed the top 25 in the AP Poll, released Monday, checking in as the top team in the receiving votes category with 78 points, an increase of 65 from the prior poll.

After playing 10 games in the season’s first 24 days, Miami is currently in the midst of a 12-day break before facing No. 4/4 Baylor Dec. 19 at 7 p.m. at the Florida Sunshine Classic in Winter Park, Fla.