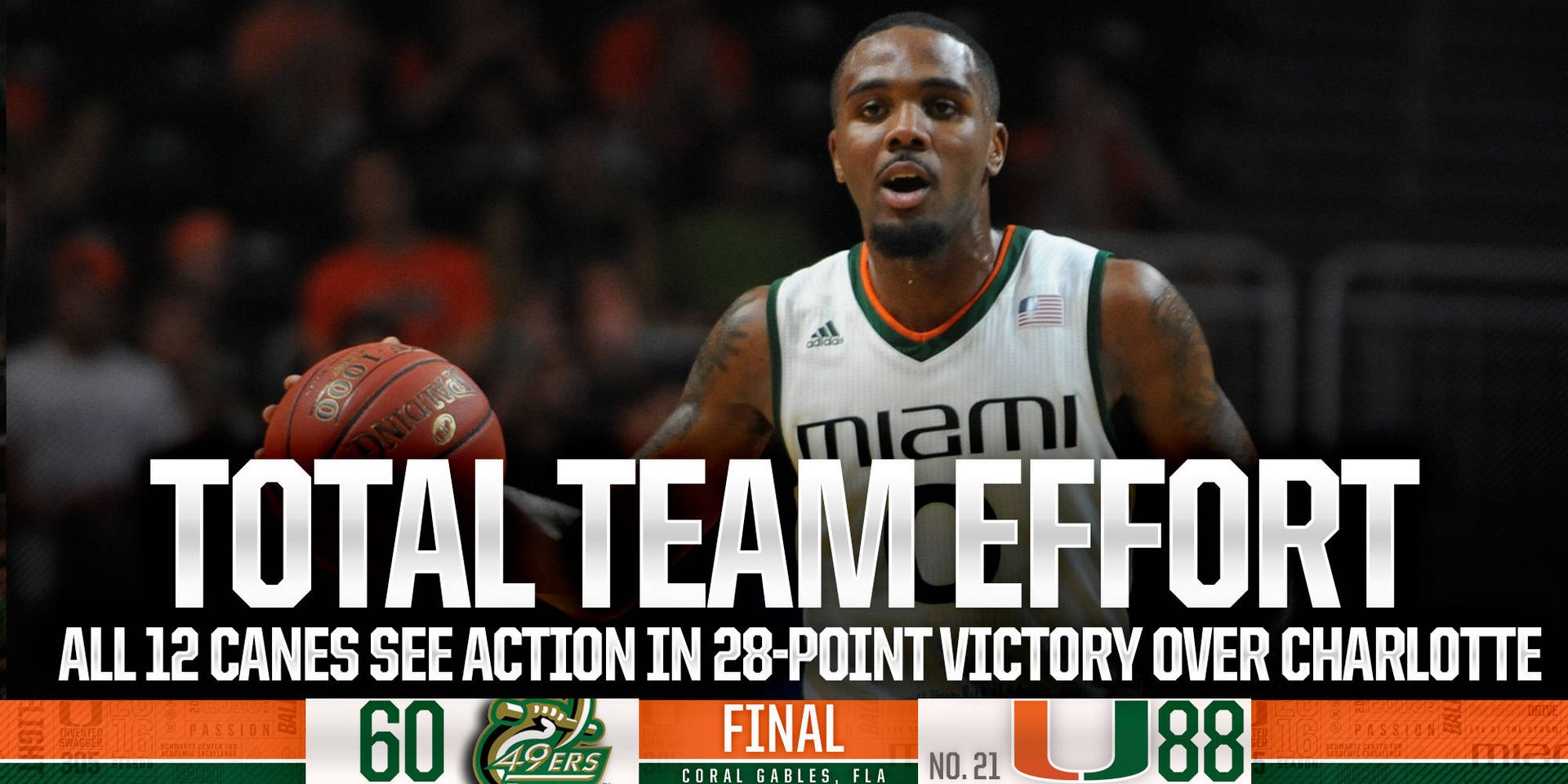 Sheldon McClellan, Miami’s leading scorer this season, did not start because of a nagging lower extremity injury that limited his practice time this week. He had eight points and five assists in 18 minutes off the bench.

Miami is shooting 78 percent from the line this season.

The Hurricanes’ only loss came at home against Northeastern a week ago, and they were determined not to be upset again. Instead they won by at least 24 points for the fourth time.

Joseph Uchebo led Charlotte with 12 points. The rest of the 49ers combined to miss their first 22 shots.

The Hurricanes went ahead 37-10 before going 8½ minutes without a field goal, missing nine consecutive shots.

– Miami opened the game with its third starting lineup of the season: Angel Rodriguez, Ja’Quan Newton, Davon Reed, Kamari Murphy and Tonye Jekiri. Sheldon McClellan wasn’t in the starting lineup due to a lower extremity injury.

– The Canes dished out 19 assists as a team against the 49ers, just short of the season-best of 20 against Mississippi State in the Puerto Rico Tip-Off.

– Tonye Jekiri pulled down five first-half rebounds, the seventh time this season he has been halfway to double-digit rebounds in the first 20 minutes.  Jekiri ended with 10 boards for the game, his seventh game with 10+ rebounds.

– Ivan Cruz Uceda knocked down three shots from long range, his fifth game with multiple 3-pointers made. He has hit at least three from downtown in three outings.

– Ja’Quan Newton tallied 14 points and has scored double-digit points in seven of eight games after only scoring 10+ in four games as a rookie.

– Newton also recorded a season-best six assists, one more than his five against Louisiana and Mississippi State.

– With five rebounds against Charlotte, Davon Reed has grabbed at least three rebounds in every game.

– Kamari Murphy scored a season-best 11 points, topping his 10 at Nebraska. He also grabbed a season-high seven rebounds against Charlotte, topping his best of six vs. Northeastern.

– With one 3-pointer against Charlotte, Angel Rodriguez has knocked down a 3-pointer in every game.

– Sheldon McClellan dished five assists, tying for his career high, which he last recorded at Virginia Tech on March 7, 2015.