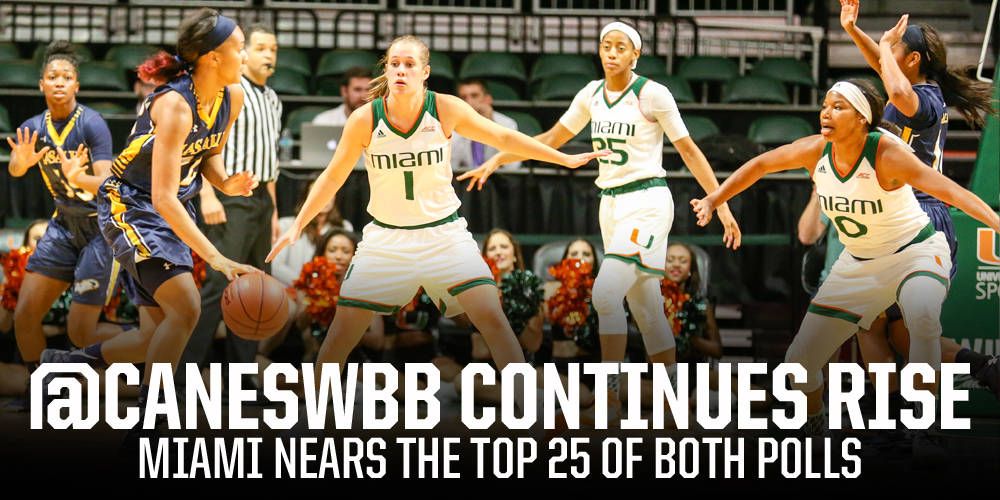 Miami among Top-30 Vote-Getters in Both Polls

CORAL GABLES, Fla. – The University of Miami women’s basketball team continued its ascent in both The Associated Press Poll and the USA TODAY Coaches Poll voting this week.

The Hurricanes are now among the top-30 vote-getters in each poll, placing No. 29 in the AP Poll voting and No. 27 in the Coaches Poll balloting. Miami went from earning one point in last week’s AP Poll to 13 this week and almost tripled its total in the Coaches Poll points, soaring from 17 to 50.

Seven ACC schools garnered at least five points in the Coaches Poll voting, with Miami fifth of that group.

Miami has received votes in both polls every week of the season, as well as in the preseason. The Hurricanes were selected to finish sixth in the ACC by both the ACC Coaches and the Blue Ribbon Panel.

At 7-0, Miami has tied the second best start in program history and are one of just 27 undefeated teams remaining in Division I and one of just two in the ACC.

The Hurricanes will face one of the other unbeaten teams Wednesday night when they take on Illinois at the BankUnited Center. The game is scheduled for 7 p.m. and will be a part of the ninth-annual Big Ten/ACC Challenge.