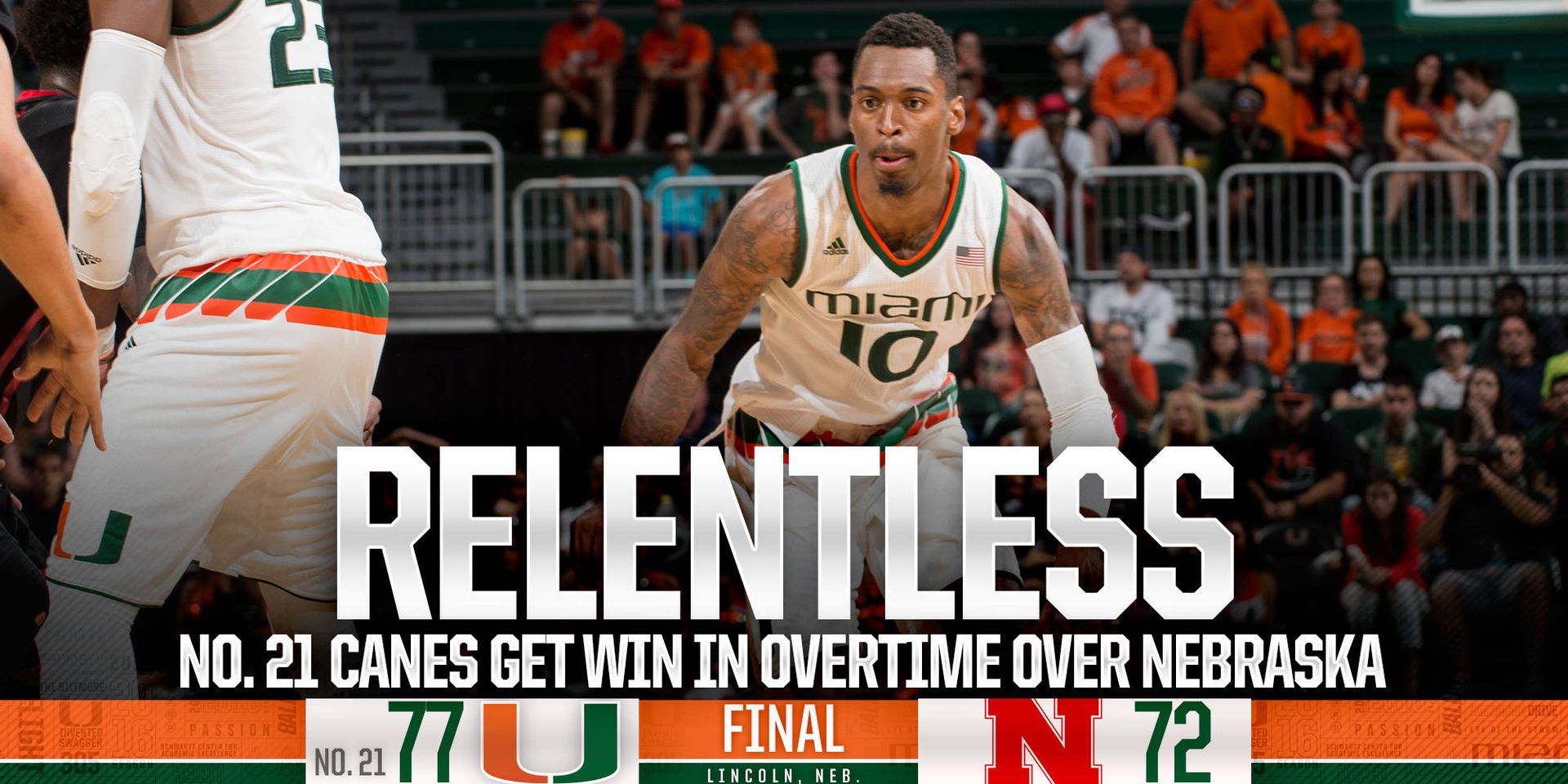 No. 21 Canes Get Win in Overtime Over Nebraska

LINCOLN, Neb. —  Davon Reed’s 3-pointer gave Miami the lead in overtime and the No. 21 Hurricanes made three free throws in the last 15 seconds to beat Nebraska 77-72 in the Big Ten/ACC Challenge on Tuesday night.

Angel Rodriguez scored 15 points, Sheldon McClellan had 14 and Anthony Lawrence added 13 for the Hurricanes (6-1), who shot a season-low 41 percent. Miami made 23 of 28 free throws and outscored the Huskers by 14 at the line.

Shavon Shields scored a season-high 28 points for the Cornhuskers (5-3). Andrew White III had 13 points and Glynn Watson Jr. added 11, including the tying 3-pointer with 18.9 seconds left in regulation.

Reed had missed all eight of his shots in regulation before making a 3 from the wing with 2:36 left in overtime to put Miami ahead 71-70. The lead was 3 points after Kamari Murphy followed with a dunk.

The Huskers, trying for their first win over a ranked nonconference opponent since 2007, used their 3-point shooting and Shields’ scoring to keep it close throughout. They made their first five 3-pointers, 6 of 9 in the first half and 9 of 18 for the game.

Shields scored nine straight points for the Huskers late in the first half, and they trailed 37-36 at the break.

But they had difficulty dealing with Miami’s size and kept sending the Hurricanes to the line.

Shields’ one-handed spinning shot in the lane with 4:08 left in regulation put Nebraska up 61-60, its first lead since the middle of the first half, and the Huskers were ahead 65-64 in the last minute after Andrew White III’s steal and layin.

Miami regained the lead on its next possession. Rodriguez nearly traveled before moving to his left on the right wing and lobbing the ball underneath to Kamari Murphy, who softly put it in. Rodriguez then swiped the ball from Jack McVeigh and went in for a layup to make it 68-65.

Watson’s 3 tied it, and the game went to overtime after Rodriguez was well off the mark with his long shot at the buzzer

-Miami improved to 2-4 all-time in the series against Nebraska. The series dates back to the 1951-52 season.

-The Hurricanes moved to 1-2 all-time on the road at Nebraska.

-Five Hurricane players finished in double figures. This is the fourth time Miami has had five players reach double digits in scoring.

-Miami’s bench outscored Nebraska 23-16. The Hurricanes own a 193-142 advantage in bench scoring over their opponents this season.

-Miami owned a 41-34 advantage on the glass. The Hurricanes have outrebounded its opponents in five games this season. Miami is 66-17 under head coach Jim Larrañaga when outrebounding its opponents.

-Senior guard Sheldon McClellan collected his 1,500 career point in the first half. McClellan finished the game with 14 points.

-Senior Angel Rodriguez poured in a team-high 15 points on 5-of-11 shooting. He has scored in double figures in each of his last six games.

-Freshman guard Anthony Lawrence, Jr., scored a career-high 13 points off the bench. He also pulled down a career-high seven rebounds.

-Redshirt junior Kamari Murphy finished in double figures with 10 points. He is the 10th Miami player to reach double figures in scoring this season.

-Sophomore guard Ja’Quan Newton netted 10 points off the bench. Newton has scored 10-or-more points in six of the Hurricanes’ seven games this season.

-Senior center Tonye Jekiri finished with a game-high 10 rebounds. Jekiri has pulled down 10-or-more rebounds in six of the Hurricanes’ seven games this season.

-Miami improved to 16-9 under Larrañaga in the month of December.